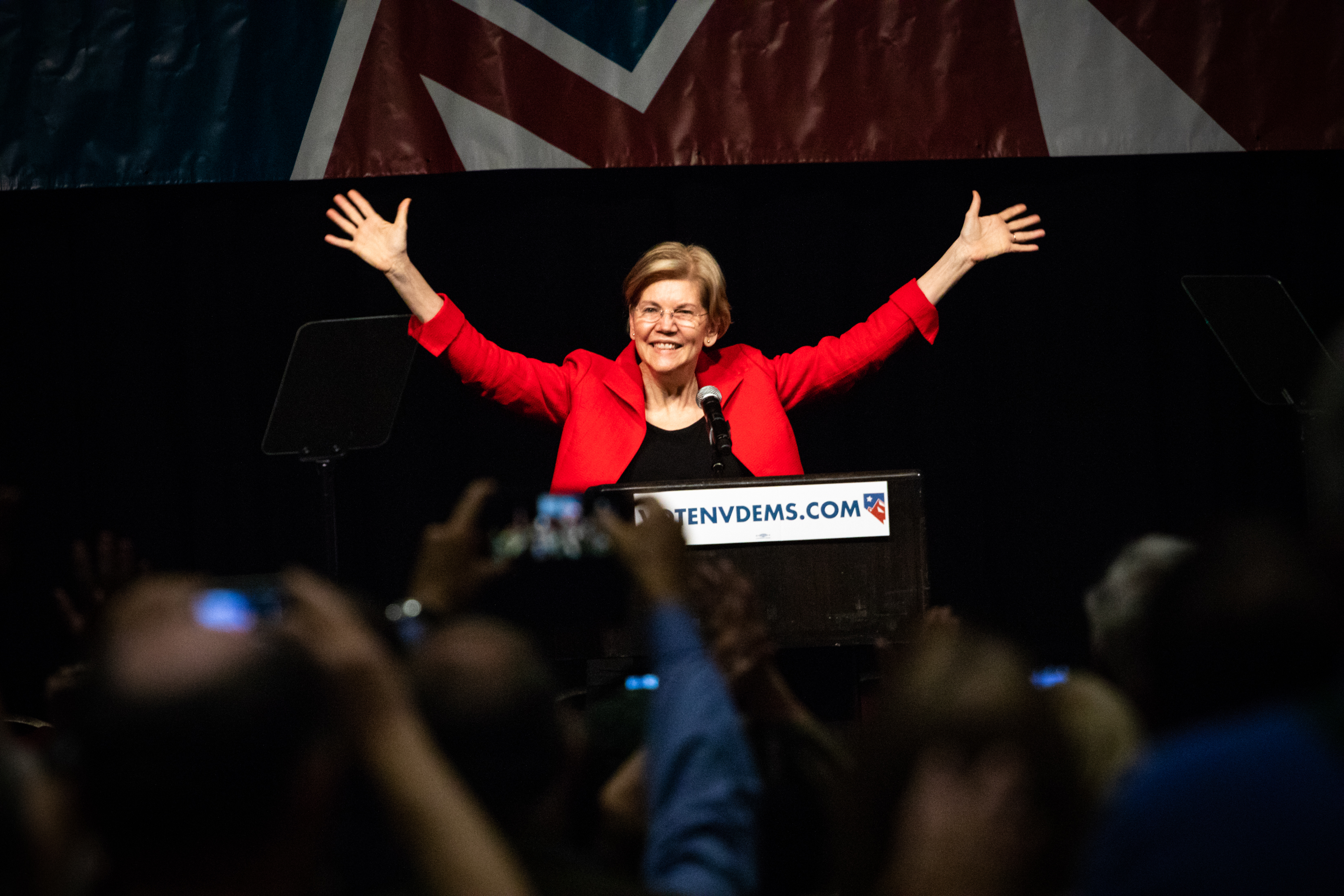 The Best Policies From Every 2020 Democratic Candidate

There officially 19 candidates trying to win the Democratic nomination for president in 2020, and that shockingly does not even include Joe Biden, who is rumored to be declaring on Thursday. While keeping track of 19 different people’s policies, brand, background, and general vibe can be tough, the primaries are sooner than you think (it Iowa caucus is less than a year away), so it’s probably a good idea to start thinking about who you’re going to vote for and why. Unless you’re voting for Trump in which case…you do you, I guess.

We’ve rounded up some of our favorite policies from each of the 2020 candidates so you can get a jumpstart on figuring out who you’ll be stanning come primary day. Oh, and so you can be that b*tch on Twitter who knows everything and annoys everyone. Either/or.

Bernie Sanders: Medicare For All

Bernie’s leading policy proposal (of many strong ones) is Medicare For All. In fact, it’s so strong almost all of the candidates have come out and said #MeToo (but like, the good kind of #MeToo where they co-sponsor a bill that would give us all affordable health care). Basically, the plan would implement a government run single-payer health insurance model where individuals don’t have to pay out of pocket when they receive care. This would hypothetically be paid for by taxing America’s wealthiest 1%-ers. I personally love the idea of Elon Musk footing the bill for my anxiety meds, but that’s just me.

Sen. @BernieSanders challenged Trump to release his tax returns and made a strong case for Medicare for All on *checks notes* Fox News pic.twitter.com/jBd2ehaaGA

Senator Kamala Harris proposed a policy shift on gun control this past week at her CNN town hall. In it, Harris said that she would give Congress 100 days to pass gun reform legislation. If they don’t (which they won’t) she’d then sign an executive order mandating background checks for customers of anyone who sells more than five guns per year. Wait…the government is allowed to take action on gun reform? I’m shook.

Elizabeth Warren is out here dropping policies like she is an early aught’s Lil Wayne dropping mix-tapes. But since we have to choose one, this week Warren released a proposal called Cancellation of Student Loan Debt and Universal Free Public College, which would allow the federal government to forgive $50,000 in student loan debt for every person with a household under $100,000 (aka an estimated 42 million Americans) and eliminate college tuition at almost all colleges and universities. She’d pay for this by – say it with me now – taxing the rich. As if that isn’t tantalizing enough, Liz also wants to get rid of the Electoral College, break up big tech like Facebook and Google, stop drilling on public lands, and she was the first candidate to call for Trump’s impeachment. Honestly, start a book club and each month deep dive into her policies with a generous pour of a buttery Chardonnay because listing them all might take a while.

Student loan debt is crushing millions of families. That’s why I’m calling for something truly transformational: Universal free college and the cancellation of debt for more than 95% of Americans with student loan debt. Read all about it here: https://t.co/IG9J5CiNb7

Earlier this month Julián Castro laid out an immigration plan that would reverse Trump’s travel ban and decriminalize illegal border crossings. Castro is the first 2020 candidate to provide such a detailed immigration plan and policy wonks are going bananas for it. Frank Sharry, the director of the liberal immigration group America’s Voice told the Texas Tribune, the Castro “got his wonk on, and wonks appreciate it.” Side note: can we stop with the word wonk? It’s kind of…wonky.

My family’s story wouldn’t be possible without a country that challenged itself to live up to the promise of America. That was the point of the #AmericanDream: It wasn’t supposed to be just a dream. America was the place where dreams could become real. /1

Booker has long been active and passionate about Criminal Justice reform. After Trump signed the First Step Act (aka the one Kim K. worked on), Booker proposed The Next Step Act which further reforms sentencing guidelines, improves prison conditions, restructures law enforcement practices and training, and “bans the box” which prohibits employers from asking about criminal history in the early stages of interview processes. Also – and this is less of a policy and more of a fun fact – he is dating Rosario Dawson which means we’re one parallel universe away from First Lady Rosario Dawson. Think about it.

Beto O’Rourke shockingly proposed an education reform policy that mandates all students must learn to ollie before being able to graduate. Seems unorthodox but extremely gnarly – okay that isn’t true. O’Rourke backs most of the popular Democratic platforms, and has led the pack on being vocal about marijuana legalization. He wants to end the federal prohibition of da good stuff and expunge criminal records of non violent marijuana offenses. Not only does he want it legal, but he’s proposed expanding government funded research of cannabis. So actually, I’m going to stand by my description of calling him “extremely gnarly.”

Mayor Pete has come out as a really strong contender this primary season, despite nobody know who he was like, 2 months ago. Pete has a lot going for him: a compelling story, inspirational speeches, the ability to speak 8 languages, a cute husband named Chasten, and two rescue dogs. What he doesn’t really have are policy proposals. When asked why his website does not have a policy section by Anderson Cooper at a CNN town hall, he said he thinks “it’s important we don’t drown people in minutiae before we’ve vindicated the values that animate our policies,” and that his website was being update with policy videos ASAP. Hmm…how do you say “you should really get on that” in 8 languages?

Mayor Pete Buttigieg: “It’s important that we not drown people in minutia before we’ve vindicated the values that animate our policies.” pic.twitter.com/ys1LuymKpS

Senator Gillibrand has firmly been an advocate for paid family leave and introduced the FAMILY Act, which guarantees new parents 12 weeks of paid leave from work, which is a f*ckload better than the zero guaranteed weeks of family leave the U.S. has now. The downside? few more parent-friendly policies like this and I might actually consider procreating.

Passing paid family leave is the right thing to do for workers, for families and for our national economy—and we can get it done now with the #FAMILYAct. I won’t stop until we do. pic.twitter.com/iQ7ymn62fe

Surprise surprise, the Senator from Minnesota has views on agriculture exports. While potato farming isn’t incredibly flashy, it is critical to our economy and actually pretty important.  Klobuchar wants to make it easier to export farming products and lift tariffs discriminating against US agriculture producers. So she’s like trying to make our smoothies cheaper and healthier? Okay cool.

Big news in the Senate! I’m on the Ag Committee and we’ve reached a bipartisan agreement on a new Farm Bill that will help strengthen Minnesota’s rural economy. This is what we can accomplish when we put politics aside and come together to create real solutions. pic.twitter.com/YuSVrKIlnL

While maybe not the most talked about candidate,  but Andrew Yang is an entrepreneur and philanthropist wants to introduce a universal basic income for all Americans.  He’s proposing $12k a year ($1k/mo) for all Americans over the age of 18. He believes this will grow the economy by 13% by 2025. Does this make him the world’s first ethical billionaire? Perhaps!

Low and behold a 68-year-old white man is taking on climate change in this election, which is honestly very cool (just like the Earth should be – zing!). Jay Inslee is the governor of Washington State and wants us to capitalize on green energy to grow our economy and save the planet. Yes, he’s a long-shot candidate, but at the very least his campaign will have very cute totebags so hop on that!

I have decided to run for president to make sure that climate change is the number 1 priority of the United States. But we need 65,000 donors to put climate change front and center in the Democratic debates in June. Can I count on you? Donate here: https://t.co/qMSjloeHNk. pic.twitter.com/JHWaQJYd2z

You may not have heard of Marianne Williamson, an activist and author from Houston, Texas, who is most known for being Oprah’s spiritual adviser. Yes, that’s serious. Williamson has proposed $100 billion in reparations for slavery to help heal our country’s racial divide. Not bad for a white lady named “Marianne.” Also – and I cannot emphasize this enough – Williamson’s literal job is “spiritual adviser to Oprah”. That is enough of a policy for me. No more details needed.

Eric Swalwell wants to take your guns. Like, literally. And guess what? We love that. He wants to ban assault weapons and has proposed a buy-back plan for current owners, which has been successful in countries like Australia and the United Kingdom. Love those policies (and those accents)!

The right to live is supreme over any other.

We started our campaign with the Parkland community because ending gun violence will be my number ONE priority as President. #EnoughIsEnough

Tulsi Gabbard the congresswoman from Hawaii wants to provide tuition free community college for all and as a former soldier believes we should be less involved in foreign conflict. John Hickenlooper is a pretty centrist candidate who supports common sense gun control and is passionate about reducing green house admissions. John Delaney is also happily in the middle of the road, and while he wants health care reform does not support Medicare For All.  If elected he wants to expand free trade with China. Wayne Messam, the mayor of Miramar, Florida, is similar to Warren in that he wants to erase billions of dollars in student debt and make college affordable again. Just this week Massachusetts representative Seth Moulton announced his candidacy and wants to focus on military spending and using high tech weapons in combat. Congressman Tim Ryan from Ohio is a proponent of policy helping replace manufacturing jobs lost in the Midwest. And then there’s Joe Biden, who hasn’t announced yet but has low-key been in the race this whole time.

So basically, no matter what the issue that most appeals to you is, there’s probably a candidate out here talking about it. So figure out who then start donating, campaigning, and most importantly voting to get them elected. The fate of our democracy depends on it, or whatever.