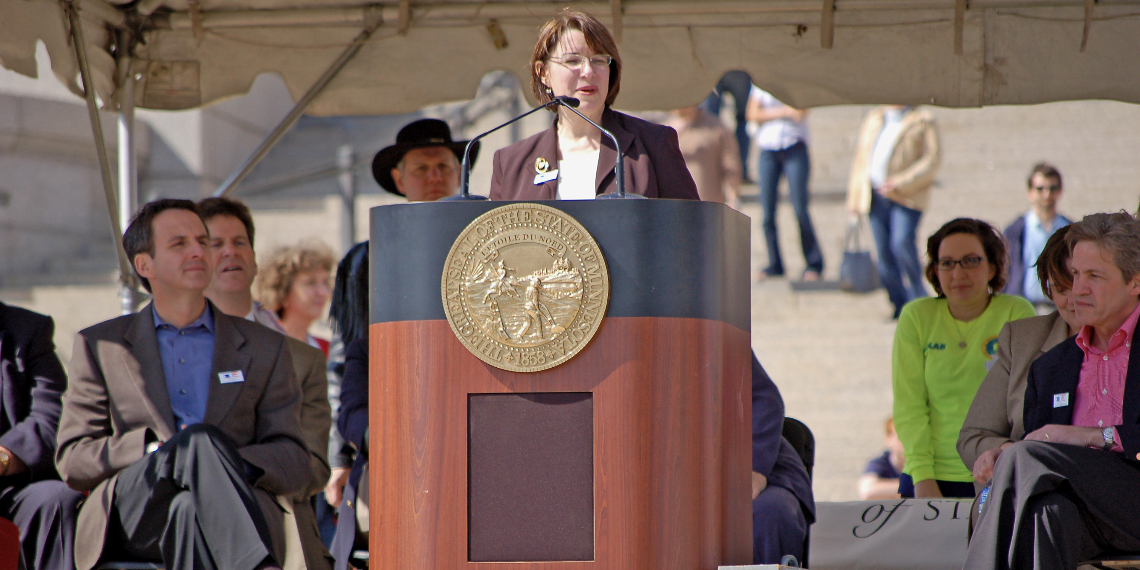 Everything You Need To Know About 2020 Candidate Amy Klobuchar

Another day, another 2020 presidential candidate. They just keep coming. Maybe it’s because the current president is the human equivalent of when you do legit perfect, matching catwings for your eyeliner but then completely fuck it all up at the last minute when adding a finish touch. Just spit ballin’ here. ANYWAY, Senator Amy Klobuchar announced her bid to run for president, so it’s time to get caught up on wtf she stands for. Shall we?

And follow this link to watch the whole speech: https://t.co/xBdHBJzXjo pic.twitter.com/558WCu2OL5

Amy Klobuchar is a Democratic Senator in Minnesota. In fact, she was the first female Senator to ever be elected in Minnesota. Okurrr. She’s been in office since 2006 and now she’s ready to run for prez. Also, it’s important to note that Senator Klobuchar announced her candidacy in a full blown snow storm. And like, people still showed up. Considering I cancel plans with my friends if it’s “too windy,” I’d say this is very impressive and a good sign for her. Unlike the current president, she’s a believer in climate change, and made it a talking point in her announcement speech. She has recently focused her career on healthcare affordability, and believes in universal healthcare. You may also recognize her from the time Brett Kavanugh asked her if she likes beer, as one does during a Senate Judiciary hearing. Additionally, she is concerned with election security, since ya know, the whole Russia hacking our election in their attempt to complete world domination thing.

In response to her announcement, President Trump had this (incredibly dumb) thing to say:

Well, it happened again. Amy Klobuchar announced that she is running for President, talking proudly of fighting global warming while standing in a virtual blizzard of snow, ice and freezing temperatures. Bad timing. By the end of her speech she looked like a Snowman(woman)!

Just in case you needed a reminder that a half-melted snowman(woman) would be a better president than this clown.

I mean, Amy Klobuchar is a badass who graduate magna cum laude from Yale University. She has some great, progressive ideals, mainly when it comes to health care and climate change. She also has an interesting perspective and expertise when it comes to agriculture and trade. Since she is from a farm state, she has had to fight Trump on some of trading tariffs (and has sometimes agreed with him). Klobuchar has made a point to voice her support for rural America, saying she won’t leave it behind like others may. This could potentially mean she could find support in the key primary state of Iowa. Just something to consider.

Also, she trolled Trump on Twitter, which is like, a requirement for all Dem primary candidates at this point.

Science is on my side, @realDonaldTrump. Looking forward to debating you about climate change (and many other issues). And I wonder how your hair would fare in a blizzard? ☃️

Again, something to consider.

BuzzFeed News recently released an article that included statements from anonymous ex-staffers of Senator Klobuchar, claiming that she mistreated them and had a bad temper. According to the report, Klobuchar would sometimes yell and scream, and even throw things. That is…not great.

Senator Klobuchar has also been described as a Centrist, which can be a pro or con, depending on your point of view. She has said that she can stand her ground, but is also willing to find middle ground if it means coming to a solutions. That sounds productive, but could also mean she’s willing to back down and compromise some of her progressive values. In the words of young pop-punk-princess Avril Lavigne: Why is everything so confusing?

Great Q, betch. You can inform yourself more thoroughly on what Amy Klobuchar is all about by visiting her website here. Be sure to follow her on Twitter as well so you can stay up to date with all of her clap backs to Trump’s fugly hair.