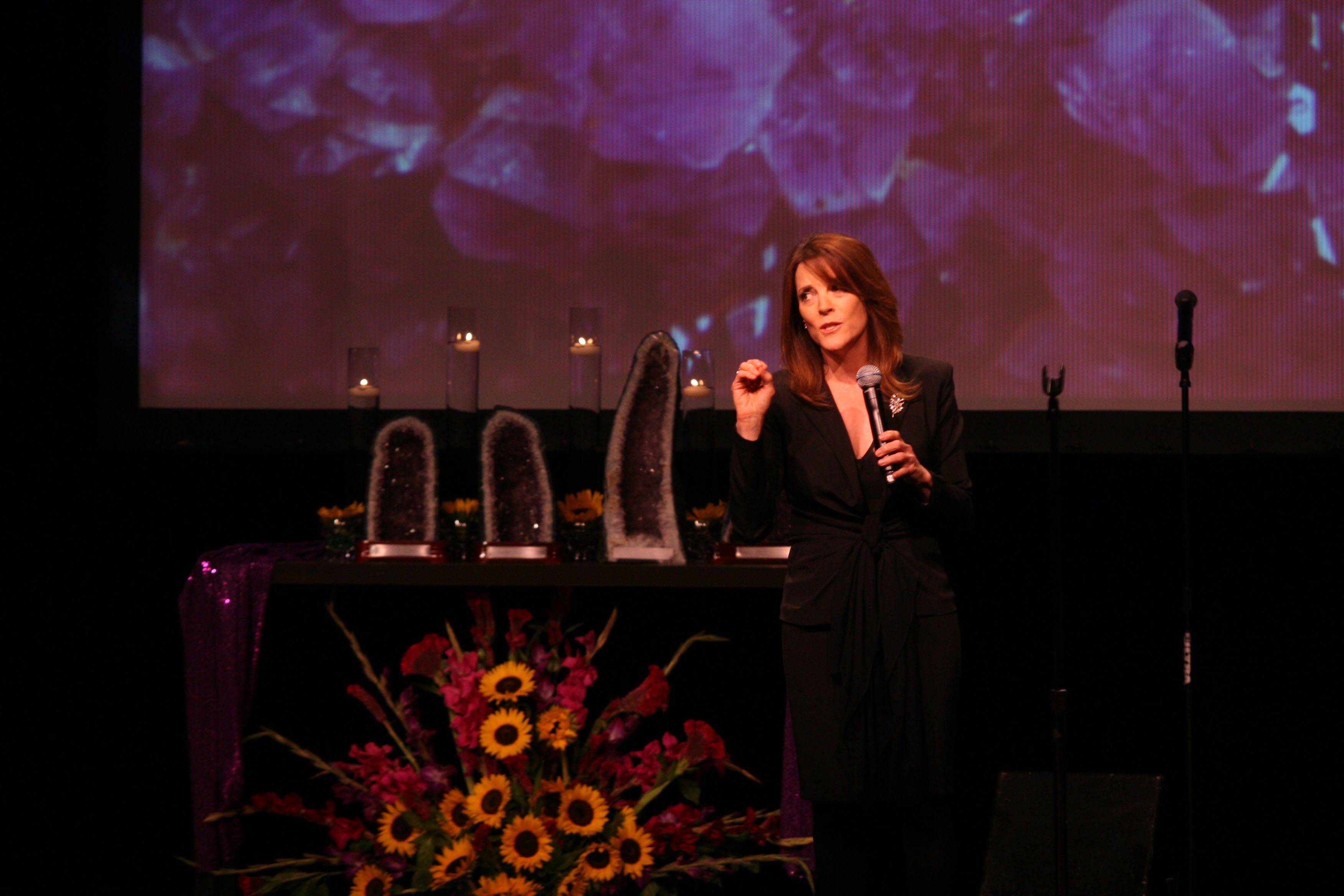 So who is this woman? Great q. her name is Marianne Williamson and here is everything you need to know about her.

We need a moral and spiritual awakening in this country, and nothing short of that will disrupt the patterns of our political dysfunction. We have an immoral economic system, and we need to discuss that. We have millions of American children living in chronic trauma and despair, and we need to discuss that. We have layers of systemic racism that are leftovers of slavery, and we need to discuss that. We prepare for war yet we don’t wage peace; we need to discuss that. Just watering the leaves of our democracy will keep us stuck; we need to water the roots, and those roots are within us. The opponents of democracy are masters of the false narrative. If you respond to them with anything less than the deeply true, they will defeat you. But if you do respond with the deeply true, they cannot touch you. That is how David defeated Goliath; he hit him in the Third Eye. Goliath has no conscience, and it is the one place where he is powerless to defend himself. This is not naive; it is deeply sophisticated. Traditional politics is stuck in old-think, projecting onto a whole person conversation that it is weird or fringe or unqualified. In fact, what is weird and fringe and unqualified is any conversation that remains of the level of the externals and doesn’t know how to address the deeper causes and roots of our problems. It’s too late for that now. It is time to move on. #jointheevolution www.marianne2020.com

What is Marianne Williamson’s Deal?

Have I mentioned she’s Oprah’s spiritual advisor? Great, next order of business: she has referred to herself as a “bitch for God.” Is she…my president? We’ll get to that later. For now, here are some basics about the bitch for God. She’s a renowned spiritual leader and author of popular books such  as A Woman’s Worth and A Return to Love. She has a devoted following which includes A-list celebrities like Katy Perry, Kim Kardashian, Nicole Richie, and Laura Dern. V casual.

And now for some backstory. Marianne Williamson was born in Houston, Texas to an immigration lawyer and a homemaker. She was raised as Jewish and still identifies as such even though a lot of her rhetoric includes Christian values. Like most spiritual leaders, she can’t be pinned down by just one religion. Before her spiritual awakening, Williamson spent some time *finding herself.* She attended Pomona College for a couple of years before dropping out and moving to New Mexico to join a commune. Same. Then she went bicoastal (iconic) and spent her twenties as a cabaret singer on both coasts. In one of her books she admits, “I sank deeper and deeper into my neurotic patterns, seeking relief in food, drugs, people, or whatever else I could find to distract me from myself,” she later wrote in A Return to Love.” Okay, we are RELATING. Put a candidate on the roster who admits to doing drugs and I will listen.

After indulging in a relatable twenties, Marianne set out to help others find the same spiritual guidance she had come into contact with. She began teaching and making public speeches. Her charisma made her a quick leader, and she gained quite a following, specifically in the LGBTQ+ community. She was an activist during the AIDS crisis and worked to provide care for HIV positive people during a time when few organizations and leaders were willing to do so. She ran a weekly support group at the Center for Living, an organization that provided counseling for HIV-positive patients and also founded  Project Angel Food, a charity that delivered meals directly to HIV/AIDS patients’ homes. Okay, go off kween!

Hate to keep bringing this up, but Oprah is a Marianne Williamson stan. And let’s not kid ourselves, having Oprah back you up is a p big deal. One could argue that it is the biggest deal. Williamson has been a guest on Oprah’s show a handful of times, and Oprah said she experienced “157 miracles” while reading Williamson’s book. That’s a lot of miracles.

In addition to being beloved by America’s most beloved figure, Williamson has some v progressive ideologies. She has suggested that as a nation America finds a way to offer reparations the the Black community as a way of making up for the oppression that has been inflicted upon them. She is also v anti Trump, which we love. She has made it clear that her campaign is a direct response to his administration, and that she condemns the hate that he is spreading. She has endorsed Bernie Sanders in the past, and you can take that however you’d like, depending on where you stand with Bernie and his bros.

She’s also very charming and comes off as an unapologetic woman who isn’t afraid to challenge the status quo. She gets the people going, so to speak.

Okay, so her being Oprah’s spiritual guide is a bit of a double-edged sword, because at the end of the day, she is more of a spiritual leader than a politician. She did run for Congress as an independent in LA in 2014, but ultimately lost the race despite raising $2 million for her campaign. Also, while she is seemingly progressive, a lot of her speeches and rhetoric include vague statements like “My campaign is for people who want to dig deeper into the questions we face as a nation and deeper into finding the answers,’’ and “It’s going to be a co-creative effort, an effort of love, a gift of love, to our country and hopefully to our world.” While these sound very nice, they also leave you wondering, “Okay, but what does that even mean and what does that look like policy wise?” Is Marianne Williamson the influencer of presidential candidates?

On top of this, critics have accused Williamson of being a fake. Former employees have claimed she is a bully with a big ego, with one even telling  Entertainment Weekly that Marianne has a “despotic, tyrannical streak and inability even to hear dissent” and that her charitable organizations are all part of a front to “sell her book and increase her own fame.” Williamson has laughed off these accusations.

Where Do I Learn More?

You can visit Marianne Williamson’s website here, where you can also buy her books to better understand her philosophies. You can also follow her on Instagram, where she captions her posts with what I would call “extensive novels.” Or you could call up Oprah and ask her to give you the inside scoop if you happen to have Oprah’s number, in which case please send that to me immediately.