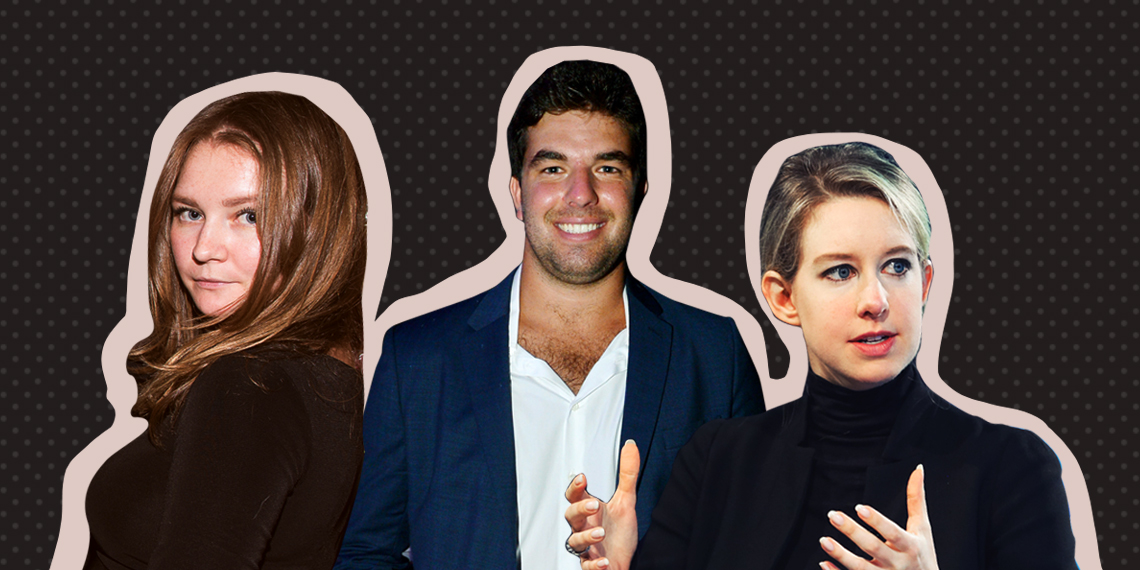 We’re mere months into 2019, and already this year is shaping up to be messier than my IG stories after 12am. If you haven’t been paying attention, then I’m of course referring to the unprecedented amount of scam scandals that have fed the media cycle over the past few months. First, the Fyre Festival documentaries dropped, and I’ve never felt more alive than I did watching a bunch of rich millennials resort to looting and petty thievery for a roll of toilet paper. Then Aunt Becky got caught bribing colleges because her daughter wanted to go to frat parties at USC, and now HBO just dropped a new documentary about disgraced CEO/Silicon Valley “It Girl” Elizabeth Holmes. While these scams aren’t a great look for humanity as a whole, let me just tell you, they are GREAT for my Friday night binge-watching. But all of this makes me wonder: is 2019 the year of the scam?

To be fair, most of the aforementioned scams didn’t actually take place in 2019. But while most of these scandals started hitting the news cycle in 2018, we’re seeing the fallout from said scandals right now in the form of bingeable documentaries and docu-series. I guess it’s like the old saying goes: “one person’s catastrophic f*ck-up is another person’s treasure.”

So the question remains: Why is 2019 acting like my ex who texted me “you’re the one who got away,” and then once I responded in kind, followed up with “oops wrong number”, leaving me feeling bamboozled, hoodwinked, and led astray? What is it about this particular year that is making scammers come out of the woodwork left and right?

Fyre Festival is a metaphor for my love life @sarafcarter

Well, I have some theories.

First, I think we have to talk about the giant heeto in the room: our President. Trump’s Presidency opened doors for a lot of sh*t to come out, and I fully believe one of those doors was scamming. I mean, the man was just investigated for scamming the American people out of a democratic election, for god’s sake!! Then there’s the fact that everything that comes out of his mouth and Twitter feed is about as factually accurate as my Outlander fanfic. It’s no wonder people think they can just lie their asses off, cheat people out of money, and not have to answer to any consequences when our own president freely admits he doesn’t pay his taxes (and that’s one of the less illegal things he’s accused of doing).

Take Elizabeth Holmes, for example. For those of you who don’t know who she is, let’s just say her scam is more dramatic than any plotline Shonda Rhimes has ever concocted. Lizzy—I’m going to call her Lizzy from here on out because I know a Lizzy and she’s also a goddamn mess, so this feels fitting—is the disgraced founder and CEO of the biotech company Theranos. Her whole thing was that she claimed to have invented a blood-testing technology that from one “pinprick’s worth of blood” could test for hundreds of diseases simultaneously. This claim made her a casual billionaire, even though her technology DIDN’T EVEN WORK. Sh*t hit the fan for our girl Lizzy when a reporter actually, like, did his job and realized that she was sitting on a literal throne of lies. I mean, what does it matter if this “world-changing” technology works or not as long as you’re making billions, amiright, Lizzy?

Look, do I think Aunt Becky went into this scandal thinking, “Well, if the leader of this country can be a scam artist, so can I”? No, I don’t. But I do think there’s this underlying understanding in our country that as long as you’re white and rich, you can get away with a lot, including lying and fraud.

And since my therapist says I can’t blame Trump for everything bad that happens (blergh), I guess we as a collective people have to take some responsibility for all of this. We’ve become a country that prides itself on being ostentatious, outrageous even. The more insane you act, the more followers you get, and then the more sponsorship deals you land and the more money you make.

Nobody understood this philosophy of “acting ostentatious = getting money” better than fake socialite and real scammer Anna Delvey. Through the powers of white privilege, sheer confidence, and determination (and check fraud), she was able to convince Manhattan’s richest millennials that she was one of them. Just by flashing cash here and there, she got people to cover her bills for fancy dinners, parties, and even a $60-grand vacation. Her friends never questioned that she was rich and could pay them back, because she seemed to constantly have cash—until she didn’t. But Anna wasn’t content to just live the high life; she upped the ante even further and tried to start a “foundation” (that was really just a glorified art gallery/Magnises clubhouse). She attempted to raise $25 million for her fake foundation, and she got pretty close! She even got linked up with respected venture capitalists, who vouched for her finances even though they knew next to nothing about her. All they knew was that she wore designer clothes and seemed to know what she was talking about, and they filled in the blanks about her net worth and legitimacy. And she almost got away with it!

And look at Billy McFarland, the creator of the greatest music festival there never was. Do I think Billy went into Fyre Festival thinking this would all just be one big scam? Maybe not consciously, no. That doesn’t change the fact that he did actually scam people out of a lot of money. Like the chill $2.8 million he’s been ordered to pay back to all the people he duped into showing up at his 2017 Hunger Games. And if you’re thinking to yourself “Well, Billy got what he deserved in the end”, I ask you, did he really? Sure, he got a six-year jail sentence, but he also gained infamy and a prominent feature in a Hulu documentary (which he got paid for), and that, my garbage friends, is priceless. Think about it. The Fyre Festival happened TWO years ago and we’re still talking about it, talking about Billy, who he is and why he is the way he is. And while I don’t think Billy went into Fyre Fest thinking he would gain infamy in quite this way, I do think that quest for fame and likes is what drove some of his actions.

Fyre Festival hero Andy King has seen the memes, and he has a message for the fans – link in bio

It’s certainly what drove him to continue scamming people WHILE HE WAS OUT ON BAIL. And you know what? People are eating this sh*t up. They’re buying memorabilia from the festival, using memes of Andy King’s face to lament bad dates, and they’re doing this because they love the scam. It’s hilarious and ridiculous and even though it hurt a lot of people and screwed a lot of people over, we still want to be a part of it. That’s why we will listen to The Dropout podcast and watch the HBO documentaries. It’s why we watched two documentaries on the same topic, and read an article in The Cut that was about 9 days long. It’s because we love a good scam—so long as it’s happening to other people.

So, there you have it. 2019 is officially the Year of the Scam. But the scam year didn’t just happen over night; it’s been years of buildup to get us to where we are today. Trump’s presidency may have opened the door to let people get away with way more sh*t than they would have previously (*cough* white supremacy), but with that came the equal and opposite reaction of calling people out on their sh*t—whether that be your racist uncle at the Thanksgiving table or the people running our country. And you know who we’re especially calling out in 2019? The rich and powerful. With the exception of Elizabeth Holmes, all these scammers were rich and famous or scheming to be rich and famous, so we don’t feel bad for them, not really. In fact, we actively root against them. We don’t want to just watch the mighty fall, we want to watch them crash and burn and then keep the burning carcass of their worst mistakes alive for all eternity in the form of a very shareable meme.

Which brings me to my second point: the media. Ten years ago, if the Fyre Festival—or any of these scandals, for that matter—had happened, it would have been a blip on our radars. Before Instagram and social media and news story roundups sent directly to your phone, I used to get my news from, like, The Today Show. And that’s only because my mother refused to see the merit in letting me watch reruns of The Fresh Prince of Bel-Air while I trying to down my Eggos before school! I might have heard about the Lori Loughlin thing, but only if my mom called me up to personally tell me about it. Now, though, it’s impossible not to keep up with these stories. You can watch the Fyre Fest disaster play out in real time, then head over to IG where someone has inevitably made a meme out of someone else’s misfortune. Just when the scandal might die down, bam! Any streaming service suddenly has the rights to the story and has made a movie out of it. And don’t forget the podcasts! My point is, there have definitely been stories about scam artists in the past, but 2019 has amped up the stage for their scams. We’re not just consuming stories anymore, we’re immortalizing them.

So whether the Year of the Scam came to be because of our country’s leadership, the timing of the media, or if it’s just because the American people are flaming piles of garbage who live for messy drama, I can’t definitively say. I can say that if you need me, I’ll be on my couch watching whatever train wreck Netflix recommends to me next. That’s just how the cookie crumbles, people!