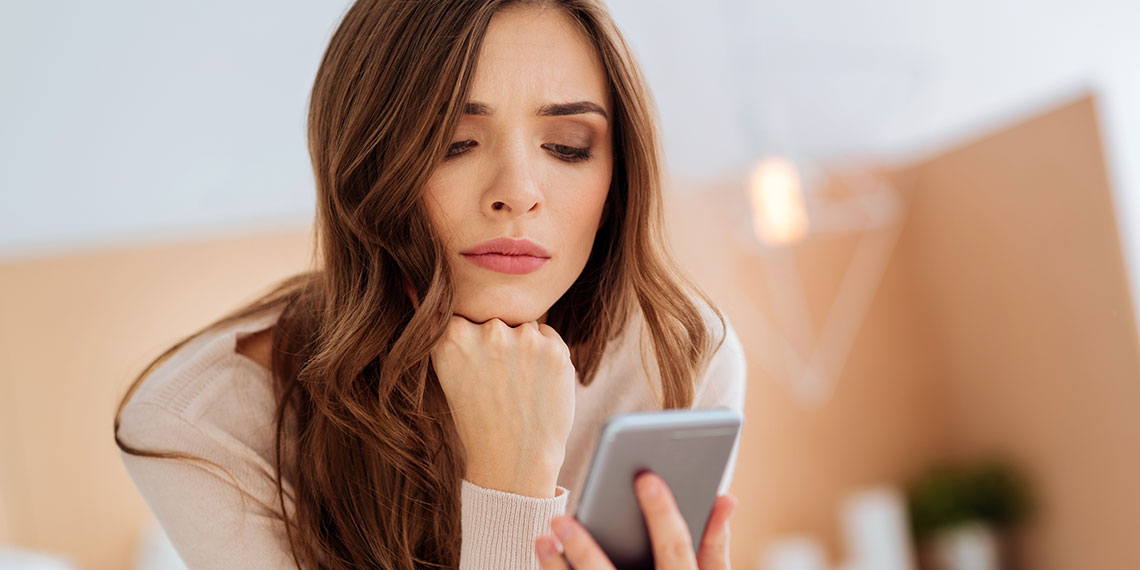 All of my friends who’ve been dating their significant other for five or more years always say to me, “Being a twentysomething single girl in New York must be so fun!” I’m sorry, but why does everyone think that being single in New York is like being in Sex and the City, running around on a writer’s salary in my brand new Manolos trying not to spill my $17 cosmopolitan? I have more in common with Tony Soprano than I do with Carrie Bradshaw. The only SATC episode that my single New York life is kind of similar to is that one where Carrie makes dinner plans with her infamous f*ck buddy, full-well knowing she’ll never speak to him again. In other words, ghosting. This, married friends, is what being single is nowadays.

If you haven’t already guessed, I’m a big believer in breaking up with somebody using your words, but honestly, sometimes these clowns don’t even deserve that. For instance, a few years ago my boyfriend of two years (repeat, two years) broke up with me via Facebook Messenger. WHAT?! I was so mad that I didn’t even respond and we literally just never spoke again. Two years! Anyway, technically he broke up with me, but I guess you could say I ghosted him and, guess what, I didn’t feel bad about it. So, even though conventional wisdom says ghosting is always bad, there are plenty of times where it’s actually okay to just stop responding to their texts, and doing so doesn’t make you the asshole. Let’s talk about times it’s okay to ghost someone.

I mean, this should go without saying, but if you’re ever in a situation that makes you feel either unsafe or uncomfortable (the two usually go hand in hand), you can safely fade away into the night guilt-free. Maybe you gave him your number off a dating app and now he won’t stop texting you sexually explicit things, or you went on a date with him and he kept aggressively trying to get you to come back to his place even though you gently tried to turn him down a few times, or he is calling you nonstop even though he knows you are working. Whatever the case may be, if this is a person whose behavior is ringing alarm bells, you do not owe them a response. And, in my opinion, the types of people who repeatedly stomp all over your boundaries are the same kind of people who take any response, even an explicit “I’m not interested”, as encouragement to continue. In cases like these, the best thing to say is often nothing.

2. They Only Reach Out After 2am

This should also be obvious, but in case it’s not, keep reading. You should not feel obligated to respond to a late night “u up?” text unless you’re down to meet up. If you aren’t, just don’t respond. I feel like people, myself included, think it’s such bad form to just ignore a text, but if that text is a booty call at 2am or later, do not feel guilty for not answering it. The dudes sending you those texts aren’t looking for witty banter, they’re looking for a yes or no. They don’t care about you not courteously texting back to let them know that, while you are in fact up, you’re quite tired and are going to have to politely decline. None of that sh*t is necessary. So if a guy you aren’t into texts you after you’re already in bed, feel free to not respond without any pangs of guilt.

3. They Ghosted You First

You went on a few dates with someone who, out of nowhere, disappeared from your life…like a ghost. Ya hate to see it. You may text him a few days later to check in or put a dinner on the calendar, but he doesn’t respond so you kind of give up and move on. Then, like a Dementor coming down from Azkaban, he hits you up. He was 110% seeing another girl when he was also seeing you, but then he decided he wanted to focus on her, so he ghosts you. Then things with her don’t work out so he comes crawling back to you as if five months of silence didn’t just go by. Yeaaaaah, no.

If this sounds familiar, please ghost this arrogant prick. Does he think he’s being subtle when he pulls sh*t like this? Are we expected to just respond as if we didn’t just fully get ignored for half a year? Please, someone tell me. You have permission from everyone to ignore him.

4. They’re In A Monogamous Relationship

I know this sounds beyond f*cked up, but I have been propositioned by not one, but two men in serious relationships within the past six months *throws up*. They both texted me later in the evening to meet up for a drink, which I didn’t think was a big issue until they said, “don’t tell anyone.” And then I obviously told all of my friends. I don’t owe them discretion when they are clearly asswipes who don’t deserve their girlfriends. Anyway, after I realized I was being hit on, I just stopped answering their texts. Again, I don’t give a sh*t about ghosting them—if anything, I feel gross for being the object of their attempted infidelity, even though it wasn’t my fault. If gross guys in relationships prove that they are, in fact, skeazy, it definitely qualifies as one of those times it’s okay to ghost their ass.