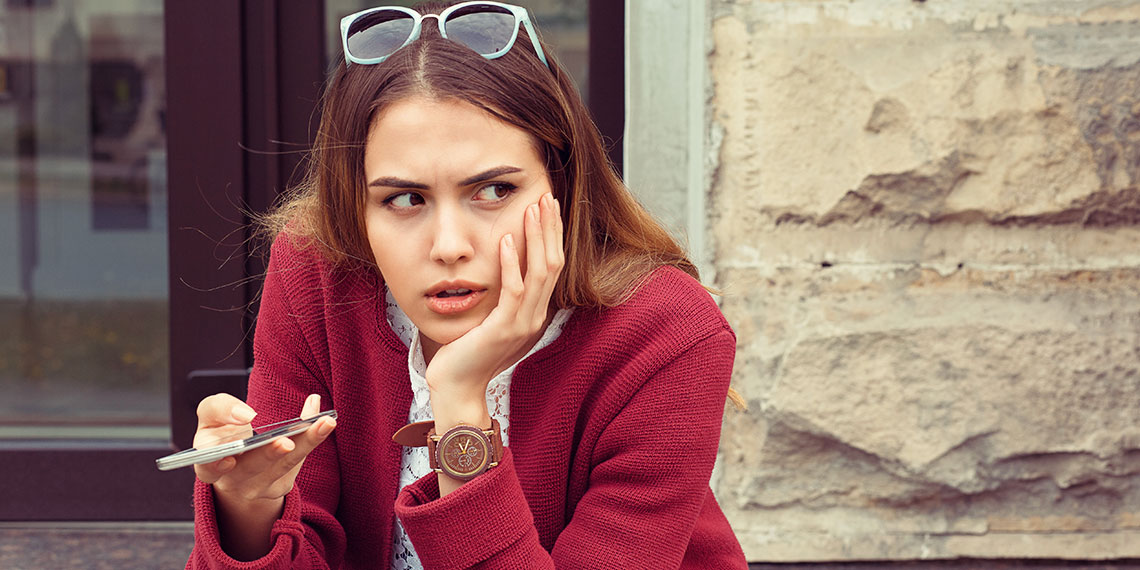 If you’ve ever been ghosted after hooking up with someone, then you know just how f*cked up it can feel. This happened to me for the first time (not a brag) not that long ago, and my ego was literally shattered, especially because I tripped over his foot and headbutted him when I went to kiss him goodbye. RIP. If you’re anything like me, you’re probably going to blame yourself and overthink about WTF could’ve happened—and that’s totally normal. Or you might blame the person who ghosted you for being a player. Chances are it’s not your fault, but FWIW, it’s not always because they’re a jerk either. That’s obviously a strong possibility, but there are actually a million other reasons why someone might disappear after you hook up with them that don’t automatically mean they’re a terrible person.

We’re definitely not defending their actions, because ghosting is a p*ssy move and you should be able to communicate your feelings with someone you had no problem banging. Like, it’s 2020. Grow up. But here are five scenarios why people might ghost after a hookup, aside from just being an asshole:

“People typically ghost because they aren’t able to offer the level of commitment they think they’re expected to give, whether that’s communication over text, another hookup, or a relationship,” explains Hannah Orenstein, senior dating editor at Elite Daily, author of Playing with Matches and Love at First Like, and former matchmaker. She believes this could stem from a bunch of reasons, like not being ready to date, anxiety about dating, or a lack of confidence in their communication skills. As scary as it can be, she encourages communicating honestly about how you’re feeling. “It’s normal to feel anxious about telling someone that you’d like to hear from them more often or that you weren’t sure where you stood after your last hookup. But avoiding these conversations can be nerve-wracking, too,” she adds.

Personally? I prefer to die in silence until they naturally come crawling back with a “hey stranger” text at 11pm six months later. “You deserve relationships that are based in thoughtful consideration and clear communication. Sometimes, the first step to getting there is to initiate the tough conversation.” Wait, on second thought, I like this approach better. No more wondering what if. In 2020, we’re accusing our ghosts even when we can’t see them. “HEY STRANGER…”

Tim is an admitted serial ghoster who spoke to me about his past habits blames “typical boy sh*t” (like, actual issues from childhood) as the reason why he ghosted so many people. “When I lost my virginity, I felt like I wasn’t a ‘man’ because I didn’t bang the girl for over an hour like the dudes I watched on late night TV porn as a kid (which I assumed to be 100% real in my young naïveté), and that made me feel anxious.” From that point on until his late 20s, he’d immediately feel an overwhelming sense of guilt every single time he had sex. “I’d subconsciously go back to the moment after my first time. It would make me DESPISE the women I’d be with, and I’d be so uncomfortable that I wouldn’t want to speak to or hear from them again. None of that is an excuse, and I was an ignorant dickhead, but that’s why.” Cheers to brutal honesty. Kudos to you, Tim.

Best part of his story? “The first night after I had sex with a woman who was my friend for years, I got up and went outside because those anxious feelings toward myself still existed. She realized it and let it go. The next night, she told me she needed me to stay with her because she was scared of the storm. My need to be protective overtook any past BS and alleviated the stress. She spent months doing this until me staying around her after sex became normal and we were able to really unpack the reasoning behind how I was.” AND NOW THEY’RE MARRIED! Maybe pretending to be scared of the weather every single night for months is the key to a ghost’s heart. Imma try this out.

3. Maybe You Got Too Clingy

Ever think that maybe you started sending 10 texts too many or called too many times after you guys hooked up? Because that could totally scare some people off, especially if all they wanted was something casual. “This chick kept barraging me, asking me to FaceTime her when I was busy getting drunk,” Jimmy, 27 from NY, recalls. “Then she started sending me pictures of herself holding a baby that wasn’t even hers when I was hungover the next day.” YIKES. That’s actually terrifying. Nothing screams “ look at how wifey material I am!” like sending selfies holding random babies to the person you just had sex with yesterday. Hard pass.

4. You Were Rude Or Inconsiderate

Sorry to break this to you, but maybe you weren’t the most thoughtful host? Take it from Mitchell, who literally blocked someone on Bumble and immediately unfollowed him on all social media on the elevator down from a hookup. “I brought over a bottle of wine (sauv blanc that he likes and I didn’t). After we hooked up and got dressed, I was like ‘how about some more wine or something?’ and he said ‘I have some work to do so maybe another time’ and KEPT THE F*CKING WINE. I was in such a state of shock I had to ghost him. There was no other option.” TBH, totally understandable. That guy definitely deserved to be blocked and ghosted and maybe even reported on the dating app for inappropriate conduct. If you’re hooking up with someone, the least you can do is respect them, their time, and their effort… or offer them to take back the wine they bought you took three sips of?

“While it’s certainly possible to be ghosted by someone who didn’t enjoy the experience, I wouldn’t necessarily assume that’s always the reason,” says Orenstein. But… sometimes it is. “When I finally hooked up with my secret crush for months, his dick was SO small and he lasted about four pumps,” Kayla, 28, remembers. “After, he gave me his number about 7 times and told me to hit him up, but I really just pretended to put it in my phone while calling an Uber at 6am.” SAVAGE. On another note, Nick, 31, ghosted a chick he met off Tinder after they went on a proper date. “The next time we hung out, she invited me over to her parents’ house (I could hear her parents talking the whole time). She made me watch a sh*tty romance movie then gave me a handjob while staring in my eyes the whole time. I was so freaked out. I was like, 26 years old and the girl gave me a handy and never took her eyes off me. So awkward.” LOL. 1) do people really give handjobs anymore? and 2) she probably read too many sex tip articles that suggested making more eye contact. Poor sis. Fatal mistake in this case.

You’re over debating what happened and you want the truth. Do you send them a text seeking closure? Or let it go and wonder WTF happened for the rest of forever? “As personal as it can feel, getting ghosted rarely has anything to do with you and everything to do with them. While there’s nothing wrong with reaching out to seek closure or understand why someone ghosted, consider that this person may not be able to provide you with a satisfactory answer,” says Orenstein. That said, if you’re dead set on reaching out to them, she recommends sending a simple message that asks for clarity surrounding the situation. But before you decide to reach out, wait until it’s clear that you’ve actually been ghosted, “meaning they ignored a few texts in a row or they stood you up on a date.”

OK, But I Still Feel Like Sh*t. Now What?

“There’s no shame in feeling upset, angry, or rejected by this — getting ghosted, especially after being physically and/or emotionally intimate with someone, is a jarring, blindsiding experience,” says Orenstein. But in the end, do you really want to date or hook up with a person who can’t maturely and respectfully communicate with you? “If you’re the kind of person who finds ghosting to be frustrating or rude, this person likely wouldn’t be a compatible match for you, anyway,” reminds Orenstein.

No matter why they did what they did (aka disappeared), all you can do is take care of yourself. She suggests letting yourself feel your feelings, journaling, going to therapy, practicing self-care, engaging in fun distractions with friends/family/hobbies, or whatever else works for you. “And when you’re ready, putting yourself back out in the dating world can remind you that there are so many exciting possibilities out there in the world for you, including good people who won’t ghost you.” Cute, empowering, solid advice. Love it. Where TF are these “good people,” though? Asking for myself. SOS.