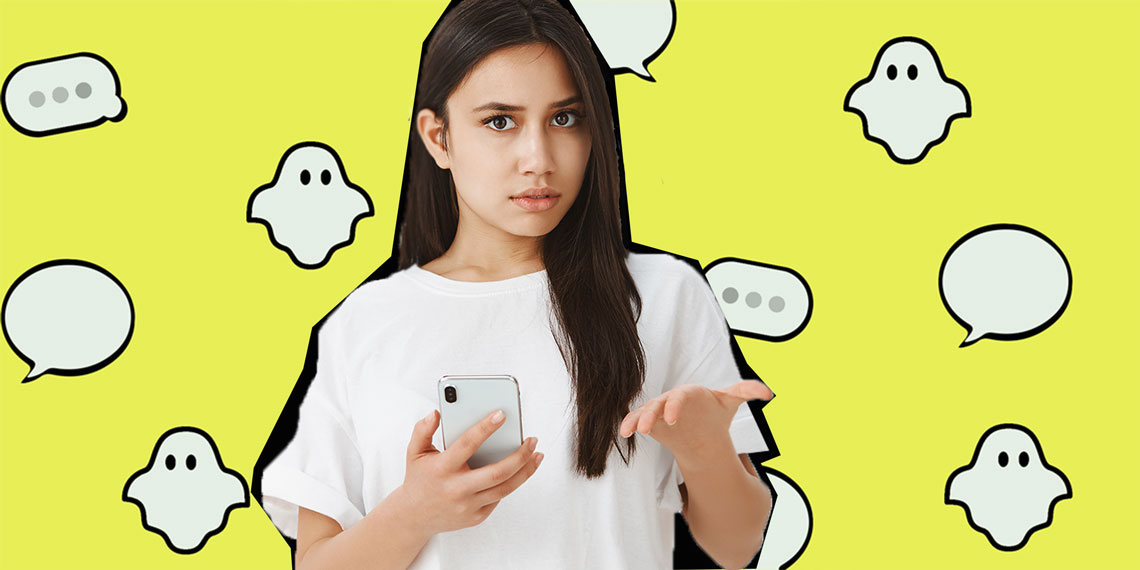 It’s an odd feeling, when a person who ghosted you tries to creep back into your life through social media. Maybe it’s a Facebook friend request, or a ” just added you on Snapchat!” or a mysterious “like” on your latest bikini pic. Your heartbeat picks up speed. You’re suddenly very aware of the precise volume of sweat your armpits are producing. “Could this be it?” you think. “It” being the moment you’ve been fantasizing about for months. The moment the person who f*cked you over—romantically speaking—finally comes slinking back, giving you the coveted opportunity to tell them off. You’ve rehearsed this exact scene in the shower, run through different outcomes before drifting off to sleep at night, smiled to yourself on the subway when your fictional self tells that person exactly what’s on your mind.

Mine came in the form of a Facebook request from a guy I had been seeing for a few months before he promptly went Casper. Actually, Casper is friendly. This guy was frigid silence and indifference. It stung. We’d been going on dates for, probably, a handful of weeks—spring into summer. Then, slowly, almost imperceptibly, I could feel a bit of distance. I tried to put it out of my mind—”I’m probably overreacting, he’s still responding to my texts”, “Maybe he just thinks I’m not interested and I need to put in more effort”—but eventually the plans were cancelled, the apologies were infrequent, and eventually, communication stopped altogether. And then, close to a year later, a Facebook friend request popped up. I accepted, standing at the ready for an apology, or even an explanation. None came. Then came the Instagram follow. Again, I braced myself for the onslaught of DMs. No such DM ever slid through. But every so often, when I’d check who watched my Instagram stories, I’d see a familiar name. Just watching. Lurking. Not interacting, but viewing passively from the sidelines.

It’s a tale as old as time, song as old as rhyme: guy who ghosts you but watches all your Insta stories. Okay, so it’s not exactly a tale as old as time—more like, tale as old as November 2016, when Instagram stories were introduced. But ever since I casually mentioned it in an article about a week ago, I feel like this phenomenon has been all over the internet. On the one hand, I’m glad I’m not the only victim of this baffling behavior. So I gathered up a few guys I know and asked them why guys ghost but watch your Instagram stories. Some names have been changed to protect the guilty, but I left their responses as-is, in their full glory.

Alex, 26
“Because they want to see if they made a mistake ghosting you or if they can dip back in for a quick smash.”

Jared Freid, 33
“I think we need to separate the ghosting from the story watching. We all ghost because we are afraid of telling a perfectly good person that we want to keep searching. ‘I will f*ck you but I think I could find someone that’s better for the long term’ is very difficult to tell someone you just saw naked. But most people don’t want to be mean, so the easy thing to do is to just drift away like a ghost.

Now, why separate the stories? Well, I just ‘watched’ like 10 stories and it was pretty mindless. At one point I put the phone down and it kept ‘watching.’ I think we’re noticing the watchers more than who we are watching. And I don’t mean ‘why guys ghost but watch your Instagram stories’ is a bad question, because the ‘guy leaves but watches my story forever’ conversation is being had at brunch tables across this great nation.

But, to me, the question should be, ‘Why are we still following the people we ghost?’ The answer to that, is that we want to make sure we weren’t wrong. We dispose of people so quickly. Meeting someone on an app, going on a date or two, hooking up, then saying ‘I’m going to keep looking for better’ is too quick an interview process, but the alternative is closing off and saying that ‘perfect for us’ person that may not exist. So the ghoster keeps following, watching, and sometimes liking to keep any eye on the stock he didn’t invest in. It’s creepy and awful and human all at once. If you don’t think the person who said ‘Bitcoin is stupid’ doesn’t check how Bitcoin is doing, then you’re nuts. And this is honestly the same thing.”

Jake, 29
“Most of the time—accidental. Since your phone knows EVERYTHING, it puts the people you want to see most and least in line for Instagram stories. Also an attempt to be relevant or in the head of women you’ve decided to stop talking to. Mind games.”

Dan, 26
“Because maybe you’re posting thot pics in your story. Gotta commit to texting, don’t have to commit to thot pics. Can’t know until you look at it.”

Stephen McGee, 28
“When I have ghosted someone it was probably because I knew that, for whatever reason, I would definitely ruin the relationship at the time but didn’t want to completely destroy the potential. I’m sure there are a few guys who roll there eyes every time they see me lurking watching their stories or whatever… but it’s just me trying to break the ice to come back. Cut a guy a break if he is lurking—he *might* have good intentions. Probably not, though, so don’t @ me.

On the other hand, my last boyfriend broke up with me after three months. Then we reconnected after a month or so for like two weeks and then he straight-up disappeared on me too. Not a word. I blocked him on Instagram like two weeks after he ghosted and have been so good and not looked at his profile through one of my three fake accounts or contacted him in any way (although obviously I’ve hung out with his friends and made them post us on Instagram). It’s not a solution to stop people from ghosting, but it will definitely make you feel better if you can flip their ghost on them and haunt their ass for a while.”

As for the guy who ghosted me but then added me on every form of social media I have? He declined to comment for this article.