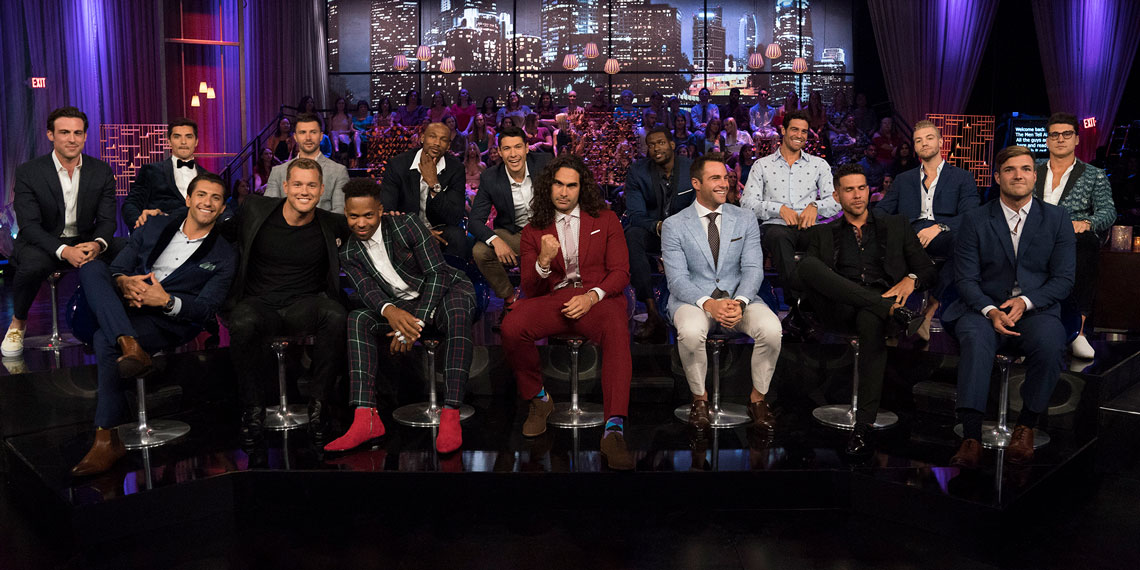 The Best ‘Bachelorette’ Recap You’ll Ever Read: The Men Tell All

This week on The Bachelorette, ABC is gifting us with The Men Tell All, and I for one cannot wait to watch Jason and Colton try and out-cry each other for the next two hours of my life. Kidding! I think I’d rather bathe in bleach. But, alas, we can’t all get what we want in this life. That said, you betches are in for a real treat because this week I’m watching The Bachelorette with fan faves Jordan Kimball and John Graham from Becca’s season AND Derek Peth. And don’t you worry—just because they’re sitting in the same room as me does not mean I’m not going to quietly rip them to shreds for the next 120 minutes. So, shall we get started?

Chris Harrison starts off the night by asking the hard questions: Will Becca find love?  If by “love” he means a man whose mother still rocks him to sleep at night or a homophobic racist, then, yes, I’m sure she will find love. Mazel tov!

Chris starts bringing out the men from Becca’s season, and it’s like going through my texts after a v aggressive happy hour—I literally have no idea what’s happening on my screen. I can’t wait for Chris Harrison to try and spin drama out of these nothing burger humans.

Oh STFU Jason. He’s like “it’s so stressful being here you just black out sometimes.” I mean, is this something I tell my boss when she confronts me about acting too “inappropriate” at our company happy hour? Yes. But that’s neither here nor there.

This is rich. Connor asks Chris how he can just “lose his mind” on the show as he wears a paisley blazer and beige slip ons and thinks nothing of it. K. We all know those glasses aren’t prescription either, Connor! (Also he literally got mad over a picture and threw it into a pool, lest we forget.)

They’re all ganging up on Jean-Blanc and I genuinely forgot that he was even on this show. Remember when he was the worst guy there because he was creepy and always trying to pimp out his cologne on Becca? Even though there was a literal sex offender who stayed several episodes longer? *sighs* Simpler times.

WHY DO THESE MEN KEEP USING THE WORD DISINGENUOUS? Like, they must have said it 10 times at this point. They keep using this word and I do not think it means what they think it means…

Interesting. I didn’t think Colton and Jordan would get into it tonight, but then again, one of them is willing to sell his virginity to ABC’s highest bidder and the other is Jordan. So, it makes sense.

COLTON: I’m not saying you weren’t a sweetheart, I’m just saying you’re not gonna get married in golden underwear.

First of all, Colton, those are fighting words. Second of all, they were all just in Vegas! You KNOW people get married in golden underwear there, like, all the time.

Ah, yes. The Chicken chimes in. I was waiting for him to grasp for those three more seconds of fame. Jordan is like, “the worst thing you can ever say about a woman is that you’re settling, so I never said that. I just heavily implied that boys with asses like mine do not talk to girls with faces like hers.”

Sidenote: is anyone else noticing Wills’ provocative footwear rn? I feel like he got those booties from the Nordstrom anniversary sale and I’ve never loved him more. YOU DO YOU, BOO BOO.

Wait, who is this guy wearing leggings from the Macy’s junior section trying to attack Jordan rn?

ME: Jordan, have you ever been in a fight in your entire life though?
JORDAN: Yes, I have. Once. When I was 12 years old.

Chris Harrison calls Jordan to the hot seat and we get to see a look back at all  his best moments. Honestly, thank god he made it as far as he did because otherwise I would have set fire to ABC studios long ago.

JORDAN:  I’m sorry you didn’t like me but I won’t apologize for being confident and my wholly authentic self.
ALSO JORDAN:

Tbh it’s one of the best motivational speeches I’ve heard in a while.

Chris Harrison asks the men why they think Jordan is so annoying and David, the man who lists “chicken” in his career bio, is like “well he wasn’t very serious about the whole process.” K.

JOE THE GROCER. IS. HERE. OMG. I CAN’T FUCKING BREATHE.

CHRIS HARRISON: How was all 5 minutes of your time on The Bachelorette?
JOE: Pretty bad.
ME: You’re too pure for this earth.

JOE: *breathes*
ALL OF BACHELOR NATION: I would die for you.

Okay, what are these tweets Chris is pulling up about Grocery Joe? They each have, like, two likes. Are you really telling me that this is the best that underpaid ABC intern could do?

DEREK: *looks at Joe* He’s so cute, like a baby bird. I want to feed him with a dropper.

LOL. I love that Chris Harrison can’t get any personal details out of Joe. It makes me like him so much more. He’s like “Idk what to say, there’s cameras around and I don’t even know you.”

Okay, Joe, you went all the way to Paradise and all you can tell us is “it’s complicated” with your relationship status? Are you kidding me ? I need to know if he finds love in Paradise or not!

They call Wills into the hot seat, and I don’t know if I can watch his montage without breaking down. It’s like he’s getting dumped all over again. Oh my god he’s crying!!!

Chris is like “I feel like you connected on a different level with Becca than she did with the rest of the men.” Interesting choice of words, Chris. If by “different” he means on a level deeper than “hot and contractually obligated to show me affection for 6 weeks” then, yes, I suppose their relationship was a bit different.

God, Wills is such a goddamn gentleman. Even the way he’s talking about Becca rn post-breakup is sooo stand-up.

WILLS: *mumbles*
ME AND ALL OF AMERICA:

Colton’s next to sit in the hot seat, and I’m not sure I can sit through another tearful admission about his virginity. Also, WHAT is that bedazzled blazer he’s wearing rn? It’s heinous. Like, is Cary Fetman styling him too??

HAHA Chris keeps asking what his relationship with Tia was and he’s like “well I wouldn’t call it a ‘relationship.’’ What would you call it, Colton? Just the tip? And they say chivalry is dead, ladies!

Okay, I can’t with Colton right now and all his fake tears. He just  admitted on national television that he’s never seen a woman’s vagina and I’m not buying it for one effing second. You were a PRO FOOTBALL PLAYER and not one girl sent you a nude DM? Please. He’s trying sooo hard to recreate the Sean Lowe Bachelor magic and it’s painful to watch.

Last but not least, Jason takes the hot seat. Why do I have a feeling this is going to be less about him and Becca and more about him using this 10-15 minute window to campaign to be the next Bachelor?

JASON: You guys are so sweet—it’s been a wild ride!
ME:

Chris is like “what is it about what you just saw on this screen that brought you to tears more than when Becca actually dumped you?” Well, I’m pretty sure that’s from the onions production were furiously cutting in front of his face backstage prior to this taping, but you tell your truth, J!

They bring Becca out and she is doing an incredibly good job of reminding every single one of these men why they’re better off. Becca, you’re supposed to show up to this public roasting of all 30 of your exes looking so good that they wish they were dead!

I mean, what are those bedazzled half hoops she’s wearing? They say the bigger the hoop, the bigger the hoe, but those hoops are saying she might let you get to second base but only with the lights turned off.

Omg WHY is Jason talking to Becca like he’s going through an employee review?

JASON: Moving forward, what can I do to improve so that I can better myself for my next relationship?

I see right f*cking through you, Jason.

Chris asks Becca about the Tia situation and she’s like, “you know I’m still friends with her because I’m contractually obligated to be.” Ah, the true bonds of friendship. I bet she wants Tia to find love about as much as I want my ex to not die in a fiery car crash, but okay.

How many times are Chris Harrison and Becca going to say “this group of guys was so great” and then pointedly not discuss Lincoln?

Chris Harrison asks the men if they  feel personally victimized by Becca AND JEAN-BLANC FUCKING RAISES HIS HAND. Stop. This is so uncomfortable. I’m dying.

^^an actual reenactment of what just happened on my screen

Oh of COURSE he’s using this five extra seconds of screen time to pimp out another cologne. Take your cologne and your broken dreams elsewhere, Jean!

Wait what is this apology? Chris doesn’t speak the entire  episode and then comes out at the end with an elaborate apology sung by a church choir? But why?

Well that wraps up another thrilling episode from this season! So in the end, the men did not tell all. They told almost nothing, and pretended like they were going to fight each other, as if we believed a man in suit capris would ever punch a man with perfectly coiffed hair. And the countdown to the finale begins!