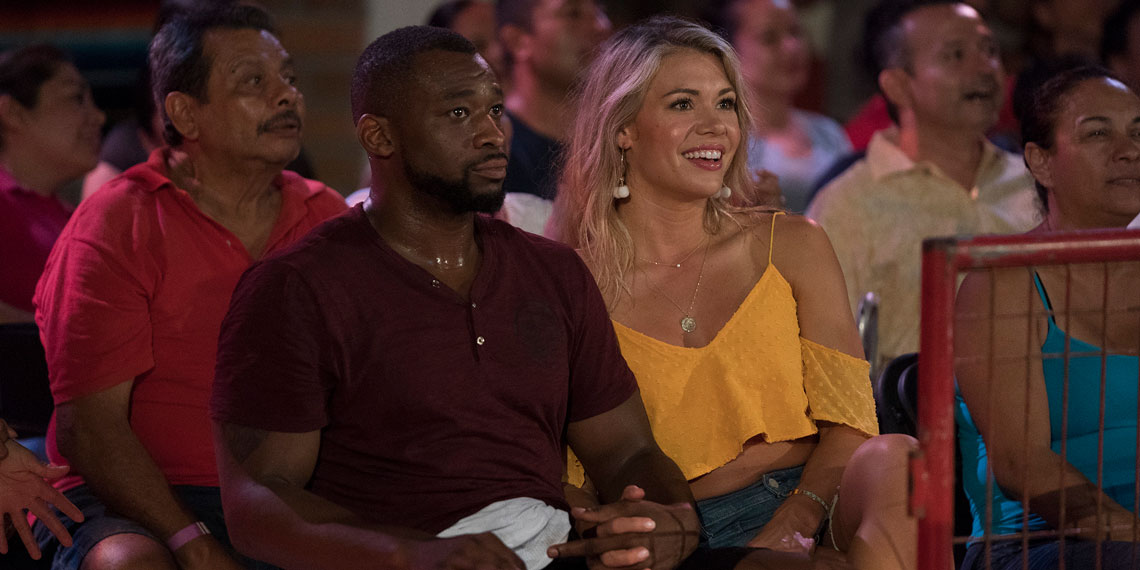 Well, fam, here we are again. Another week come and gone where all I’ve done is worry far too much about the emotional stability of people who make their living off of FabFitFun boxes. That’s right, people, I’m talking about Bachelor in Paradise. When last we left off, ABC’s less hot version of Gaston was summoning the franchise’s biggest beach trash to verbally take down a 26-year-old virgin. Honestly, I can’t imagine they have that hard of the job. So, shall we continue where we left off?

I can’t believe Chris is trying to lecture Colton on appropriate behavior when I can see far too much of his milky thighs in those Chubbys.

CHRIS: You can’t just have your cake and eat it to.
COLTON: Yes, I can. This is Paradise.
CHRIS:

Well, well, well. Color me shocked that a guy who willingly subscribed to getting blackout on a beach for seven weeks wants to have his cake and eat it too. It’s like production invited living, breathing men to Mexico or something.

Elsewhere, Tia is word vomiting to anyone who will listen about their date on a yacht. She’s like “I hope I’ve made it clear that I’m here for him.” Yep. Loud and f*cking clear, honey.

MY GOD I’m so sick of this Tia/Colton storyline already. Like, Tia, what are you even losing your dignity over? Hmm? You know his virgin ass probably lasts three seconds in bed and considers dry humping with your clothes on foreplay. Tia, we did not march for this sh*t!!

Kenny gets the next date card, and he looks just as surprised as I am that the producers might actually throw him a bone.

WHAT. He chooses Krystal for the date? Am I in an alternate reality? WHAT. IS. HAPPENING.

KENNY: I’m looking for a good girl. Someone to be a role model for my daughter.
KRYSTAL:

Me too, girl. I feel like I’m taking crazy pills!!

Lol did Annaliese just say the words “serious” and “want to be engaged after three weeks” in the same sentence? Does she know the meaning of the word serious or…?

Jordan and Annaliese start making out after a single glass of champagne and she’s already talking like this will lead to a proposal at the end of this. She’s like “we’re a couple now and it’s crazy” and it’s, like, no, honey, you are not a couple. At best you might make it into Jordan’s Instagram story one time and that’s only if his producer holds him at gunpoint to do so. That’s your best-case scenario, dear.

Moving on to Kenny and Krystal’s date. They go to a Mexican wrestling match because apparently Kenny only gets one defining trait per franchise. He’s a wrestler. Got it.

OH SHIT. Kenny just whips his shirt off and starts fighting to defend Krystal’s honor. Never mind that Krystal has about as much honor as a can of Four Loko.

Wait, so they went to an underground fight club and now they get to sit on a bench in an alley and drink out of Solo cups. When do they get murdered? Soon, I hope!

KRYSTAL: Kenny has been through adversity same as me.

GOING ON THE BACHELOR IS NOT ADVERSITY, KRYSTAL. Someone please get this girl a dictionary. You keep using that word, but I do not think it means what you think it means.

Andddd they’re kissing. As if this date could get any more bizarre.

Meanwhile, back at the beach, Kevin wastes zero time in getting over Krystal. He’s like “Astrid is a nice distraction because have you seen her boobs?” Wow. I hope these two crazy kids make it!

FOR THE LOVE OF GOD, TIA, PLEASE STOP TALKING ABOUT COLTON. She’s like, “I’m not gonna sit here and ooh and ahh but that’s exactly what I’m gonna do.”

ME: Say Colton one more time.
TIA: Colton.
ME:

Here’s the thing: it feels like Colton is not into Tia, and never was, and he’s just trying to have a fun time in Mexico after getting his ass dumped on national television. Like, the more Tia talks about it the situation the more I’m convinced they should bring Taylor in to lecture her about emotional intelligence. Please, ABC, it’s all I ask of you.

Cut to Colton showing off his football “talents” for that rando Angela. I’m putting talents in quotes here because I’m sure his coaches would be embarrassed to watch the display he’s putting on rn.

^^Actual footage of Colton and Angela on the beach rn

F*cking finally. We’ve arrived at the first rose ceremony, and tonight it’s girls’ choice. I feel like Wills is in the running with no one and it’s making me so ill rn. He better last longer than one effing night or there will be to hell to pay. Hell. To. Pay.

Chris Harrison shows up and gives the most amazing pep talk I’ve ever heard. He’s like “are you ready to fight for your life and really fake some connections tonight, men?” Are they ever, Chris.

NICK: This is more stressful than my real job.

This is Bachelor in Paradise, are you kidding me with this, Nick? Your literal only job is to be just likable enough that some girl gives you a pity rose to keep you around another week. Surely you can muster up some sort of charisma and charm you keep hidden underneath that Vegas DJ facade. AND HOW IS THAT MORE STRESSFUL THAN ANSWERING SUSAN IN ACCOUNTING’S EMAILS?

Oh, Joe. You sweet, innocent soul. Kendall, if you don’t give him your rose I will skin you alive and mount you on my wall.

Tia pulls Colton aside, and her plan of action for their talk sounds like the ramblings of a madwoman. She’s like “I’m just going to let him know that I’m going to be his girlfriend and I don’t care if he says no because that’s what the producers promised me.”

Okay, he could not make it more clear that he’s just not into her. This is so sad to watch. Tia, just let this dream die!

OMG. Is Tia trying to threaten Colton into giving her rose? She’s like “If you want to stay here on this beach then you need to be my boyfriend, got it?” Yooo this girl is batsh*t. I can’t.

And there’s Chris waiting in the wings. He says some vaguely nice things about her and Tia all but weeps in relief that at least one man on this island wants to bang her.

A girl can dream.

Someone just said “have his cake and eat it too” and we’re now at the third time in 20 minutes. I swear it’s like these people get a phrase a day calendar and then try and pepper it in everyday conversation as much as they can.

Moving on to the actual rose ceremony. I truly don’t know who’s staying and who’s going. I’m low-key sweating on my couch with anticipation.

The rose ceremony goes as such:

I can’t f*cking believe Wills is going home but Venmo John gets to stay another week. How DARE ABC bring him to Paradise only to sacrifice him after week one so the Tia/Colton storyline can continue to live on. I’m so distraught. ABC, please just make him the Bachelor and be done with it.

Cut to the morning after the rose ceremony. Tia’s voice over is like “I’m feeling so good and so confident.”

ALSO TIA IN REAL TIME: Chris, I’m going to be insecure and you’re going to have to deal with it.

Chris Harrison says there’s gonna be some surprise guests throughout the season. First up, Becca! Lol the look on Colton’s face rn is giving me life. God, the producers must hate him.

PRODUCERS: How does Becca showing up make you feel?
COLTON: I’m feeling a little personally victimized for sure.

Wow. Becca’s outfit isn’t actually that offensive. This is crazy. Becca’s like “I’m here to give you advice the same way some of y’all gave me advice.” I really hope that by “advice” she means she’s going to guilt-manipulate Tia out of a man.

Andddd here go the water works. While Tia and Becca assassinate his character over mimosas, Colton is crying alone on the bottom bunk sucking his thumb. This is the side you need to show, Tia, boy!

Oh sh*tttt. Becca’s off to confront Colton and literally nothing can make her feel more secure in her choice of a fiancé than walking in on her ex-boyfriend curled in the fetal position moaning into his pillow.

And on that note, I’m out betches! Can’t wait to watch the rest of Colton’s meltdown tonight.