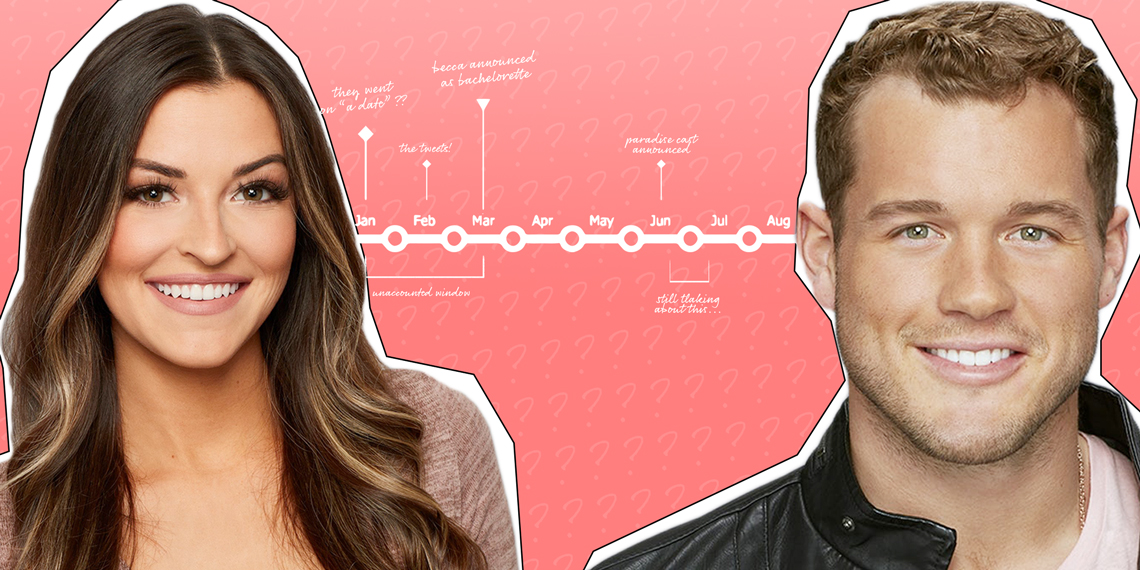 A Timeline Of Tia And Colton’s Relationship & WTF Actually Happened

Friends, we’re nearing the end of this interminable season of The Bachelorette, and finally we have some drama going down. On Monday night’s episode we saw a man that grew up on a farm fail to plant tomatoes, a dude that peaked in high school exploiting his school’s tragedy for his own personal gain, and oh yeah, the return of Tia.

Why was Tia there, you ask? Well, Becca invited all her fame thirsty best friends to come on over and have some girl talk about the four guys she’s dating. As one does. But the second that Becca mentioned her date with Colton, Tia took one of Becca’s many sequined monstrosities and strangled her with it. Or that happened in my dreams, whatever. But we all know Tia was thinking it too. She actually took Becca outside to lay some truth bombs on her.

TBH this whole situation is very puzzling. Tia already mentioned that they hung out briefly before Colton went on The Bachelorette, but supposedly it was just for the weekend? I’ve had food in the back of my fridge longer than that, and I’m not gonna go crying to my friend when I throw it out. This timeline is all very sketchy. Obviously I had to investigate, so I went to the place every serious detective goes when they’re stumped: the internet.

The official story from Tia, courtesy of People, is that she and Colton started talking before Arie’s season even aired. Just a refresher—Arie’s season of The Bachelor premiered on New Year’s Day, also known as the day you drank three Gatorades, ate an entire pizza, and swore you’d never drink again if you could just have sweet relief from this nausea. Colton was supposedly in the casting process for The Bachelorette at the time and started following Tia on Instagram.So Tia DM’d Colton, because I guess she doesn’t care about spoilers when there’s a hot guy who likes dogs and children at her fingertips. They met up in LA for a “date” but then when he found out he had been cast, they cut it off. Interesting. The People article said their entire relationship lasted only a couple of weeks.

This makes sense when you consider that sometimes when people audition for The Bachelor/Bachelorette, they don’t always know whose love they will be competing for. If you’ll recall, Arie only slid into Lauren’s DMs on New Year’s 2018, meaning Arie and Becca broke up mid-January 2018. I think it’s fair to assume that before Arie callously dumped her on camera, Becca was not going to be the Bachelorette (because, hello, she was happily engaged). If we assume that the Bachelor producers move quickly and knew Becca was going to be the Bachelorette at, say, the end of January, their timeline could hold up. However, if you believe that none of the contestants knew who the Bachelorette would be before Becca’s announcement on March 16, 2018, it gets sketchier—that leaves plenty of time for more than one weekend together.

And here’s where it gets sketchy. On The Bachelorette, Colton told Becca that he hung out with Tia before Arie’s season was on TV, which seems to be their official story. BUT THEN why was Colton tweeting about Tia while the season was airing?

Their weekend together had to have happened by this time, right? Also, Tia keeps it real, huh? Is that your pickup line?

So either Colton and Tia’s relationship lasted longer than Colton led Becca to believe, or once he realized Tia wasn’t going to be the Bachelorette (which, again could very well have been after he went through the entire casting process), he tried to create a fake timeline to appear like he didn’t just try and date Tia, thinking she’d be cast as the lead. It’s ALL SHADY. Also, funny how he never tweeted about Becca. I guess he was just not that into her until he knew she held his fate in her hideously tattooed hands.

But that’s only part of the mystery. Because regardless of when their hookup actually happened, WHY is Tia still so obsessed with Colton? Even IF it’s true that they only hung out for one weekend, isn’t that pretty crazy to develop such strong feelings for someone that you force your friend who is actually dating him to back off? If what my “concerned” friends and family tell me is to be believed, yes.

Here’s my actual theory: Tia doesn’t really still have feelings for Colton. This storyline just gives her more time on The Bachelorette, plus she gets to mind f*ck the girl that stole the gig from her. Win-win. This will also be a huge storyline on Bachelor in Paradise, thus giving her even more screen time there. It’s all about the money, people. Anyone who tells you differently is lying.

We may never know what actually happened between Colton and Tia, but the one thing we can be certain of is that they’ll each have their own line of Diff Eyewear in the near future.