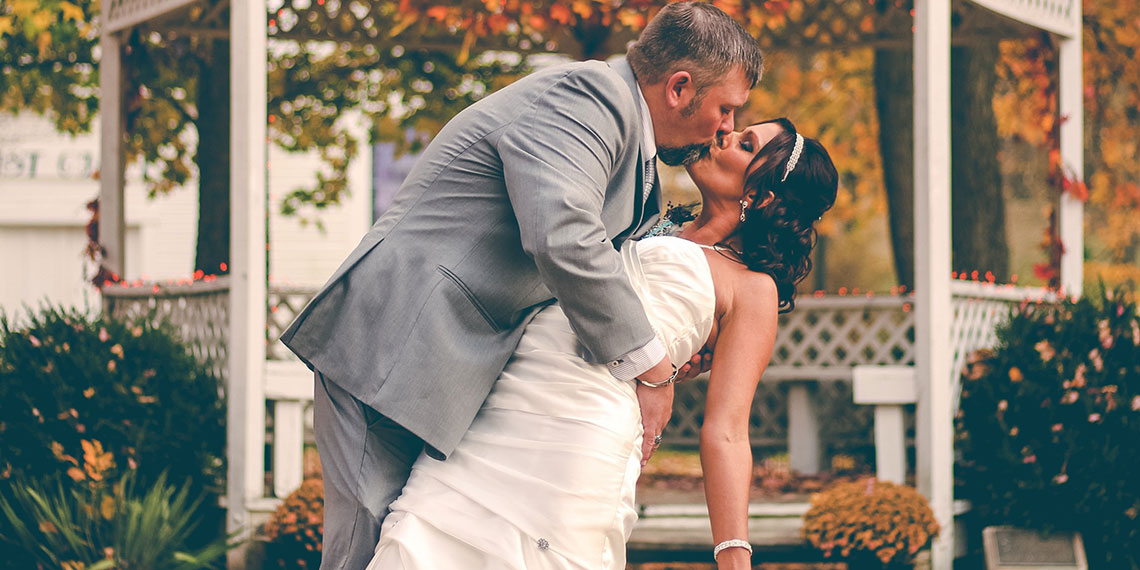 What’s The Most Popular Day To Get Married? It’s Coming Up

If you thought pumpkin spice and candy corn were the only things in the air this October, you thought wrong. According to a study conducted by WeddingWire and The Knot, romance is also in the air, with October 19th clocking in as the most popular wedding day of 2019. Apparently we have moved beyond the days when early summer sun prompted Kate Hudson wannabes to fight over a June 3rd save-the-date. Instead, 34,000 witches brides- or grooms-to-be are vying for fall leaves and crisp air with this mid-October spot. Experts took the opportunity to take a look at popular wedding trends for this popular wedding day, and Betches is here to break them down for you.

First up is the most popular wedding date, October 19th. It seems kind of random, and I mean, it is to the extent that your odds of choosing the same wedding day as someone else are 1 in 365. That said, it makes sense because it’s right at the end of wedding season (which is usually considered to run from May until October), but you don’t run the risk of someone showing up to your wedding in a Halloween costume. Also, depending on where you live, it’s less likely to be 1,000 degrees outside. Jeffra Trumpower, Senior Creative Director at WeddingWire, says, “As fall weddings continue to grow in popularity, we’re seeing more and more couples opt for those September and October wedding dates,” adding, “It’s no surprise to us that 2019’s most popular wedding day of the year falls in mid-October.” So it should also be no surprise that the second most popular wedding date this year was September 21st, with 32,129 couples getting married on that day. Clearly, brides love fall weddings.

can’t help plan the wedding, but when it comes to planning a fantasy draft he’s a professional 🙄 @nicolepellegrin0

So with the most popular wedding day of the year coming up, WeddingWire conducted a number of surveys to understand the couples throwing weddings on that day. They found that a whopping 11,517 couples opted for mixed gender wedding parties (because who says your guy’s best girlfriend shouldn’t be a groomsman?), which makes sense given that in today’s age, more couples are forgoing traditions and looking to put their own spin on things. Along those same lines, WeddingWire reports that 14,905 couples will write and recite their own vows, and 5,759 will incorporate cultural or religious traditions into their wedding ceremonies. (If you’re going to recite your own vows, please make it funny, not corny, and on the brief side because we don’t want to be there for 30 minutes when likely we can’t even hear what you’re saying from the back of the venue.)

Food, not surprisingly, is a big element of weddings. 7,452 couples will be incorporating local decor or cuisine elements from their hometowns or where they met their soon-to-be spouse, in keeping with the theme of having a more personalized wedding. And speaking of food, late night snacks will also be a common wedding feature, with 8,129 couples shelling out much needed cash so their friends and family can get their drunchies. Honestly, thank god for this trend. I am totally cool with wearing a hideous dress if it means I get melted cheese as a consolation prize, and we all need some snacks after spending a night drinking and dancing.

According to users on @theknot and @weddingwire, Saturday, October 19, 2019 is officially the most popular wedding date of the year, which is surprising because I felt like I spent the entire summer attending weddings. Click the link in our bio to read more about what to expect this fall wedding season ✨

But it’s not just about the couple and what they want—I mean, yeah it is, but they also have to consider the guests, so WeddingWire did research to get more insight on the guest experience too. When asked which wedding element they pay most attention to, 77% guests in the survey cited food as number one, followed by music at 55% and then venue at 51%. This tracks with basically every episode of Four Weddings that I’ve seen, as well as the late-night snack trend explained above. Like, if you couldn’t tell, millennials really love food. So let that be a lesson to all of you planning a wedding: a full guest is a happy guest.

For couples worried about getting guests to RSVP, which according to this research you should be, note that most guests cite online RSVPs as easiest (because, duh). But apparently, 29% of guests prefer to mail in their RSVP (because they hate convenience or still haven’t figured out how to turn the Wifi on, I guess) so you probably won’t want to forego traditional RSVPS altogether.

Perhaps most important to consider are the challenges faced by guests. Finding what to wear topped the list of wedding attendee struggles at 44%. That’s fair, considering I agonize for approximately four hours over what I’m wearing on any given day when I know there won’t be a professional photographer in the vicinity.

But actually, the crazy thing is that only 27% of survey responders were most concerned about the cost of attending the wedding, so I am consequently convinced that the people who took this survey are much wealthier than me or any of my friends. Plan all you want, if your friends can’t afford to attend your wedding, an empty reception is guaranteed to be a bad time. This seems to be supported by the research, as 53% of guests who need to fly to a ceremony list flight costs as a major factor in their decision to attend. Whereas local guests list venue as most important in their decision making. To which I have to ask: are people really researching their friends’ wedding venues before deciding whether or not they want to attend? Harsh.

⭐️ GIVEAWAY ⭐️ Because weddings are expensive AF and the clothing that goes along with it is even more expensive, we are giving away 3 free months of @FashionPass for one bride to be and one free month for each of her bridesmaids. If you aren’t getting married, enter anyway & we will treat you and 4 of your girls. Winner will be able to activate the month whenever best suits them (think bachelorette party, bridal shower, etc). Steps 👉🏼 1. Follow @betchesbrides & @fashionpass 2. Like this post 3. Tag your bridal party or 4 friends in the comments Winner will be announced on Wednesday, August 14 at 6pm EST.

Speaking of costs, it may behoove some of you to know that the average cost for guests surveyed was about $430, wedding gift included. That is definitely a bummer for the pretend budget I keep (which really means I just don’t spend more than I have in my checking account without making any real adjustments to my spending habits). I think it’s important to note, however, that costs vary quite a bit depending on how far guests have to travel. For those who were required to purchase a flight for a friend’s nuptials, the average cost was $1,440 (*eye twitch*) compared to guests staying local, who only pay around $180. In other words, if you and your fiancé have family members at opposite ends of the country, you better start picking favorites.

Now that I’ve terrified you with expenses, let’s talk gifts! The most expensive of the trendy gifts registered for on The Knot Registry included an iRobot Roomba (DJ Roomba in the mix), fancy patio furniture from Bed, Bath & Beyond, and a Samsung smart TV. All of which cost around $1,000 each, so if you’ve been currying favor with a rich relative or two in the time leading up to your big day, now’s the time to pull some strings. The most popular of trendy gifts, however, were more modest. A set of wine glasses from Crate and Barrel and serving trays topped this list. Then, of course, there were the ever-increasing-in-popularity cash funds, which 7,769 couples opted for—because asking for money is perfectly acceptable if done correctly. And doing so might be really worth it. As The Knot reports, “to date, October 19 couples have received $692,038 via their cash funds.” Again, that’s divided some 34,000 ways, but still.

And that’s all folks! This upcoming October 19th, late night snacks are all the rage and wedding guests are concerned about expenses (shocker). Turns out the month of October is good for more than pumpkin spice and apple picking after all. My only question is whether the honeymoons are all in the same three destinations we’ve seen every influencer travel to this year, or what?

Using a mix of behavioral and survey data, The Knot and WeddingWire partnered to analyze couples registered on their sites who are getting married in 2019, their wedding registries and guest insights to provide a comprehensive view of the most popular wedding day of 2019. Findings were derived using the WeddingWire 2019 Guest Study, a national survey among roughly 1,000 U.S. adults 22-54 who have attended at least one wedding in the past year, on-site registration data, and insights gathered from couples with registries on The Knot married on October 19, 2019.