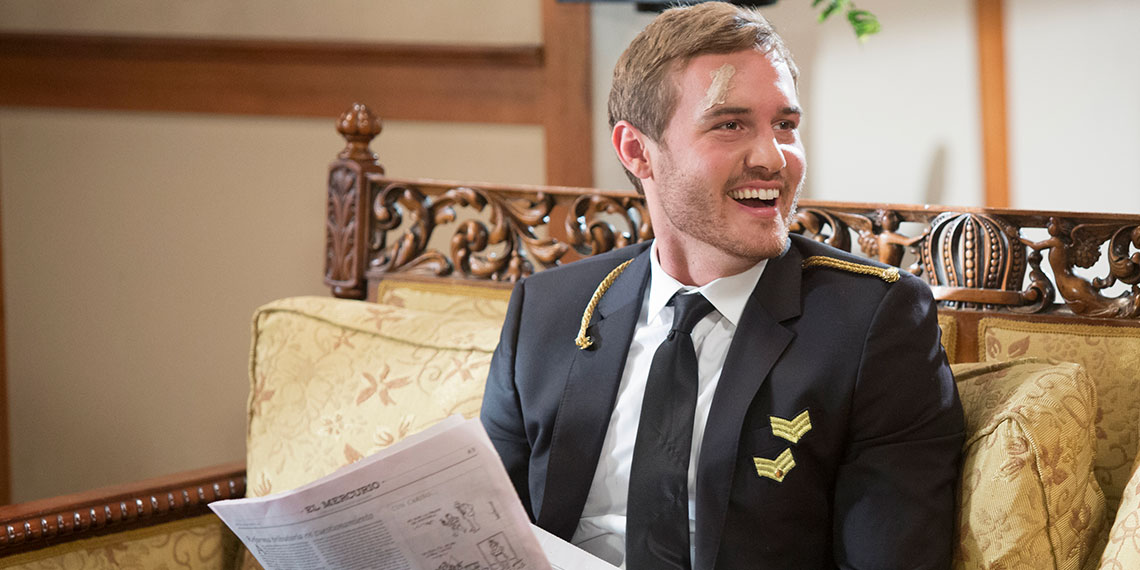 Is This The Worst Season Of ‘The Bachelor’ Yet?

It’s safe to say that few of us had high hopes for this season of The Bachelor. I know I certainly didn’t. With Peter the Pilot in the cockpit, we knew we were in for a nosedive, but it isn’t happening in the way we’d expected. Season 24 (lord help us) has actually been anything but boring, but that’s precisely the problem. For the first time, drama has gone from being an entertaining but ultimately short-lived element of the show, to the foundation upon which our current Bachelor is building just about all of his relationships. As viewers, we’re expected to invest in a lead whose baffling choices leave him with zero credibility, and women with questionable motives. I’ve been wondering for a while now why The Bachelor sucks so much this season, and I think I’ve narrowed it down to a few reasons.

Even Stevie Wonder could see that Peter has an unhealthy fixation on emotionally unstable women. Between glorifying the telenovelas he watched with his grandma as a kid and idolizing a mother who we see in previews sobbing over a mystery woman she barely knows, our Petey never had a chance. It’s no wonder he felt compelled to try and win the heart of Hannah B. who, though endearing, isn’t exactly the poster child for emotional maturity. After rejecting him not once, but twice, she hijacks the first night and a group date and ends up crying in Peter’s lap in a puddle of her own mascara. Instead of immediately recoiling letting her down gently, Peter is apparently aroused and offers to light his season on fire by giving her a spot in the house. We all have our kinks!

Things don’t improve after Hannah B. leaves, however. Soon thereafter we were treated to a multi-episode arc centering around whether or not Hannah Ann stole Kelsey’s champagne. Though Kelsey grew on me over time, her behavior during the whole finasco was nothing short of batsh*t. Normally at the point Champagne-Gate happened, getting wasted, starting petty drama, and not being able to play well with others is grounds for elimination. Not so for our Pedro. Later, when Tammy suggests to Peter that Kelsey is emotionally unstable, Kelsey attempts to set the record straight by… showing up unannounced to Peter’s room and crying. For this, she gets a rose.

Even the Alayah storyline gave us a glimpse into Peter’s psyche. Though we now know that Sydney is an unreliable narrator, we did see that Alayah was rubbing several women in the house the wrong way and shaping up to be this season’s villain. Unless you’re Courtney Robertson, that kind of edit gets you sent home. Instead, Peter tries to bring her back after eliminating her and has even said recently that drama amongst the women “showed that this was working” and “f all the women were just getting along super well, they probably wouldn’t have been super into me.” Putting aside the blatant misogyny inherent in that statement, I’m pretty sure even with all the fighting, they’re still not that into you, buddy. You can go change your forehead bandage now.

Peter Mistakes Composure For A Lack Of Connection

Kelley was arguably a frontrunner early in the season, having banged met Peter before filming began after a chance meeting at a hotel. Peter seemed genuinely excited about her for weeks until their bizarre one-on-one date where he questioned her intentions for reasons that weren’t immediately clear. When Kelley rightly counters that he rewards drama, and on another date has the audacity to suggest that a relationship can be both good and easy, Peter regards her with a suspicion he normally reserves for women over 30.

Even when Peter’s instincts are right, he falls victim to poor judgment. Toward the end of a one-on-one date, Peter seems to pick up on his lack of connection with Hannah Ann, who’s clearly on the show to advance her middling modeling career. He almost sends her home, even going so far as to dramatically walk away from the dinner table. As if sensing that crocodile tears are his Viagra, she goes after him and pushes a few out in a last-ditch effort to secure her FabFitFun sponsorship spot in the final four. She gets the rose and, poof, suddenly all reservations about her seem to disappear.

At this point in the season, the final four should be comprised of four women who, if not actually there for the right reasons, are at least trying to convince us otherwise. This time, with the exception of maybe Madison, we have finalists who would’ve been eliminated weeks ago: Hannah Ann, who’s there to broaden her opportunities and clearly not ready for marriage; Kelsey, the hot mess who overindulged early on and struggles to keep it together; and Victoria F., who hasn’t come close to opening up and being vulnerable, qualities that are practically prerequisites for making it to hometowns. Instead, she’s shady, evasive when asked probing questions, won’t look Peter in the eye, and cries when put on the spot. In other words, marriage material. As if that weren’t alarming enough, she deflects when Peter asks pointed questions about her shady past and gaslights him. Apparently this is Peter’s idea of foreplay, because she gets a rose without even introducing him to her family on her hometown date! Meanwhile Kelley is kicked off for daring to refer to the experience as “fun” and Kelsey is eliminated for daring to be clear about being in love with him.

Me watching Peter give Victoria F. the rose:

Even if we don’t buy into the format of The Bachelor as a realistic way of finding everlasting love, at the very least, we want to be able to root for the Bachelor and the woman he chooses in the end. Unfortunately, the elevation of drama this season, and Peter’s flagrant revelry in it, has made this extremely difficult, if not impossible. As a card-carrying messy b*tch who lives for drama, it pains me to say that there can, in fact, be too much of a good thing. Peter’s false and immature belief that love must be difficult colors his decision-making throughout this season, to the detriment of not only the two women who aren’t there to expand their brand, but also to us viewers. Just when we thought The Bachelor couldn’t get more ridiculous, our trusty pilot flies in and makes it a full-on farce.