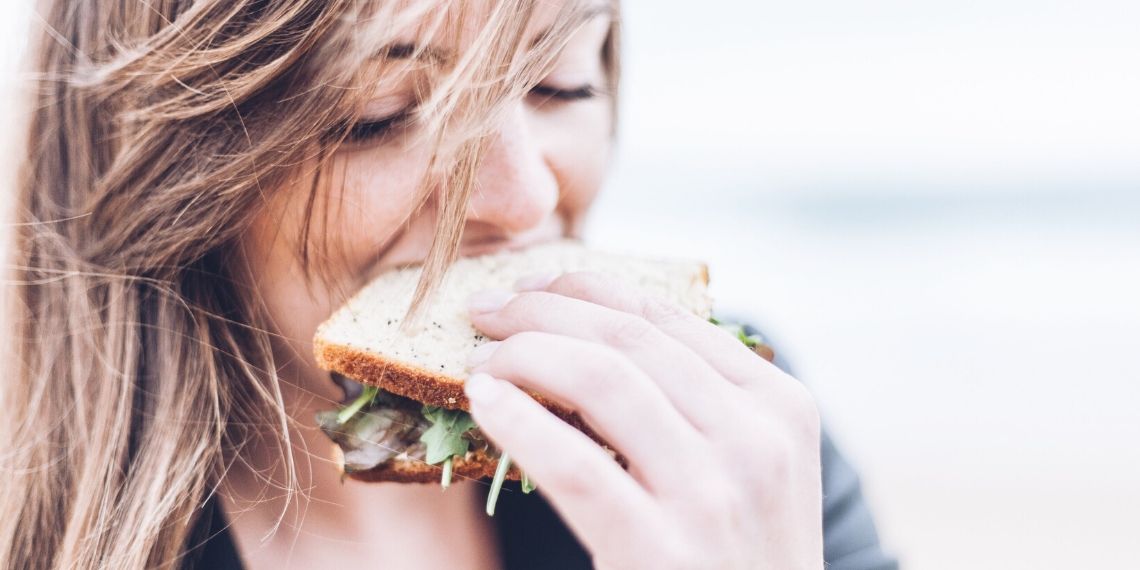 How I Lost 50+ Pounds On “The Fast Metabolism Diet”

For as long as I can remember, I’ve had a difficult relationship with food. I don’t mean that as just something people say—the whole “as long as I can remember” thing. I literally recall being five years old, looking in the mirror, and thinking, “I’m fat.” Pretty brutal for basically an infant to think about herself, but as the years went on, those critical thoughts only grew and evolved. I hated my thighs, the ones that smushed together when I sat, and I hated my wide hips, the ones that pushed me into the juniors section long before my third grade classmates joined me there.

It wasn’t just puberty and the appearance of my childbearing hips that made living in my body feel unbearable. It was my addiction to food that caused the never-ending battle. One I didn’t even realize I was fighting until I was fifteen. Until I started skipping meals, tracking calories, and eventually, throwing up everything I ate.

As a recovered-ish binge-eating-anorexic-bulimic with severe food anxiety (doesn’t that sound like something straight out of a bullsh*t movie starring Emma Roberts?), diets have been my foundation since I started trading my lunch for a Diet Coke in 5th grade. As someone who was always just overweight enough to warrant comments from family members about her “plump” figure and “chubby” frame (*cough* assholes *cough*), I’m no stranger to viewing the scale as the enemy. Eating in moderation does not come naturally to me, and the sporadic “treat yo’ self” meal can cause a spiral that results in a 10 pound weight gain in the blink of an eye.

So, naturally, I’ve done all of the diets. ALL of them. I’ve done all of the teatoxes. I’ve tried all of the bullsh*t shakes and supplements that girls from my high school who got knocked up and stayed in our hometown sold via Facebook messenger. I am that cliche. From Keto to Whole30 to The South Beach Diet and to my own special diet called “eat everything in your pantry in one sitting and hope your body won’t transform it into fat”—I’ve tried them all. Most I’ve had some success on because when you cut out having cake after dinner and pizza four times a week, odds are you’ll drop a few pounds.

The tricky part of my diet and health journey, however, has always been restriction and control. As someone with a LONG history of eating disorders, any doctor can tell you, diets are pretty precarious. It can take one slipup, one day of being too lax or too strict to completely relapse. So, sure, I can have success with these diets, but when they involve cutting carbs for months or foregoing fruit for weeks, it really f*cks with my head.

When a friend of mine told me about a diet where you’re literally eating nonstop, not expected to work out like a crazy person, and don’t have to give up carbs, I was intrigued. I was staying at her house for a weekend and she came into the kitchen, blurry-eyed, and said she needed to eat breakfast right then. She made a piece of toast, topped it with some turkey bacon and an egg, grabbed some carrots and a carton of raspberries, and went back to her room. When she emerged an hour later, bright-eyed and showered, and I asked her what that was about, she told me about the diet. The diet that requires you to eat within 30 minutes of waking up. That forces you to eat TONS of food. The diet she had been on for a week and already lost five pounds on. The diet that would quickly change my life.

Enter: The Fast Metabolism Diet (and by “diet” the author coined the phrase “Did I Eat Today?”).

From the excerpt on Amazon, this pretty much sums up the whole eating plan:

Created by celebrity nutritionist and best-selling author Haylie Pomroy, this is the first and only actually healthy diet I’ve ever been on. It encourages resting the body, not overworking it with tons of exercise, and eating delicious, wholesome meals. And before you think this is an ad, it’s not. If Haylie wants to pay me, that’s cool (my DMs are open, girl), but the truth is this plan just really f*cking works. Don’t believe me? Take a peek. I was on and off the diet for a little over a year, and here are the results:

I lost 51 pounds on The Fast Metabolism Diet over the course of a casual 15 months. That was including indulging over the holidays, drinking at parties, and taking breaks in between months of being steadfastly healthy. I could have lost it faster if I did the month-long diet back-to-back, but that’s just not how I function. I’m like, really popular, and giving up drinking (yup, you have to give up alcohol) for multiple months at a time was a no-go for me. While I did gain a decent portion of it back post-wedding (that’s what going to Italy for a month will do to you), so now I fall somewhere between those two photos, I’m officially back at it. In the 12 days that I’ve been on the FMD, I’ve lost just over 10 pounds. And that’s from eating a sh*tton, doing very light (if any, tbh) exercise, and messing up a few times when I forgot to go to the grocery store.

So, how does it work? Let’s break it down:

Phase 1 (which happens every Monday and Tuesday) is all about healthy carbs and sugars. So, your meals are full of fruits and rice and pasta and sandwiches. Sure, you have to have sprouted grain everything, but honestly? Any diet where I can have quinoa and bread without shame is one for me. As for exercise, you need to do one day of cardio (which I skip a lot, tbh).

Phase 2 (which happens every Wednesday and Thursday) however, is where things get tricky. This is the only 2 days of the week I dread because honestly they’re lame and they low-key kinda suck. Basically, you’re restricted to meat and veggies these two days. That’s it. But if you’re on a strict diet and only 2 of the 7 days kinda suck, then I’ll take it. Exercise? With all the protein, this is the time for strength training. You’re required to do one day of weights or something similar (again, an activity I keep “accidentally” missing).

Phase 3 (which happens, you guessed it, Friday, Saturday, and Sunday) is a mix of both of the above phases, plus you get to add in healthy fats like oil, nuts, and avocado! Easily the best of the phases, this is where your meals are full of lots of colors and lots of variety. You can make almost any meal you love fit into this phase (one of my favorites is making a mock Chipotle bowl. WITH guac, of course). If you thought this was great, the exercise portion of this phase is even better. You’re required to do something light that promotes blood flow like stretching, yoga, or getting a massage. Seriously. It says it in the book. GETTING A MASSAGE COUNTS AS EXERCISE IN THIS DIET. HAVE WE DIED AND GONE TO HEAVEN?!

What does a day on each phase look like? Glad you asked. Here’s an idea of what I eat:

Phase 3:
Breakfast: Sprouted grain toast with an egg and turkey bacon plus celery and berries on the side
Snack: Carrots and hummus
Lunch: Chicken curry
Snack: Nuts
Dinner: Steak, veggies, guac, and salsa wrapped up in a sprouted grain tortilla with some extra carrots on the side.

The pros: You get to eat a ton, you don’t cut out full food groups, and you really will lose weight without feeling like you’re totally restricting yourself. Plus, as someone who can backslide into disordered eating easily, there are no points, no counting calories, and no tracking grams of fat. You just eat the foods you’re supposed to eat at the times you’re supposed to eat them and you lose weight.

The cons: Like most diets, it’s hard to go out to eat/have a normal social life. While, sure, you *can* manage it, it’s easier just to make your own food. Which brings me to another con. You have to make A LOT of food. Plenty of it you can cook in bulk and freeze for later phases but ultimately, it takes a lot of cooking and prep (and pricey grocery runs) to pull this one off. And the worst part? No alcohol and NO caffeine. None. Nada. During later months when I was already losing lots of weight, I added a cup of coffee back into my life, but until then waking up without that jolt took a longggggg time to get used to.

Ultimately, despite the cooking and the lack of coffee and cocktails, I’ve never met an eating plan that I’ve loved as much as the FMD. And because Hayle (and her PR team) sum it up much better than I ever could:

“This is the silver bullet for the chronic dieter who has tried every fad diet and failed, the first time dieter attempting to kick her metabolism into gear, and anyone who wants to naturally and safely eat her way to a skinnier, healthier self.”

A-f*cking-men. Follow along with me as I continue along with this plan or join the metaphorical club and start with me. The best part? When you finally drink again, your tolerance is so low you’ll get schwasted on like, one glass of champs (which will save you time AND money). If that isn’t the best reason to diet, idk what is.