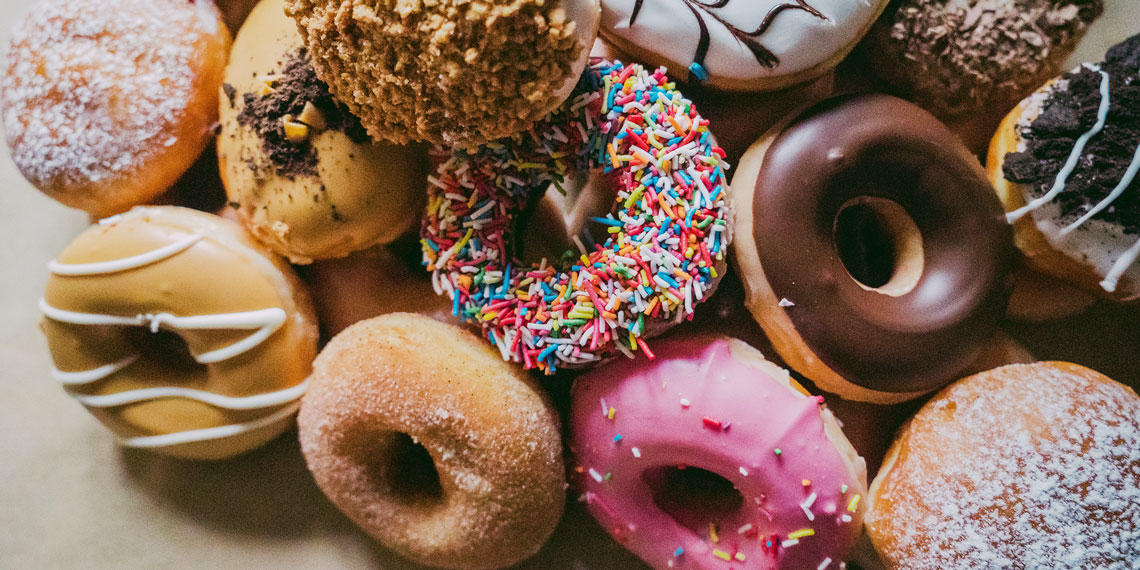 This Is What Happened When I Cut Out Sugar

Pregnancy makes your body change in really weird ways. Huh. The more you know. You may suddenly crave things you’ve avoided for years, like Flamin’ Hot Cheetos (ily) or German potato salad (ily most of all). Disturbingly, you may also suddenly NOT crave things you’ve been literally addicted to for most of your adult life. This isn’t an essay where I detail how I got off hard drugs once I became pregnant. I’ve never been cool enough for hard drugs, anyway, much to my 5th grade D.A.R.E. officer’s pleasure. No; this is about how I unknowingly unhooked myself from sugar, thanks to the fetal slug growing inside of me. Turns out pregnancy is good for something!

When you go from eating cookies, bonbons, chocolate bars, truffles, and toffees at some point every single day to only eating sugar naturally occurring in fruits and some carbs, your body drastically changes for the better. For reference, I’ve always had a sweet tooth. I’ve always craved ice cream, cake, or pie at the end of a meal. When I landed a job at a chocolate factory back in November, I was convinced that I’d need both legs amputated due to Diabetes-related complications by age 50, and that was chill, because sugar, to me, was my favorite drug. In my day to day, I would “taste-test” anywhere from one to six bonbons whether I needed to for new collection QC or just because of my “treat yo’self” mentality. That’s in addition to maybe grabbing a piece of chocolate cake or coconut macaroon to eat at my desk or take home. Dessert and sugar is around me all day, every day.

When I got pregnant, though, I slowly started not wanting my usual cookie pick-me-up’s, my dark chocolate snacks, and my gooey caramel turtles. What followed was weird and kind of neat, tbh. Here are some of the insane ways my body changed when I stopped giving it sugar and started giving it good sh*t.

At First, It Sucks

Like going off of any drug cold turkey, quitting refined sugar is a rough ride. It isn’t quite to the level I’ve seen people go through in my viewings of Intervention after quitting black tar heroin or a really serious drinking problem, but I definitely registered feeling less than amazing in the weeks following my aversion to the sweet stuff. On top of that, the big quit perfectly dovetailed with the legendarily sh*tty first trimester symptoms I was already experiencing. Exhaustion, nausea, headaches, and just generally feeling f*cking terrible were my reality day to day. I don’t know how much of that I can attribute to sugar and how much of it I can attribute to the clump of cells deciding to f*ck my sh*t up, but, regardless, I felt HORRIBLE and made sure everyone around me was aware of it.

According to Saveur, “Studies have shown that eating sugar releases dopamine in the brain. Dopamine helps us register pleasure. In some people, the pattern triggers an addictive reaction and, when the brain is denied its fix, dopamine levels plummet.” In other words, a lot of those symptoms I experienced may have been linked to my pregnancy but were exacerbated by my choice to not eat sugar. The headaches, dehydration, and fatigue are all common side effects of getting off the white stuff.

According to Healthline, you can also expect cool sh*t like depression, anxiety, sleep issues, brain fogs, and cravings when you decide that veggies and protein are better choices than Reese’s and ice cream. Luckily, a lot of the withdrawal symptoms are out of the picture (and were for me) after about three weeks, which is when you can actually start seeing the benefits of quitting sugar.

My Skin Got Better

I’ve always had decent skin, with a few zit and cystic acne issues from time to time. When I went off the pill last July in preparation for pregnancy, I was convinced I’d flare up and have a pizza face. Kinda, yeah. Once I got pregnant, I was, again, convinced my hormones would cause an issue visible on my skin. That was around the same time I stopped turning to sugar for solace and love. No flare-ups noted. I have to attribute that to my now dwindling interest in cake, cookies, and artisan chocolate bars. Apparently, there’s science to support my now dewey, blemish free complexion, too. According to Prevention magazine, “One study in the American Journal of Clinical Nutrition found that when non-soda-drinkers consumed one 12-ounce can a day for 3 weeks, their inflammation levels increased by 87%.” So, logically, if you cut out that soda and other sugary sh*t, your inflammation levels drop, and your skin will thank you for it. I know mine has.

On top of that, aside from the boost of pregnancy hormones that can up your “glow” factor, ditching sugar can boost both collagen and elastin in your skin, making it bouncier and younger-looking. That sounds great for me, considering I’m about to look really old, tired, and haggard after this kid sucks the life out of me.

Obviously, cutting back on sugar can greatly help with the whole weight thing. What I noticed, though, was that the stubborn belly fat that I’ve gotten really good at sucking in and/or hiding under flowy maternity tops started to disappear. Think about it—if I was eating an extra 200-300 calories in sugary snacks (truffles, chocolate bars, etc.) without realizing it, dropping that has me on track to lose like, 10 pounds in six months… or, at least, I would if I wasn’t pregnant. Thanks a lot, baby.

According to Business Insider, “Added sugars are high in calories and your body processes them more quickly than other energy producing foods, like fruit and nuts. After having a sugary treat, your energy levels will peak and fall much quicker than if you had an apple, and you’ll find that you feel hungry again much sooner.” So, instead of getting hungry for a sammich after slamming two to four truffles, I’ve found that my energy stays pretty even all day, I don’t crave more food, and, therefore, I eat less calories. Boom, weight loss and a less pudgy tummy (for like, another few weeks, anyway).

I Have More Energy

Lastly, my energy levels and brain fogs have been much, much better since I’ve curbed my sugar addiction. Before, I’d start hitting a wall (like most of us) around 10am and 2pm. I either needed a sugar pick-me-up, a nap, or a jolt of caffeine to help me focus on, well, everything. I didn’t even realize that a lot of those slumps were caused by my sugar issues. Basically, if you eat foods that have a high glycemic index (i.e. things that are full of sugar), they’re released into your bloodstream quickly, giving you that known sugar rush. However, your energy also drops super fast, since your body is using that “energy” right away, instead of releasing it slowly over time. When you cut out super sugary foods and drinks like soda, candy, and baked goods, your body is able to stabilize your energy, so you’re less likely to feel a huge drop off that leads you to continue the cycle.

Here are the biggest takeaways if you managed to read through all this. First, being pregnant makes you crave (and not crave) weird sh*t. Second, I didn’t cut out all sugar ever; I still eat fruit, nibble the occasional Fig Newton, and may indulge in a spoonful of ice cream here and there. But I don’t snack on sugary sh*t throughout the day. Chocolate and actual candy has lost nearly all of its appeal. I’ve never been a soda or soft drink person, so water is still my beverage of choice.

However you approach cutting back on sugar, know that if I can get through it during first trimester symptoms, you can do it, too. It’s totally worth it, and you may even lose a few pounds. Praise be.