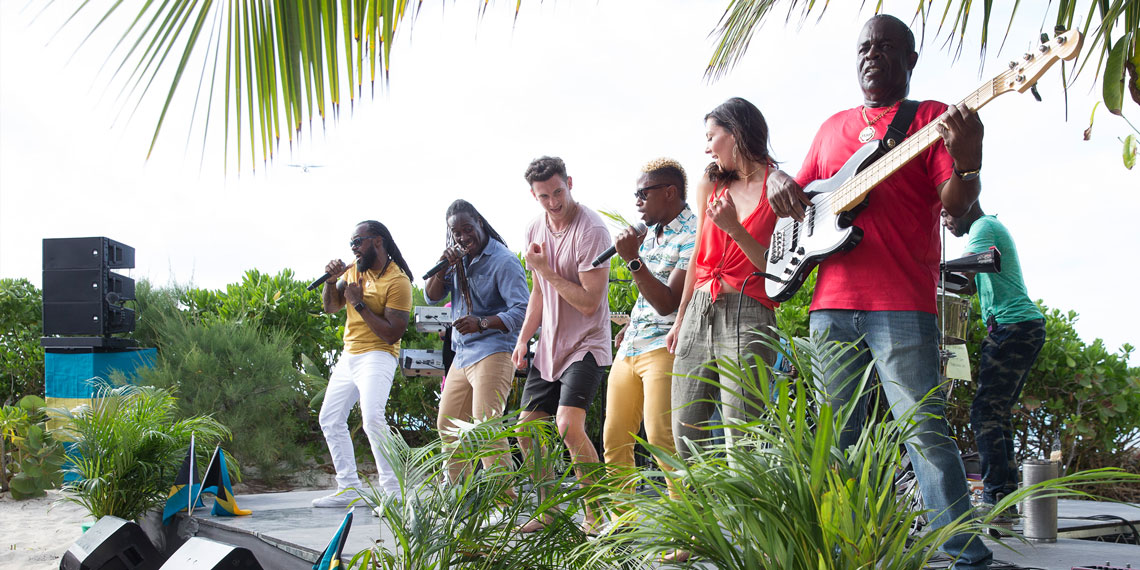 Well, fam, I’m back! Back spending another Monday held hostage by Mike Fleiss and his dynamic storytelling. Imagine that. To put things into perspective for you, last week I was relaxing lakeside with a cocktail and not a care in the world, and this week I’m crying on the phone to Optimum about my shitty internet while they ask, “did you try turning it off and then back on?” Such is life. Anyway, to those of you who missed me last week, I’d like to hear a little more praise in the comments. Thx. For those of you who didn’t, well, you can go shave your back now. Okay, moving on. This week Becca and her boys are off to the Bahamas! How romantic.

Okay, Becca is acting like the Bahamas are a goddamn seventh wonder of the world.  She’s like “it’s unlike any place I’ve seen before,” and that makes sense because so far the budget for her season has been about as extravagant and over-the-top as a Sbarro birthday party.

CHRIS: You’ve never been here before? To the Bahamas? Tickets are like $300 round trip though?
BECCA: Nope! Never!
CHRIS:

Back at the bangin’ accommodations ABC was able to pull off, the men start quietly going to pieces at the notion of having to actually introduce this stranger to their parents in another week. They have watched this show before, yes?

Sidenote: Wills is wearing a cheetah print RompHim, barely enunciating his words, and he’s STILL the best catch on this entire godforsaken show. Brb, just going to start a grassroots campaign for his #Bachelor candidacy right this fucking minute.

Colton gets the first one-on-one date this episode, because I guess production finally got tired of my weekly irate DMs about when we’re going to see the big virginity reveal. You’re welcome, everyone.

Becca whisks Colton away and Blake looks like he’s three seconds away from popping a blood vessel and telling Becca right then and there that Colton is a virgin with a capital V.

EVERY MAN IN THAT ROOM’S INNER MONOLOGUE RN:

Becca’s like, “I picked Colton because have you seen his abs?” Which, like, fair, but also BECCA YOU’RE GOING TO MEET HIS FAMILY NEXT WEEK AND THIS IS ALL YOU HAVE TO SAY ABOUT HIM?? I fucking quit with this show.

COLTON: I haven’t felt this excited about a girl since Tia rubbed one out on me last summer.

WAIT. Is Colton finally going to tell Becca that he’s a virgin?? Is he?! Oh of fucking course ABC has to interrupt his big reveal by sending in some island man to wreck the moment.

ISLAND MAN: Would you like to dive for conch?
BECCA: Oh I loooove conch. I can’t get enough conch.
ALSO BECCA: Conch sounds like cock, get it?
ISLAND MAN:

Yeah, that’s good Becca. Mock the accent of the guy who has to make a living off of helping dipshits like you dive for seashells. Nice.

Moving on to the conchtail portion of this evening (lol I crack myself up). Colton’s like, “so I have something to tell you” and you know Becca’s mind immediately goes to Tia rn. She’s got to be wondering if now’s the time when she finally finds out about where Tia and Colton “just kissed” last summer. No worries, B, he’s not into Tia! He just has no idea about the female anatomy! Mazel Tov to you both!

Is it just me, or does Becca look pissed? Omg why is she acting this way? Becca storms out of the Atlantis dining hall and leaves Colton and his hymen alone. I can’t believe she’s this pissed about not being able to bang him.

Becca comes back after crying outside about the sex that could have been and this is so fucking uncomfortable. She’s like “I’m not going to judge you except for those 10 minutes immediately after you told me and I flipped out.”

Becca gives Colton a rose anyway, though, because have you seen his abs? Also, who wants to bet three seconds after this dinner ended she sent Tia a picture of him and that rose?

Garrett gets the second one-on-one date of the week, because apparently Becca is into abs and bigotry. I swear her taste in men is less sophisticated than her taste in evening wear. And I’ve seen a lot of fucking low-rent sparkles this season.

A water plane picks the couple up for the day and the plane literally has Tia’s name written on it. Did anyone else just see that? Like, did ABC drain their entire budget trying to get Wayne fucking Newton on the show that they couldn’t get enough cash to fix the plane they booked when Tia was still going to be The Bachelorette?? Also, I’m happy that Tia has at least one petty camera person still on her side who’s willing to undermine Becca one subtle panoramic shot at a time. I hope that helps her sleep at night.

BECCA: This is so romantic. There’s no one else around us.

Yeah, except a camera crew and all of America mocking you. Because in that bathing suit, they absolutely will be.

God this date is so boring. Becca thinks Garrett might be a good guy and so she tries to pick him apart bit by bit until she finds something to hate about him. This is literally a technique I use after a second date when a guy calls me back, pays for the bill, and treats me with respect. So, like, I get it.

Becca’s like “he’s so happy and carefree all the time and I don’t trust it.” Smart girl. Clearly there are no intimacy issues here. Nope, not at all.

Their date ends with Garrett getting the rose and Becca taking off her clothes because she’s been sending mixed signals to him all night so why not throw a little nudity into the mix too?

Blake and Becca’s date starts off with a special performance from the Baja Men! Tbh I’m not sure what I find more disturbing here: Blake’s dance moves or the fact that ABC paid ACTUAL MONEY to get the people who sang “Who Let The Dogs Out” on their show. Like, are they just lighting money on fire at this point?

Okay, Blake is barely holding it together on this date. His emotional state might be less stable than Selena Gomez after she saw Justin Bieber’s engagement announcement last night. So, like, not well bitch!

Ah, so Blake has a sob story. I mean, it’s about divorce, but he does have that nice small town spin on it. But was nobody else disturbed and intrigued by how quickly Blake snitched on his mom?? I’d disown my children for far less than outing my affair on national television, I’m just saying. Tbh Becca loves a good sob story so this might actually work in Blake’s favor.

Blake keeps talking about how hard it is for him to open up with people, but I’m not buying it. The boy has had more emotional breakdowns in this one episode than I’ve had since realizing I forgot my headphones as the subway doors close. Please.

BECCA: I find it so attractive that you constantly talk about how into me you are.

Jesus. Her bar is s so low.

We’re 2.5 seconds into this group date, and I can already tell that this is going to end in heartbreak—and obviously I’m referring to my heartbreak here, because I have a feeling Wills isn’t going to make it. Blake got a rose on his one-on-one, which means Leo, Jason, and Wills are all competing for the same rose on this date. I have a feeling that this is where Becca cuts any guy who doesn’t shop at the Gap from her “journey of love”. Mark my fucking words.

The first part of the date involves a game of beach volleyball. Because nothing says romance like team sports. Okay, there are so many different personalities on this date rn. We’ve got Wills, who is too pure for this world. Then there’s Jason, who is the physical and emotional embodiment of my grandfather whose biggest life accomplishment is his timeshare in Florida. And finally, Leo, who would never have even made it this far without his hair.

Oh shit! Leo and his forehead kisses get sent home. See you in Paradise, buddy!

We get to the cocktail portion of this evening and it’s Wills vs. Jason. Everything’s fine, but I am breathing into a paper bag. Just fyi.

Becca pulls Jason aside first and immediately starts bitching about how he hasn’t declared his undying love for her yet. She’s like “the other guys have lied to me about the extent of their feelings already and you haven’t so I’m considering sending you home. Do you have anything to say for yourself?”

JASON, TELL HER YOU DO NOT NEGOTIATE WITH TERRORISTS. Like what is this? She shouldn’t punish him for needing more time to figure out his feelings for her. Like, has he even had a one-on-one date yet? Or is he just like, the one she always makes out with in a corner every group date?

She seems to have a good conversation with Wills, but that means nothing. This bitch is more fickle than I am with my diets.

JASON GETS THE ROSE. OH MY FUCKING GOD. I DON’T KNOW WHAT TO FEEL. On the one hand, I’m devastated for Wills. On the other hand he deserves happiness too, you know? All I’m saying is his Bachelor 2019 Campaign starts right fucking now.

Oh god he’s crying! Becca doesn’t even pretend like this was a hard decision for her. She keeps awkwardly patting Wills’ knee and looking at her nonexistent watch and it’s like REMEMBER WHEN HE TOLD YOU YOU MADE HIM BELIEVE IN LOVE AGAIN.

Okay, Wills is acting classy AF. He won’t even break down in front of the cameras for ABC’s sick pleasure. Meanwhile, the camera keeps panning to Becca dry humping Jason on a pool chair. WHERE IS THE JUSTICE IN THIS WORLD.

Okay, well, I’m out, betches. Oh, and ABC, congratulations, I’m emotionally ruined. YOU GOT ME. Anyway, can’t wait to tune in next week to watch Tia make one last play at sabotaging Becca’s happiness. Should be lit!