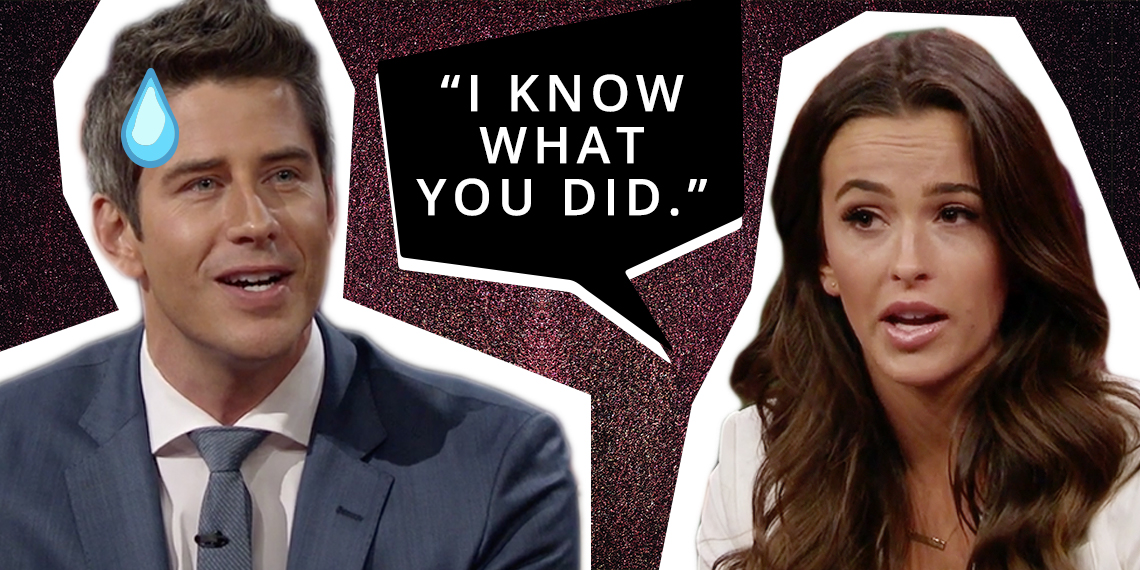 We Know What Arie Did, And It’s So Messed Up

This post contains major Bachelor spoilers, so if you’re super invested in this absolute garbage “love story,” click away now.

Last night at Women Tell All, Caroline told Arie, in a way not unlike a mob boss, that she KNOWS WHAT HE DID. Some of the other girls were nodding in agreement. The interesting thing is, Arie did not deny or defend anything, he sort of shrugged it off. He just responded, “That’ll play out.”

If you’ve ever had someone you love had their heart ripped out….. you’ll get where I’m coming from tonight. pic.twitter.com/KunIHekxDn

Because I have absolutely zero patience, I did some research and now we also KNOW WHAT HE DID. Major Bachelor spoilers ahead, obviously, so get out now if you don’t want to have the finale ruined for you.

According to Reality Steve, in the finale, Arie dumps Lauren B., personified cardboard, and he proposes to sweet, charming Becca from Minnesota. You may be thinking, “Wow, that’s actually a pretty mature move from a man whose entire personality is literally male mediocrity personified. Maybe I was wrong about Arie Lyuneedledick this whole time!” Nope. Just wait.

Becca K. and Arie are happy. They are ~in love~. But it turns out that not only is Arie here to ruin your favorite show, he’s also here to ruin Becca’s life! They are probably off popping Champagne, when Arie, reigning queen of fuckboys, brutally dumps Becca’s ass because he CHANGES HIS FUCKING MIND AND WANTS LAUREN B. INSTEAD. Somewhere in the distance, Dean Unglert breathes a sigh of relief.

YES. The dumbass proposes and then he changes his mind. This man’s only full sentence this entire season is to dump a cute and smart sweetheart who’s already been through the emotional wringer. SOMEONE CALL UNCLE GARY! As far as we can tell, Becca’s only crime against Arie was being a brunette.

So, Arie totally devastates and blindsides Becca, and then goes off to find Lauren B., who was probably staring silently at a blank wall.

And here’s the worst part. Lauren B, who is so insecure she could not speak to Arie on their dates and instead just repeated whatever he said like a fucking parrot, TOOK HIM BACK after he dumped her on national television to propose to another woman. Lauren, sweetie, we know dating is rough out there, but even cardboard doesn’t deserve this wet towel of a man.

They are now dating. Not even engaged, because who would get engaged on a TV show, of which they are the lead, that is about getting engaged? Not fucking Arie Ludenvoldemort Jr.

And that is how this true love fairytale reality TV romance ends.

I’m sure now that Lauren B. found her Prince Charming, they will be very happy together forever and nothing could possibly go wrong . Somewhere deep in Weiner, Arkansas Tia is conducting a séance.

At least Becca got to keep the Louboutins and avoided a lifetime of fuckery from this idiot. They’re still more valuable than his entire racing career.

Anyway, here’s some photos of Caroline, Becca K., and the other girls plotting Arie’s imminent demise. We should’ve let Kenny take him out when we had the chance.

These poor girls are stuck with me for life. ♥️ #thebachelor #sisters