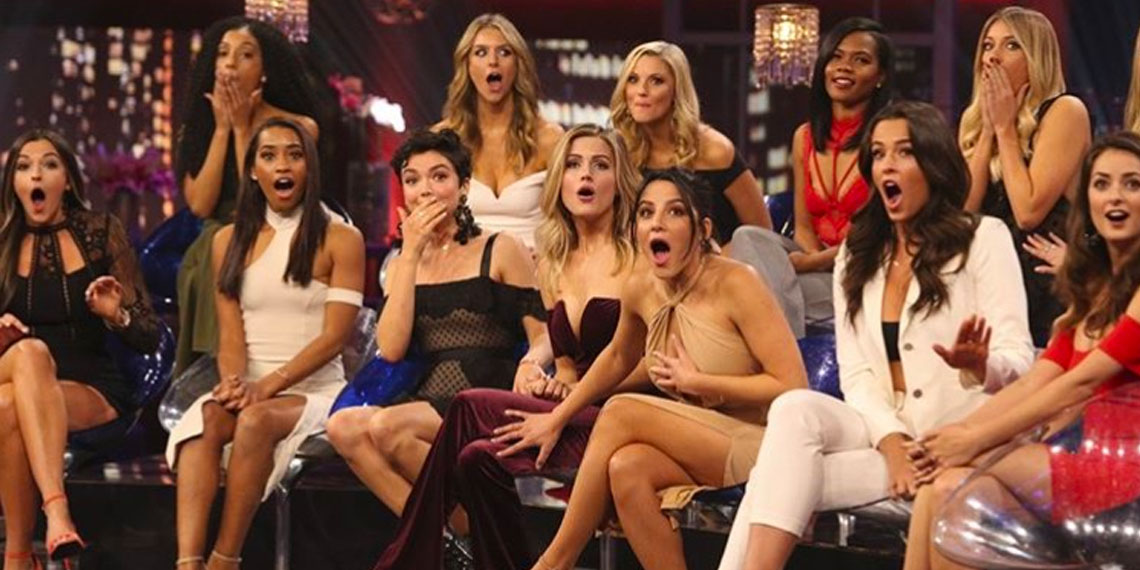 The Best ‘Bachelor’ Recap You’ll Ever Read: The Women Tell All

Somehow we made it to The Bachelor: The Women Tell All and brace yourselves, people, because THE TEA IS ABOUT TO BE SPILLED. I know Chris Harrison literally says this about every tell-all, but I really do believe this might be the most dramatic episode ever. Why do I think this, you may ask? Because Arie just tweeted this v inspired message about tonight’s episode: “Bachelor in Paradise auditions wait I mean ‘Women Tell All’. Tune in tonight, good old fashion drama.” *slow claps* Okay, Arie. All the flavors in the world and you choose to be salty? Well, fam, if that’s not telling as to how this tell all is about to go then IDK what is. Let’s do this people!

Chris Harrison brings out the women, and it’s good to know that Jenna’s coke problem is still alive and well.

^^ Actual footage of Jenna at the tell-all

I mean, if it’s not a coke problem then I’m sincerely alarmed by her energy levels. Sincerely. Alarmed.

We’re 15 minutes into this tell-all and already talking about Bekah M and her age. Thank god I didn’t devise a drinking game around this or I’d already be wasted. Bekah keeps talking about how she’s feeling personally victimized by the other women and I’ve honestly had enough of this bitch. If she didn’t want her age to be an issue than she shouldn’t have made it such a big deal in the first place by being literally the only woman to not disclose her age until she was forced to . BYE.

Moving on. Chris invites Krystal up to the hot seat, and she seems to have matured since the last time we saw her. And by “matured” I mean she no longer sounds like a baby prostitute. Interesting. Let’s hope that this scandal is addressed here tonight.

Yo, are we finally getting to find out what the fuck happened during that group bowling date? ARE WE?? Is ABC actually going to give us an answer for once in the entire history of this godforsaken show?

Wait. So all Krystal did off camera during the bowling date was call Arie a needle dick? Descriptive, but also not that different from how I’ve been describing him for the past eight weeks, so.

Ah, my favorite moment during a tell-all: when the floor is opened for a public skewering. *turns up volume*

Bekah M, the girl who actively tried to hide her real age from Arie for six straight episodes, just urged Krystal to “be the real her!” and to be “open and honest with people!” Lol k.

Wow Caroline is auditioning HARD for her spot on Bachelor in Paradise. She’s like “how dare you hurt these ladies that I love with all my heart” and it’s like, didn’t you go home week three? Yeah, you love these ladies about as much as you’d love to endorse a tea that gives you the runs. Please.

Olivia, a girl whom I’ve never seen before in my entire life, asks Krystal the question that’s been plaguing me all fucking season: what. is. with. the. voice.

Lol did Krystal really just blame her voice change on a sore throat? Damn this girl is better at spinning facts than a Fox News anchor. Don’t ever let anyone tell you that you aren’t going places!

Is Krystal trying to say that her competing for Arie’s heart brought her brother out of homelessness? Not to nitpick here, but how does one watch The Bachelor if one is homeless? Hmm?

ME LISTENING TO KRYSTAL’S STORY RN:

It’s Seinne’s turn to take the hot seat and I can’t wait to hear all about how she cured cancer in her downtime during The Bachelor filming.

SEINNE: But watching it all back I realized it wouldn’t have worked out.

I have nothing else to say about Seinne except that she and Oprah should run for president. #SeinneOprah2020

Andddd we’re back to debating Bekah’s age. Brb just going to go open more wine because I’m gonna need at least six glasses to get through listening to her defend her maturity for the gazillionth fucking time.

Bekah brings up an excellent point about how none of the other young AF women competing over Arie were ridiculed for their age. Which might be true, but I’m having a hard time taking her seriously when the way she’s holding herself rn rivals  Michelle Tanner in a time out.

Ah, yes. The infamous missing person’s report. I thought you’d never ask, Chris. Bekah tells a lovely story about how she went up north with some friends to a MARIJUANA CAMP  just to “chill” after her time on the show. Honey, baby, sweetie. You really still think you were mature enough to get married to a man who wears cardigans and told you he goes to bed by 9pm? Really?? Your mother still expects you to text her when you get home from a party!

Surprise, sur-fucking-prise, Bekah is officially going to Paradise. And a FabFitFun model was born.

CHRIS HARRISON: Please don’t report your daughter missing this summer because she’ll be getting blackout with us on a beach in Paradise.

It’s nice to know that she’s already got plans for her senior year spring break.

Moving on to Chris’s next victim: Tia. First of all, she looks amazing in that romper. This is a real step up from that Flintstone-inspired atrocity that assaulted my retinas last episode. Heartbreak looks good on you, girlfriend! Chris is like “I’m not sure if this makes things better or worse but Arie did tell me he had regrets about sending you home.”

So what I’m gathering from this entire episode is that Tia and Seinne are the frontrunners for The Bachelorette? I’m not mad about it.

They bring Arie out for the last 15 minutes of this shit show. Cool, cool. It’s not like I’ve spent the last two hours waiting for a room full of jilted women to rip him a new asshole. By all means, ABC, drag this out with one more fucking commercial break. You know how that thrills me.

Some highlights from my favorite parts of The Roast of Arie Lkjfnghbkjlgnhn Jr:

ARIE: I just feel more things for her.

JACKIE: You were so supportive of me and my degree that you didn’t at all try and stop me from leaving the show.

ARIE: Thank you. I appreciate that.

BEKAH: I’m still totally mature and ready to get married.

ARIE: I’m still totally down to bang after the show.

I paraphrase, you know?

Okay wtf is this cryptic-ass message Caroline just dropped on us? She’s like “I know what you did and how dare you” AND WTF ABC. WE JUST AREN’T GOING TO TALK ABOUT THIS? *throws laptop at the wall*

Arie has one last showdown with Krystal and it’s about as dramatic as Arie’s hand gestures all season.

Krystal is like “I’m sorry I’m a jealous bitch but I hate when my boyfriend has other girlfriends.” To which Arie responds with: “You know this is The Bachelor, right?” Ooohhh I hope she has ice for that third degree burn, Arie! Seriously, that’s the best you could come up with dude?

On that note, I’m outtie. Until next week, betches!