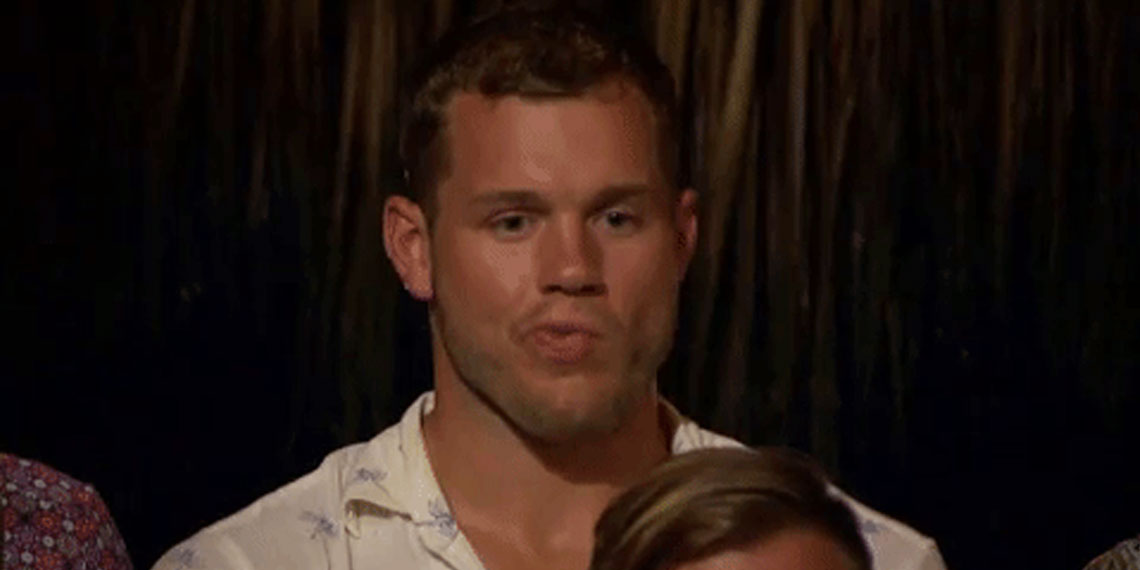 Welcome back to Bachelor in Paradise! The show that leaves us shackled to our couches for 4-6 hours a week. When last we left off, Chris was interrupted in the middle of comparing living, breathing women to courses in a meal by Tia who, hopefully, came armed to this conversation with a shoe so she can beat him to death with it. I’m rooting for you, Tia!

TIA: You told me that I deserve the best.
CHRIS: You do.
TIA: But you made out with Krystal.
CHRIS: I did. But I’ll fight for you.
TIA:

Okay, see this is what’s wrong with modern dating right here. They keep talking in circles around each other and Chris might as well be speaking in Pig Latin for all the sense he’s making rn. Tia is pissed because Chris told her he would commit to her, meanwhile Chris is saying that he did mention commitment to her but will actually do the opposite. But, hey, at least he said the word commitment! That’s got to count for something, Tia!

Jesus. This talk is making me want to call my internet company and abandon the sh*tty internet plan that makes it possible for me stream this abomination on clear, cloudless days only. Tia keeps saying Chris’s argument doesn’t make sense—and it doesn’t—but what really doesn’t make sense is how either of these women can fight over him while he’s wearing that fugly bandanna.

Moving on. Oh, that poor parrot needs to stay far away from Kendall. Next time we see it it will be on her wall.

Tia thinks that because Colton warned her about Chris, Colton is in love with her. It’s flimsy evidence at best, but her crazy ass will take anything she can get.

HAHA. Tia yelping “help” after realizing she’s insane is me in the mirror every morning.

Jacqueline and her monotone voice emerge from behind a palm tree. Idk why, but there’s something v unnerving about Jacqueline to me. I think it has something to do with the full set of baby teeth hiding in that tiny mouth of hers.

Bibi’s like “she doesn’t smell like Paradise yet. I’m screwed.” Bibi, this girl has the personality of a mechanical pencil. I think you’ll be fine, girl.

Jacqueline pulls Colton aside as Tia is literally in the middle of professing her love to him again. Lol this should be good.

JACQUELINE: Can I steal you for a second, Colton?
TIA:

WHAT. Colton turns Jackie down?? First of all, you can do that? Second of all, he can’t say no to a date! What does he think he’s here for?  To sip on his Mike’s Hard and work on his tan? Absolutely not. You’re never going to lose your virginity with an attitude like that, Colton!

Colton tells Tia that he’s still into her but he doesn’t want to, like, do anything about it. Now, if you’ll excuse me, I’m just going to stick my head in an oven. Are you effing kidding me with this, ABC? Honestly, this Colton/Tia thing has gone on far too long. I’ve had enough. Someone murder them both already. For f*ck’s sake.

Jackie picks Kenny for the date because one of the producers lost a bet and had to make this happen. That’s the only way these two on a date makes sense. I’ll be shocked if they find anything to talk about. Fingers crossed the producers don’t have to resort to poking them with sticks to generate any sort of human emotion!

Clearly this love story was written in the stars. Good luck, kids!

Back at the beach, Annaliese is patiently waiting for Kenny to get back from his date. She’s like “I have to get a rose tonight. I. have. to.” Damn, this girl did not come to play. She immediately pulls Kenny aside to show him the pink goo she picked out for dessert.

OH MY GOD DID ANNALIESE JUST SAY SHE WANTS TO OPEN HER SEXUAL DOOR TO HIM? Does she mean, like, her back door? Is that what she’s trying to say? I’m confused.

Okay, Venmo John is killing it this season. Who would have thought a man with a decent job and a 401K would be more of a hot commodity than a former pro athlete? No, seriously. Who.

Meanwhile, Chris and Krystal are heating up. It’s disgusting. He’s like “I really appreciated you having my back when I was trying to dump my side chick. That was hot.” Krystal, is this what you’ve been dreaming about your whole life? Because if so, then I’m so glad you found your knight in shining armor!

Okay, Bibiana is a goddamn therapist at this point. She should honestly be charging by the hour for the amount of time and effort she’s putting into getting these losers to express basic human emotion.

COLTON: So my only choices are to date Tia or go home? Guess I’m going hom—
BIBIANA: B*tch, what did we just talk about?

Damn. Tia really wore Colton down. Colton decides he wants to give their relationship a chance and Tia actually screams in ecstasy. It’s v disturbing.

Also, Tia all you ever wanted was for him to “give it an honest chance.” No, that’s not true. You wanted to bully him into dating you. And it worked. Congratulations, you sociopath. (And can I DM you for tips?)

Moving on to the rose ceremony. I never thought we’d get here. I’m genuinely worried Bibi is going home, though. And what will her cast mates do without her saving their boyfriends in rose ceremonies when they’re mad at them? Hmm?

MY GOD. What is Jordan wearing on his body rn? It’s like a vest/pant combo made out of the vacation section at a Goodwill.

Elsewhere, Caroline has Venmo John cornered on a couch listing off her demands for the rose ceremony.

Then there’s Jubilee, A WAR VETERAN, who’s reduced herself to handing out back rubs for a rose. Is this really a back rub or  is she actually using a tactic they teach in the army to get the enemy to submit? She could have some real tricks hidden under that crop top.

Lol David is over here trying to give Bibi a pep talk. He’s like “Kenny said he’s into you. He said you have a good booty.” What a strong foundation to build a relationship on! It’s worked out so well for the Kardashians.

WHAT. Kenny and Bibi start making out and I AM HERE FOR IT. Never mind that Kenny all of the sudden has half of Paradise vying for his attention. SAVE OUR GIRL, KENNY. I beg of you.

Jackie grabs Kenny next and is like “I hope you’ll still give me a chance now that I just turned 27. I read an article in the New York Times that says I’m past my prime now.”

Um, this man is the father of a 12-year-old college graduate, I’m pretty sure he doesn’t give a sh*t if you’re old enough to pay for your own health insurance now.

Meanwhile, David pulls Jenna aside and gives her a giant-ass stuffed animal for her birthday. Omg. It’s literally a washed-up street dog. What was that, like, the only available thing in the prop room?

Jordan is piiissseddd. He starts dragging the dog down the beach AND THROWS IT INTO THE OCEAN. That is actually so f*cked up. I mean have I done the same thing to my ex-boyfriend’s beloved Kurt Cobain T-shirt after he dumped me in the middle of a beer pong game freshman year? That’s neither here nor there.

Jordan is losing it and starts going OFF on Chelsea and Jubilee. And it’s, like, Jordan, you can’t start yelling insults at women to their faces. This isn’t MTV.

ANNALIESE: I would not be with a man who speaks to me that way. Nope.
JORDAN: Will you accept this rose?
ANNALIESE: Omg I would be honored.
JORDAN: Sike!

Eric confronts Jordan and tells him he needs to apologize to all the ladies or else. Damn. I forgot how attractive Eric is. There’s just something about a man treating women like actual human beings instead of just props for their next Instagram post that’s so… sexy. I guess I’m just a hopeless romantic like that!

Eric is the perfect man. I rest my case.

And on that note, I’m out y’all. I have to go try and not have nightmares about Jordan chasing people in the rain. BYE.