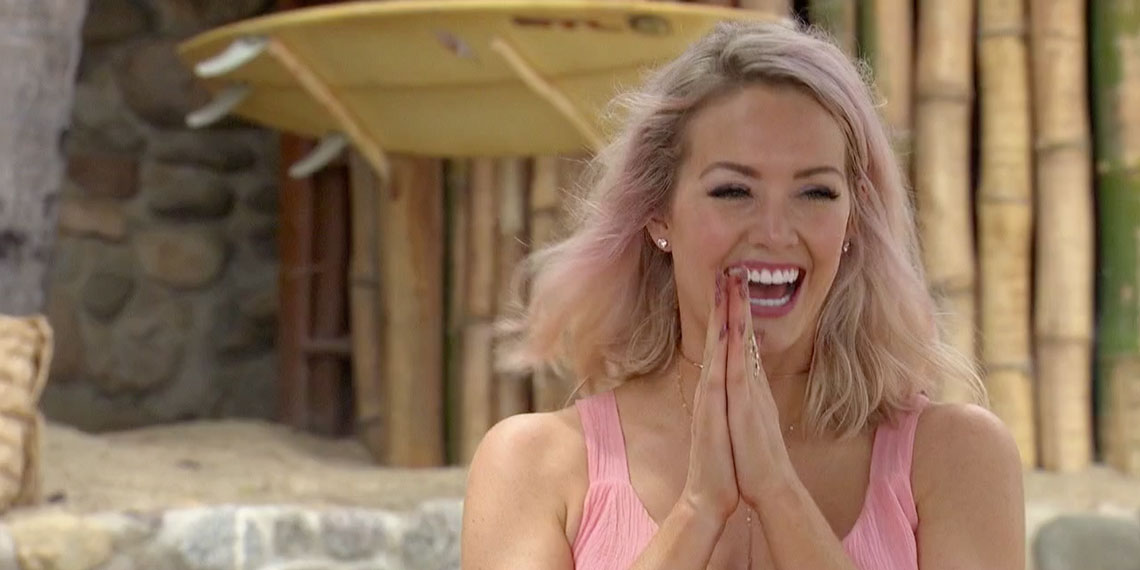 Look, I’m not even going to bother with pleasantries anymore. If you stuck around to watch grown adults guzzle tequila and fornicate on a beach chair for two nights in a row, then, congratulations, you know what it’s like to be held hostage by Mike Fleiss. We all deserve a medal. So, let’s move on, k? Chris Harrison tells us that previously on the Bachelor in Paradise, Colton was “spiraling out of control” at the thought of having to breathe the same air as his ex. Honestly, same, dude.

Becca finds Colton curled in the fetal position, weeping into his biceps. I paraphrase. She probably took one look at that crime scene on the floor and was like “you know, I think I’ll stick with my  fiancé.”

Colton asks why they broke up and it’s like, dude, you know why you broke up. She had to physically leave the room to collect herself when you dropped the V-card bomb on her. Becca’s like “Tia had nothing to do with us breaking up, she just asked me to break up with you and I did.” Lol nice save, Becca.

Okay, this conversation is soooo awkward. Colton is, like, sniffling in the background while Becca tells him how happy and magical her life is. She’s like “if I hadn’t met you then I never would have realized how happy another man could make me. Feel better?” Becca, you’re supposed to be calming him down, not making him more suicidal!

COLTON: I think I’m ready to move on and find love now.
BECCA: Yasss let’s do the damn thing!

LOLOLOLOL. Becca is the best.

Now that Colton says he’s ready to move on, all the guys look genuinely terrified of the competition. Instead of having to compete with a guy who’s constantly crying over his ex, now they have to compete with a football player who’s moved on to the revenge sex portion of the breakup. Good luck, kids!

Lolololol did Annaliese just use the words “respectful” and “Jordan” in the same sentence? Oh poor Annalise, you’re about to get ripped to shreds, honey.

Oh good f*cking God, Jenna is here and I’m not ready. Her energy levels are terrifying. Just watching her makes me want to take a long nap. Sidenote: how do you guys think she was able to smuggle her cocaine through Mexican security?

Things are not looking great for Annaliese. Jenna walks into Paradise and Jordan immediately is like “Annaliese who?”

JORDAN: I’m subscribing to whatever she’s got going on.

Yeah, and whatever drugs she’s got going on too, amiright J?

Jenna asks Jordan on the date. Tbh I’m convinced Jordan is only on this date so he can have some of the drugs Jenna is about to pull out of her vagina.

MY GOD does Jenna ever stop talking? She’s like “I’m so relaxed, I’m so zen right now.” Girl, if this is you totally zenned out, then I’m frightened to see you excited about something.

Jenna and Jordan start making out, and it’s making me p uncomfortable. Why is Jordan nuzzling her face like that? It’s like watching snakes mate or something. What is that??

Meanwhile, back at Mexican home base, Annaliese is talking about how she’s going to walk out of Paradise with a ring on her finger. Yeah, she’s about as likely to get a ring at the end of this as she is to ever get in a bumper car again.

Annaliese is like “I still have hope that we might be okay.” Meanwhile, Jordan is dry humping Jenna behind a palm tree. It’s always nice to have hope, though!

I fancy myself a decent third wheel. #BachelorInParadise

Jordan and Jenna get back from their date, and Jordan actually does the very mature thing of sitting Annaliese down to tell her what’s up. I’m half expecting Paradise to freeze over in protest.

Wait. I spoke too soon. Jordan is being, like, unnecessarily blunt rn. He’s like “I’m really not into you anymore, but have a good summer okay, sweetie?” Way harsh, Tai.

JORDAN: Just know that I’m saving a place for you on my back burner.
ME:

Those are fighting words, Jordan.

How kind of you to offer, Jordan! Jesus Christ, this is so effed up. Paradise is just like the real world. Here we have all these women who are the cream of the crop—mothers, veterans, hot AF Instagram models—and they’re fighting over the scraps these garbage piles masquerading as human men throw them.

LOLOLOL. I can’t believe he just said that he thinks his talk with Annaliese went really good and was “very healthy.”  Like, I haven’t felt that triggered since my boss asked me if I was bringing a date to our company Christmas party.

Jordan starts listing off all the reasons why Jenna is a catch as the camera pans to her passed out on a chaise lounge. Yes, I’m sure your mother will think she’s sweet!

OMG did David just wake her up from her nap? Does he have a death wish? I have cut people for less. Just ask my sister. Okay, why did he make her a cake, though? This all feels very producer concocted.

Jenna tells him she’s looking for a guy who likes to have fun and David’s immediate response is to take his shirt off. At the beach. David, you wild man, you.

Ohhh Yuki. How I’ve missed you. These degenerates are trying to explain to her how football works and she’s like “you play girls, yes?” YES, YUKI.

Just as Annaliese is starting to feel barely emotionally stable enough to not throw herself into the ocean, Caroline “You Know What You Did” Lunny walks in. Yeah, Annaliese is definitely a goner.

Jesus, this girl is talking really fast. Is she also on drugs? Are they all on drugs??

Jordan says Caroline gives him stepmom vibes and I’ve never heard anything so accurate in my life. He’s like “doesn’t she look like the type to show up in your bedroom in a silk robe and try and feel you up while your dad is in the next room?” Um, Jordan. Do you have something to tell us or…??

Caroline picks Venmo John for the date and I’m shocked he’s that hot of a commodity at Paradise. I mean, yes he’s smart and successful, but since when do any of these losers care about that?

Lololol. Caroline seems more in love with these stray cats then the genuine guy with a stable income sitting in right in front of her, but that feels about right.

YESSS. JUBILEE IS BACK. Fun fact: Jubilee “I didn’t fight for my country to compete with 20 other women for Ben Higgin’s attention” Sharpe is my absolute favorite in the Bachelor franchise. Let’s never forget that one time she called Ben out for telling every woman on his season with a pulse that he was falling for her. Iconic.

Jubilee pulls Kevin first and he’s like “I can’t go on a date because last night I banged Astrid.” Wowowowowow. That was so casual. DID YOU HEAR THAT ASHLEY I, DID YOU?! Well, at least he’s honest!

Jubilee asks Venmo John on the date as another woman is wrapped around his body. Damn, that’s bold. They go ziplining and then do lunch in the jungle.

Okay, John you “don’t like to bring it up” that you invented the app for Venmo? Cause you brought it up to Jubilee within five minutes of meeting her, sooooooo.

VENMO JOHN: I’m just a programmer! There’s nothing special about me and all the money I make.
JUBILEE:

Okay, they are vibing rn. They’re actually talking about real-ass things, while all he did with Caroline was dance on an abandoned street with her and pet a kitty. Pun intended. She looks like the type.

Back at the beach, Kenny makes a picnic for him and Krystal and it’s so stinkin cute. He literally drew a heart in the sand around their towel. Kenny’s like “I see a future with you after this, I want to be with you.” To which Krystal replies: “Aww, thank you for sharing.”

AWW, THANK YOU FOR SHARING. *throws laptop at wall* Goddamnit, Krystal! You gotta turn down the last good man on this island? Really?

God, I hate Chris so much. I want someone to drown him in the pool. Tia’s like “he’s so sweet, he’s saying everything I want to hear.” Duh! Of course he is! He literally knows the exact script to follow to keep you around!

I love that Eric and Kenny are referring to the other contestants as rats with cheese. Not as good as Daniel’s iconic washed-up street dogs comment, but I’ll take it.

HOLY SH*T. Krystal is stealing Tia’s man right out from under her. And Chris is just letting it happen! Literally seconds after Tia DTR’s with Chris, Krystal starts sucking face with him. He’s like “you want to make out because I’m definitely single.” What a guy.

Soooo it’s not cool when Colton tries to “have his cake and eat it too” but when you want to do it, Chris, it’s “fighting for her” but “exploring your options”? Kkkkkkkkkk.

Cut to Tia the next morning bragging to anyone who will listen that she and Chris are soooo in love. Girlfriend, you should know better than to trust anyone on that godforsaken island!

Meanwhile, Chris is swinging his d*ck around at the breakfast table. I’m seriously going to vomit listening to this misogynistic bullsht. He’s like “today the goose is flying high.” He says this with all the confidence of someone who has never been told what a dipsh*t he looks like wearing that Mr. Miyagi headband.

WHAT. Colton is going to tell Tia about the Chris/Krystal thing?? I would not want to be the messenger of that bad news.

Did Chris just say he wants to go on multiple dates tonight before the rose ceremony? VOM. And Jordan is just egging him on by comparing living, breathing women to food courses in a meal. *takes slow, calming breaths* Are you there, God? It’s me, It’s Britney, Betch. Is it time to smite down all the men yet? I have compelling evidence this time!

JORDAN: You’re a delicacy here. Anyone you sit down with tn is going to want your rose.

Ohhh IDK about that, Jordan. I think some of these girls would rather light themselves on fire then be compared to carrot cake in a sexual way. Just saying.

The episode ends with Tia confronting Chris. If she’s anything like her pal Raven, then I hope she beats him to death with her shoe. I’m rooting for you, T!