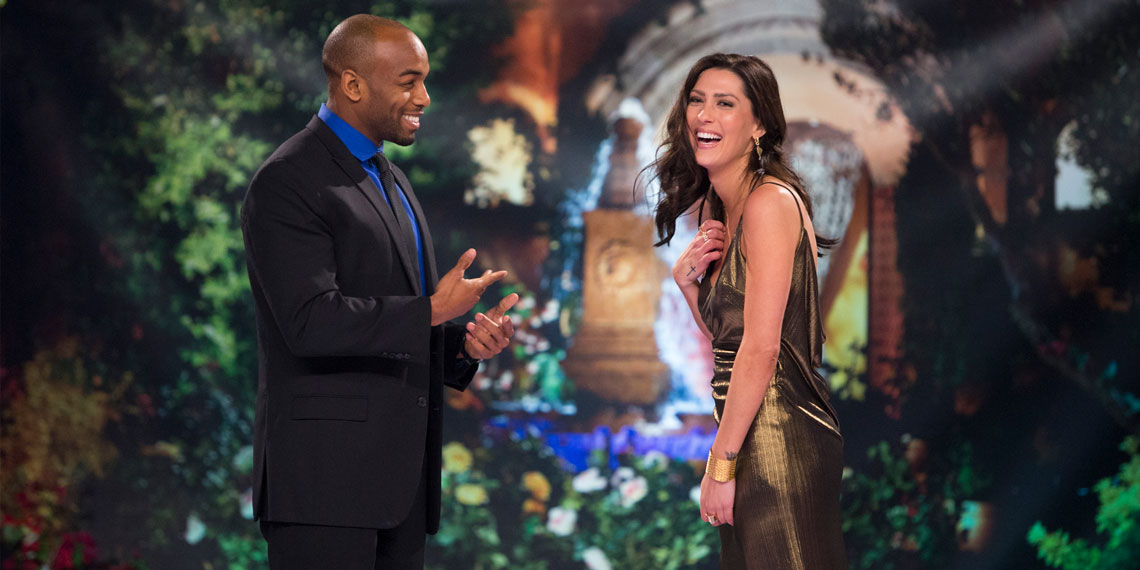 EXCLUSIVE: A Former ‘Bachelorette’ Contestant Reveals What You Didn’t See On The Premiere

There’s, obviously, a lot you don’t see on The Bachelorette. That’s why we chatted with Darius Feaster, former Bachelorette contestant, about his feelings on the premiere and everything you didn’t get to see—including the intense application process and what goes on behind the scenes.

How did you end up on The Bachelorette?
Do you want the long version or the short version?

Last year in February I went out to a brewery. I noticed this girl kept looking at me. And you know when you get that awkward eye where it’s like, “I notice you noticing me, but I don’t want you to notice that I’m noticing you, but I’ll put you on notice anyway that I notice you back and we should have some notice together” type deal?

Either way, she finally comes up and says, “Hey are you single? Are you by yourself? Are you looking for anybody?” And I said, “yeah” and she said, “do you mind if I ask you a few questions?” At this point I’m like, “is this the FBI or something like that?” Like, what’s going on here?

So she says, “I’m a casting agent for The Bachelor/The Bachelorette“… She immediately begins asking me about my personal life, what do I do for fun, what I do for work, how old I am, and asked if I’ve ever been on TV or wanted to. I told her I really only came to work. And she said, “Well you seem pretty cool, would you mind answering a few questions that I email to you?”

After answering all 35 questions she emailed over, she called me back and said, “We really liked your responses, do you mind coming in for a face-to-face interview with some of the producers?” I end up meeting some producers; they ask me some questions and essentially ask if I can commit to doing this. At the time I was transitioning to a new job. I told my new manager about my situation and she said, “Do you want the job or do you want to go on TV? You can choose, but you can’t do both—you’re not gonna be able to come back to us.”

So I was in a squeeze and thought to myself, “While it’s a once-in-a-lifetime opportunity, so is this new job. Plus LA’s not cheap. Rent is going to be due regardless.” So I was like, “Sorry guys I can’t do the show, unfortunately I care about my career.” And the agent I was working with was like, “I’m so sorry, how about this: We’ll make sure we call you next year and keep you in our database.”

A year goes by and I get a phone call telling me that I have been laid off. Two or three hours later (same day), I get a call from that same casting agent from last year—she asked me if I was available this time around, and I told her absolutely.

So she was like, “Ok, we wanna bring you in for the final final round.” They do the final round at a hotel right outside the airport, where they bring in about 50 guys and take you through psychological tests, blood and urine (STD tests/physicals), all types of stuff. Background check, an actual psychologist, a private investigator—it was crazy. The P.I. was asking me about my friends’ histories based on pictures from social media. She pulled up this picture on Facebook and she was like, “Tell me about this picture of you and XYZ, what were you guys doing in that photo?” They try to dig up dirt and see who your friends are and if there is any suspicion having bad relationships with women—things of that sort. They definitely take it very seriously as far as trying to get to know who you are.

Speaking of digging up dirt, it’s come out recently that Garrett has liked transphobic, homophobic, and other problematic memes on Instagram. So it’s interesting that you say they hire P.I.s to dig into people’s social media—do you think production knew about the memes?

Whether they’re specifically watching or not, once it hits the internet, once it hits social media, people know. So in regards to this situation with Garrett, I don’t really know. It didn’t seem like he had any of those types of issues, but what he likes on Instagram is what he likes on Instagram. I can’t really speak towards that. That was not something that was expected—but shoot, if he does that, he has to live with it, not me.

On the topic of social media, people have been going crazy for Joe the grocery store owner.

Joe’s the man. I like Joe. I feel like in general there’s a lot of good guys. At the end of the show I said that, and I genuinely meant it—she is in good hands, there’s a lot of good guys on the show. Joe is definitely one of them; unfortunately, he and I were riding the same bus out of the mansion together. But hey, it is what it is. It was a long night and she had to make tough decisions, and unfortunately, I was not part of that final selection. But yeah, Joe’s a good dude. I’m sure Joe will have no problem finding some new employees for his grocery store—especially of the female variety.

One thing that’s always interested me about The Bachelorette is the introductions. Did you get to plan your own introduction? How do they decide who gets a big-budget opening and who has to just try their best pun?

I would say that everybody has their own relationships with the producers… So you can suggest like, “hey I wanna ride in on a magic carpet like Aladdin.” You can do what you wanna do, but it has to be approved by the producers. If it’s something they want to do, they’ll allow it to go through, and if it’s something they don’t want for you and for your story . That has a lot to do with the producers and how they want to portray who you are. But I just came in the standard limo. I had some bold ideas, but they didn’t like them, so it’s fine.

What else didn’t they show from you?

Although it wasn’t aired, just like my entrance out of the limo, or the four or five interviews I had throughout the night, or any of the dozens of conversations with the guys, or the interview after I was eliminated, I did have a chance to get one-on-one time with Becca. There were about seven or eight guys that didn’t get a chance to speak with her at all. The fact that some of them received a rose at the end of the night was HIGHLY questionable, but anyway…

For my one-on-one time, I thought that because she had a background in writing, as did I, I would write her a poem—nothing corny, or too serious, but I just choose a commonality we shared. I didn’t want to talk about anything too surface-level (being an athlete like everyone else, loving my family, volunteer work, both being from Minnesota, etc.).

I pulled her aside and told her I wrote her a poem the night before because I wanted to be sure that I communicated with her what was on my mind/my heart going into this whole process. So I read the poem to her (no stuttering—smooth delivery, by the way). She oooh’d and awww’d, said she really like it and that it was sweet. She asked to keep it; I told her to hold me to the words I wrote on the paper. Then we talked a little more and my turn was up. I walked away hoping that was good enough to at least get a sympathy rose, but apparently… nah!

I imagine filming takes forever. What were you guys doing for all that time?

It was the longest night of my life. It was aggressive. It was almost like prom night all over again, it was one of them all-nighters. It was crazy. We come in through the limos at night, it’s around 11pm, midnight, something like that. Then they introduce everybody. Then when everybody’s all in the house they get their one-on-one time with Becca. In the meantime, it’s what you see on TV—guys fraternizing, talking, having a few drinks and kicking it.

But yes, it is a long night. Everybody does get tired, and you probably don’t notice it in the rose ceremony because everybody’s heart is racing and everybody’s got a ton of adrenaline, but everybody passes out after that. I was so tired after that ceremony, it was ridiculous. I slept until like 3 or 4 in the afternoon. So yeah, it’s tough.

What did you make of the whole Chase/Chris text message thing?

You can take that situation itself and kind of extrapolate it to what the show is about, in my mind. Like, I feel like they look for drama. This is in my opinion, so take it for what it’s worth, but I think that they try to stir up the pot and make more drama than there really is. That’s what reality TV is in general. And they encourage that kind of stuff. That’s what they feed off of, that’s what America feeds off of. So when you give them… that information and they can spread it and flip it and twist it, they’re going to capitalize on it.

I had heard what happened, before, like while we were in the mansion, it came up in conversation when I was talking to Chase. But I didn’t think anything of it, I didn’t think they would spend 10 minutes of the show going through that—but you know, that’s what they want.

Even as a viewer it seemed like they were reaching.

Yeah, it seemed like a reach. Especially for the first night. I don’t know, like if there was some actual drama that happened between those two, that would be one thing, but a text message that nobody even knows what happened on the text? That just seems like definitely a reach for attention.

It could have been a lot worse, though. Last season someone’s ex showed up at a date to confront him.

I feel like they almost encourage that kind of stuff. I feel like there’s an environment for drama that’s sometimes unnecessary. Not even sometimes—it’s 100% unnecessary. In general, I feel like I’m not that dramatic of a person. I do a lot of fun things, I’m a good time, I’m a pretty real person, and (this is all my opinion) I think part of the reason I didn’t stay on the show longer is because I didn’t cause enough drama. And knowing that, if I had to do this all over again, I’d probably do something reckless. I’d probably jump in the pool or something.

Especially with The Bachelor, the fame that you get is so short-lived that for someone who wants a job again, you don’t want to be known as that person who did something crazy.

Exactly. You don’t want to embarrass yourself. Some people are more willing to take that kind of risk and flirt with the drama, and I’m maybe I’m just one of those people that’s more risk averse. I’m not trying to destroy my reputation just to get some fame or some likes on Instagram. I don’t care about that.

Do you think you’d do reality TV again or Bachelor in Paradise?