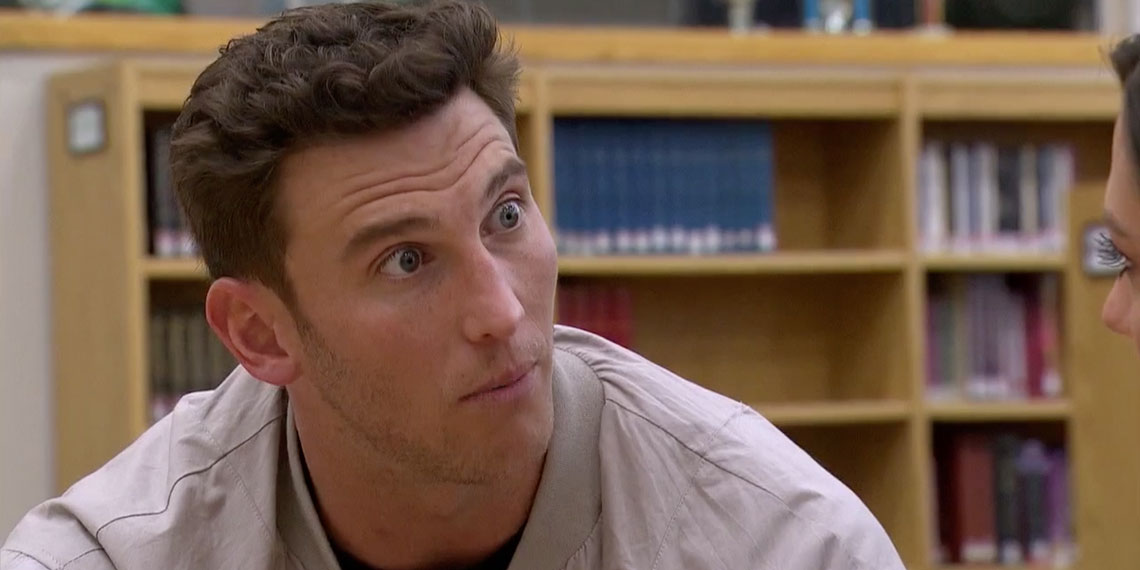 Welcome to Hometowns, people! For those of you who are unfamiliar, this is the episode of The Bachelorette where we get to see where these piles of flaming garbage masquerading as human men came from. It’s also the episode where Becca can decide which mother-in-law she wants to trash-talk behind her back for the rest of her life. Sounds delightful. Shall we get to the good stuff, then?

I guess we’re not playing around this episode, because ABC immediately starts things off with Garrett’s hometown. Small mercies. First of all, I am ALARMED by the way he just ran out of those trees. Like, what are these hand gestures I’m looking at rn?

Garrett wants Becca to get a real understanding of his roots and where he comes from, so he asks her to ride on the back of his tractor, and I wish I was even a little bit making this up. Garrett’s like, “can you see yourself doing this after the show?” And it’s like, please stop pretending like you will be doing anything other than pimping laxative tea on Instagram after this show.

Sowing the seeds of love! #TheBachelorette

And let’s be real, we all know Carlos never really lets you drive the tractor unless you’ve been extra good!

GARRETT: Bringing you home is a big deal because the last person I brought home was my wife.

^^^THINGS YOUR BOYFRIEND SHOULD NEVER SAY.

Okay, is it just me or do Becca and Garrett’s sister look eerily similar? Like they could pull off the twin twist better than Spencer Hastings did doubling as herself in the PLL series finale? Also, Becca keeps saying that Garrett reminds her of her dad and now Garrett’s sister could literally be Becca’s body double. This is getting way too incestuous for me. I’m out.

Okay, I’m surprised I like any of Garrett’s family members, but Barbara is real AF.

BARBARA: Becca I don’t know what he’s told you about his past relationship…
BECCA: Oh, he’s told me everything. Like, e-v-e-r-y-t-h-i-n-g.
BARBARA:

Lol Becca just said that her and Garrett share a “special bond” because they’re the only ones on the show who’ve been engaged/married in the past. K. I didn’t know that spitting on the sanctity of marriage qualified a person to be your soulmate these days but, like, to each their own.

The rest of this hometown is boring AF. With Garrett being a hateful meme liker, I thought we’d get to see at least one MAGA hat for Becca to lose her sh*t over. But alas, it looks like Becca will have to find out his true colors in 3-6 months after she’s invested her time, hopes, dreams, and at least 6 Instagram photos to him just like the rest of us plebes.

Seriously though, Becca is looking at Garrett like he could say that the Parkland survivors are crisis actors and she’d still want to bang him. Oh wait…

Jason whisks Becca off to the sexy and exotic Buffalo, NY! Becca, you lucky b*tch! If you’ll recall, this is the nightmare Hometown date we wrote about weeks ago so my bar for this date is set somewhere around “will call the police if Becca blinks twice.”

Jason, aka the guy who is reluctant to tell this virtual stranger Becca that he’s falling for her, decides to show her how much he cares about her through a wings eating contest! A WINGS EATING CONTEST. Becca, blink once if you want to stay, twice if you need me to DM Chris Harrison and get you tf out of there.

But seriously though, a wings eating contest?? First of all, the only time I would ever participate in such a thing is  under EXTREME duress. You sure as sh*t wouldn’t catch me on live freaking television participating in this form of cruel and unusual punishment. Second of all, there’s nothing sexy about getting a chicken bone heimliched out of your windpipe. NOTHING.

Becca’s like “every time I’m with him I have the best time!” Yes, the best time and probably a newly developed case of IBS.

For the next part of their date Jason takes Becca to an abandoned ice skating rink. I’m sorry, but Jason, are you trying to make this girl your fiancé or get to third with her under the bleachers after study hall lets out? I’m genuinely worried it might be the latter.

Okay, Jason’s family seems very normal and well-adjusted. Booooo. I’m sure if Becca picks him they’ll have a fun life getting happy hour in midtown and having missionary sex with the lights turned off. But, you know, eternal happiness to you both!

Blake starts off his hometown by immediately reliving his glory days at the high school. Jesus Christ. There’s always one. I guess nothing turns a girl on like sticky floors and the smell of puberty, amiright Blake?

Wait did he really just say “high school is a big part of my life?” RED FLAG. Becca, slowly back away and get back in the car while there’s still time.

Blake goes into a very sad story about a school shooting, which is horrifying. Between this and his mom sleeping with the coach, I really get why they say high school is the best four years of your life.

BLAKE: But don’t worry I have some really great memories from high school too! I love high school!
ALSO BLAKE:

Blake says he has one more surprise for Becca, and I’m slightly worried this means he’s going to take her to the cafeteria and pull out his yearbook so they can over-analyze why so many people wrote “HAGS” in it.

He doesn’t do the cafeteria thing, but he does lead Becca to some sort of talent show competition taking place in the gymnasium. I’m referring to it as a talent show because I genuinely do not know who this Betty person is and there does not appear to be one single adult in this crowd other than Becca and Blake.

So do they just have a de-briefing session to teach Becca the words to every no-name artist they bring through here? #TheBachelorette

They start making out amidst a mosh pit of teenagers, and I bet Blake really feels like the big man on campus now.

Cut to the part where Becca meets his family. Do we think the homewrecking coach will be allowed to sit at the dinner table? Or will his dad just make passive-aggressive comments about him in between making small talk with Becca? *turns up the volume*

Okay, I hope after that conversation with Blake’s mom Becca effing RUNS back to the Bachelor mansion. She’s like “after the breakup I had to comfort him, you know?”

ALSO BLAKE’S MOM: I was there with him through every tear. All the times he cried and and the screamed in the night.
ME:

Colton’s hometown is the last one, which means his family is probably batsh*t. I can’t wait for Colton to tearfully admit he’s a virgin and for his dad to laugh in his face.

Becca’s keeps saying that they have this “crazy connection” but I’m pretty sure by “connection” she means that their chemistry is 100 percent fueled by the fact that he’s seen her friend naked. Ah, romance.

Colton takes Becca to the children’s hospital so ABC can exploit sick children for ratings. I would be outraged, but these kids are so freaking cute. I can’t. Seriously, this little girl and her tiny cowboy boots are stars in the making and she’s too pure for the trash I let pollute my television screen.

Okay, WHAT is Colton’s mom wearing?? I guess she took a page out of Becca’s style handbook because she showed up to tonight’s dinner wearing a shirt with paper clips holding it together as her national TV debut. This is maybe the most offensive thing I’ve seen all season, and I’ve seen Becca show up to a date in a bedazzled zebra print dress.

Colton tells his mom he’s a virgin and she looks just as doubtful about his virginity claims as I do.

Becca and the mom have some girl talk next, and I love that Becca is discussing her son’s sex life right to her face. She’s like, “I’m concerned about his intimacy with women, you know?”

ALSO BECCA: Do you think he’ll be good in bed tho?

Colton drops the “L” word on Becca right before she leaves and she looks smitten. Just like a virgin to play those mind games right before the fantasy suite. Bravo.

Becca claims she needs to talk things out with her girls before the rose ceremony, because these are the people that know her best. And by “best” she means “contractually obligated by ABC to be there.” Obviously.

Okay, Becca is really laying it on thick with the men here. I feel like there were multiple times throughout the season when she looked like she might quit because all the men were garbage and now she’s making it sound like she’s got the cream of the crop.

LOL. Tia is listening to all of this like, “It was supposed to BE ME!”

Oh my goddddd Tia is such a b*tch. She’s like “I know I said I was over Colton but that’s when I thought I was the only girl he played just the tip with.”

TIA: As your friend I want you to know that I’m into the guys you’re into and don’t want you to be with them.
ALSO TIA:

Okay, Becca, this girl is not your friend. She strategically waited until the last second to tell you she was into Colton. Revenge bang him PLEASE. I beg of you.

Speaking of Colton, wtf is this pep talk he’s trying to get from Chris Harrison rn? He’s like “so what exactly happens in the fantasy suite?? Because I’m nervous.”

ALSO CHRIS HARRISON: Are you asking me how to put it in? I don’t understand where this is going, son…

Damnnnn I can’t believe Becca actually cut Colton because Tia told her to!! I mean, I knew she was going to have regrets after this season, but letting little Miss Wiener, Arkansas manipulate her out of a boyfriend is a wholeeee other story.

Lol I love that Colton’s limo exit strategy is the same as mine when a racist family member gets weird at Thanksgiving: pretend to fall asleep.

Next week, Becca and the three human stock photos she’s dating are headed to Thailand! Now that the virgin is gone, I fear I’ll have to go back to mocking the sequined abominations Becca tries to pass off as fashion. I guess only time will tell!