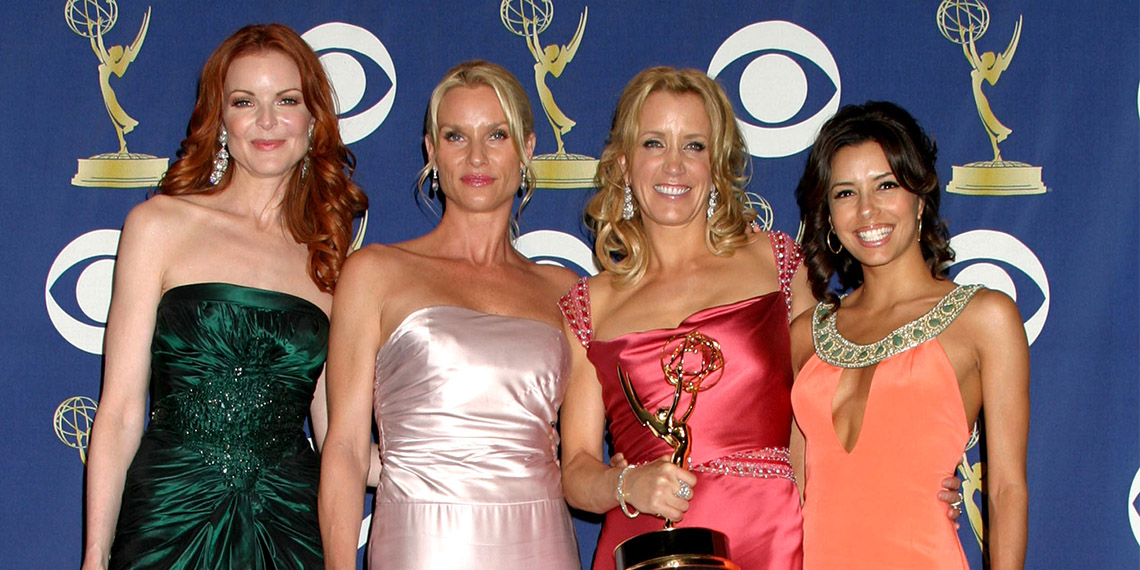 Obviously we aren’t watching TV shows for their accuracy, right? Even reality shows are completely absurd. I’m sorry, but am I really expected to believe that 25 women are all truly enthused to make out with the same clown for three months and actually be in love and get engaged at the end of it? They don’t even know who the Bachelor will be when they sign up to be on the show, for f*ck’s sake! I digress. My point is that television shows are supposed to be a pleasant escape from our own hellish lives, which I appreciate—especially right now. However, some shows completely miss so many cues from real life that I can’t help but wonder how these writers managed to keep their jobs. I’m talking specifically about Desperate Housewives, a show from the early 2000s that I’m rewatching because I just got a Hulu account and all of the seasons just so happen to be available.

It’s one of those shows whose first two or three seasons are absolute fire, but then it goes downhill really fast. However, I’m so far in that I feel like I can’t stop. As Jack Twist would say, “I wish I knew how to quit you!” One of the funniest things of Desperate Housewives, aside from the fact that there is as much murder as there is on The Sopranos, is that it’s just so painfully unrealistic for very specific reasons. And I don’t mean the obvious, like how none of the legit plot points would ever happen IRL. Here are some petty things that have been bothering me about this show.

All of the Housewives are guilty of aggressively short sex sessions, not just Bree and Gabby. Edie, who is perhaps the most experienced in the bedroom, also starts moaning and screaming within seconds of mounting her latest victim. Why, ABC, why?

As described by Rotten Tomatoes, DH is as follows: “Behind the facade of a postcard-perfect subdivision live four women whose lives are anything but idyllic.” In other words, a lot of f*cked up sh*t happens to this group of seemingly normal women. To be honest, that’s a great plot and leaves a lot of room for some crazy things to happen. I’m in. However, a lot of legit traumatizing events happen to these women who literally do not react at all to said trauma. They kind of just carry on living their suburban lives as if everything is fine. For instance, remember when Susan’s husband was in not one, but three massive car accidents? The first landed him in a coma, the second killed a young mother and her child, and the third was the work of Major Creep Dave Williams. Why do the women not talk about this literally all the time? I got in a fender bender when I was 18 and still have nightmares about it.

Susan isn’t the only one who brushes death under the rug! Let us not forget when Bree’s psycho boyfriend faked his suicide because he expected her to come to his rescue, but instead she just sat there and let him die. Also, remember when her son was in a little hit-and-run that killed Gabby’s mother-in-law? Of course, we can’t forget about that time when she found a bag of her husband’s mistress’s teeth in his ex-wife’s pantry! Ah, just fun, suburban things!

Having Kids Is NBD

If I had a kid, I would turn into Rachel Green in the episode of Friends where she calls her pediatrician every time the baby does anything aside from sleep. The ladies of Wisteria Lane, however, have kids and then just kind of go back to accidentally shooting people (classic Susan!), going to fancy soirees at their country clubs, and plotting against the new neighbor. Guys, no! I know this absurd show isn’t meant to be a really accurate portrayal of the harsh realities of parenting, but come on! They seem to be pregnant for years at a time and then once they pop out the kid, we never see it!

Their lives don’t really seem to change after having children, and we never really see them taking care of said children. Yes, the kiddos are in a scene here and there, but they’re never having a good ol’ family meal, doing their homework or really anything with their parents. Are these kids just really self-sufficient in the face of absentee parenting?

I respect Lizzie McGuire for boldly repeating her middle school graduation outfit, because that is what people do: they buy a shirt knowing that they will wear it more than once. Like, I have a Rent the Runway membership, which essentially means I never have to wear the same thing twice, but I still rewear outfits. That is like, the point? The Desperate Housewives’ clothes are pretty normal, so I’m confused as to why they can’t wear them more than once. Is there something so offensive about Bree donning her magenta sweater set in more than one episode?

Also, Susan is low-key a lingerie queen and she never wears the same bustier twice. I don’t understand this! Lingerie is f*cking expensive and her whole identifier, aside from being a total f*cking idiot, is that she’s broke, so how is she affording all of the matching sets she breaks out literally every time she has sex? I have one piece of lingerie that I purchased at a La Perla sample sale and have lost count of how many times I’ve worn it. That’s normal!

Their Makeup Is Always On Point

Sex and the City is in my top three least relatable shows, but I found myself actually clapping at my tv during a specific Carrie moment that was the truest scene in the whole show. She’s standing over Big in one of her weird little crop top outfits and says, “I don’t wake up looking like this. I actually need stuff to look like this.” Girl, preach. The women in Desperate Housewives, on the other hand, wake up after what I can only imagine was a nine-hour snooze fest with perfectly rouged cheeks, long lashes, and a glossy lip. Wrong! Are they Mrs. Maisel-ing themselves and secretly waking up at an obscene hour to do their faces, so they wake up looking pretty for bae? How is this happening?

There you have it, the most annoying aspects of one of the best shows on television. Even though I love to sh*t on these women, I really do love them. Did I miss anything?