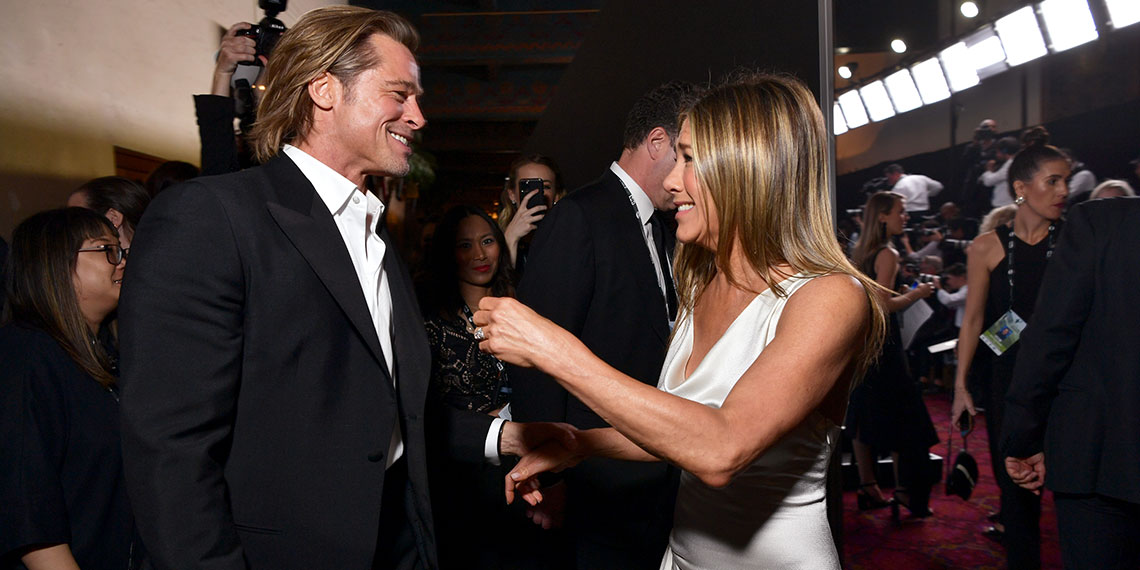 2020 obviously sucked, ruining travel plans, weddings, fitness goals, dating, my New Year’s resolution to “stop watching so much TV”… so, basically everything. Thankfully, the only things that 2020 didn’t rob us of were some decent pop culture moments.

For a pop culture junkie like me, moments like J.Lo and Shakira’s Super Bowl performance and Taylor Swift dropping folklore are literally what kept me going. And besides the pure entertainment value, these pop culture moments let me forget how annoying 2020 was, how bad I am at TikTok, and how I was about to re-watch Gossip Girl for the 17th time.

So in a year where almost everything’s been sh*tty, I’ve done something nice for you: I’ve rounded up the best, most memorable pop culture moments from this year, so we can reminisce on the few good things that 2020 gave us.

Brad & Jen At The SAG Awards

2020 gave us plenty of reunions: the Lizzie McGuire and Community cast Zoom calls, Khloé and Tristain getting back together… and most importantly, Jen and Brad at the 2020 SAG Awards. The former couple reunited backstage at the event, where they were captured laughing, touching arms, and clearly enjoying the catch-up. The real hero? Whatever camera man or woman snapped that photo of Brad holding Jen’s arm. I plead the fifth on whether it’s my phone screensaver or not…

Matt James Being Named The Bachelor

Matt James was announced as the first Black Bachelor in the show’s history, and it was about f*cking time. NGL, after hearing Matt would star in the upcoming season, I may have—okay, definitely—applied. And although I shockingly didn’t get cast, the next best thing will be to count down the days until 2020 is over, because we know starting early January that we’ll get to snuggle up under a weighted blanket and watch Matt James grace our screens for two hours every Monday night. Can 2021 come any faster, please??

Paris Hilton’s ‘This Is Paris’

As much as Paris Hilton never became irrelevant, for the past few years I feel like we haven’t seen much of her beyond the occasional Simple Life rerun. With her documentary This is Paris, we were given the deepest dive into Paris’s childhood, relationships, and work life like we’d ever seen. For a minute there, Paris was getting so much press it felt like the 2000s again. The only way Paris could top her 2020 resurgence is by making a 2021 RHOBH cameo with her newly-cast mother, Kathy Hilton (which I’m praying for, hard).

Early on in quarantine I decided the best use of my brain cells was to watch anything and everything on TV. One of those shows ended up being Schitt’s Creek, and I thank the Canadian Gods (or like, Eugene and Dan Levy) every day for writing and producing a show that birthed my new fictional BFF: David Rose. And besides getting praise from me, Schitt’s Creek was applauded on a larger scale when it made history by winning nine Emmys, the most any comedy has ever won to date.

I thought 2020 was going to be the weirdest thing about 2020, but Elon Musk and Grimes took that crown when they announced their baby’s name as “X Æ A-12”. They did end up changing their child’s name a month later to “X Æ A-Xii” (WAY more normal, right?), which led to speculation that the original name violated regulations in the state of California for having numerals in it. Either way, that child is going to spend at least a third of their life correcting substitute teachers during roll call.

Most people remember where they were, what they were doing, and what they were wearing during big pop culture moments, like when Michael Jackson passed away, or when Lady Gaga wore a meat dress to the 2010 VMAs. For me, that special etched-in-my-memory-forever moment is when Taylor announced the release of folklore, and then again when she dropped Evermore. I know Taylor won a People’s Choice Award in November, but can someone also give her a ribbon for being the most productive person ever during quarantine??

Typically, the only reason I “watch” the Super Bowl is for the excuse to eat a plate (okay, plates) of nachos and jalapeño poppers guilt-free. This year, however, we were blessed with a whole new reason to enjoy football: Shakira and J.Lo slaying the halftime show with performances that I’m pretty sure made even Beyoncé shake. Given that this performance took place in February right before everything went to absolute sh*t, I’m personally thanking my lucky stars that one of the last major pop culture moments before lockdown was one that featured two female icons who proved they are as entertaining (and beautiful) now as they were 15 years ago.

It’s like the universe was sending us a sign that 2020 was going to be a wild ride by making the first major headline something that shook the entire world: Meghan and Harry’s decision to step back from the Royal Family. In January, the couple stated that they would be splitting their time between the UK and North America and would be financially independent. And here I was, thinking that the biggest exit Meghan would take in her life was from Suits… who knew??

Tell me you didn’t freak the f*ck out when you heard Jessica Simpson was releasing her memoir, and that it included deets about her and John Mayer’s relationship. And this tell-all did more than just out John as a stage-five clinger: it gave us insight into everything from her sobriety journey, to her surprisingly still successful business, to the inside scoop on her marriage to Nick Lachey. The best part of the memoir? The nostalgia it brought up about Jessica’s iconic shoe line.

Gigi Hadid wasn’t the only A-list celeb to give birth during the COVID-19 times, but her pregnancy was arguably the most exciting based on the fact that she pulled a Kylie Jenner (until Mohamed Hadid inadvertently outed her and Zayn, that is). It made space for fans and the internet to speculate, investigate, and become detectives as they tried to figure out if she was expecting, when the baby was due, and who the father was. Truly, the perfect distraction we all needed in 2020.

Finding Out Vera Wang Is 70

Remember when the internet broke in May when we found out Vera Wang has flawless skin and abs at… 70? WTF! I’m pretty sure I would need, like, 20 hours of glam, a professional photographer, and Facetune to look even half as good as she did without makeup, just lounging around the house taking self-timer photos.