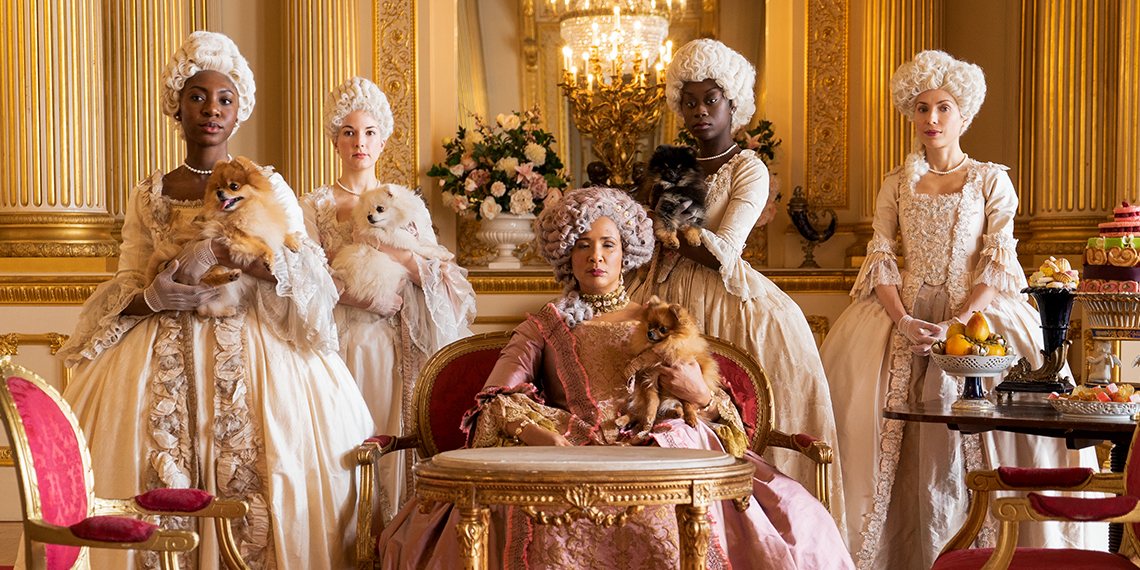 10 New TV Shows To Save You From Boredom This Winter

Back in March, who could have predicted that basically nothing would change by the end of 2020? Okay, a few things have changed, but assuming you’re not one of the lucky few who have already gotten their hands on the vaccine, your ass is still glued to the couch, and you’re still f*cking bored. Luckily, the TV gods understand our need for constant stimulation, so there’s plenty of good stuff coming to a device near you in the next few weeks. Here are the most important new shows and seasons coming soon that you won’t want to miss.

Back in 2017, Shonda Rhimes made history with a record-breaking deal to set up shop at Netflix. It’s taken a few years, but we’re finally getting our first Shondaland Netflix show, and Bridgerton looks like the exact kind of thing I want to binge in 1-2 sittings. Based on a series of novels set in 19th century England, this soapy drama centers on two young nobles who pretend to be in love, each with their own motives. With a diverse cast, gorgeous visuals, and Julie Andrews as the narrator, this is the event of the TV season.

If you’re still watching Netflix’s Chilling Adventures of Sabrina, congratulations, you’ve made it to the end. The fourth and final part drops on New Year’s Eve, and as always, it looks creepy and thrilling. But the most exciting part, by far, is the news that the OG Aunt Hilda and Aunt Zelda from Sabrina The Teenage Witch will be making an appearance. Idk how this factors into the plot, but my sense of nostalgia is happy.

The last time I was indoors at a bar was a viewing party for RuPaul’s Drag Race season 12, so the fact that we’re already getting a new season puts into perspective how long this year has felt. Season 13 features 13 new queens, and whether you’re a Drag Race super fan or have yet to watch an episode, trust me, you’ll love it. From the runway looks to the hilarious challenges to the SHAAAAADE that the queens throw at each other, Drag Race is the perfect competition show.

I don’t think The Bachelor needs much introduction around here, but I keep forgetting that Matt’s season premieres just two weeks after The Bachelorette wraps up. Filmed in a quarantine bubble in Pennsylvania, this season is sure to be (say it with me) the most dramatic season ever, and judging from the contestant bios, we might have more than one woman trying to secure the villain spot.

I couldn’t talk about The Bachelor without also including a Bravo show, and the Dallas housewives are back in January for their fifth season. This season was filmed during the pandemic, so we’ll see how the ladies incorporate face masks and shields into their glam routines. Mainly, I’m curious to see how the cast fares in the aftermath of LeeAnne Locken’s problematic behavior and subsequent firing, because that sh*t was messy. Judging from the trailer, newcomer Dr. Tiffany Moon seems like a promising addition, and the ladies of Dallas are often underrated.

With so many streaming services available, a lot of people sleep on Apple TV+, but Dickinson, one of their breakout original shows, is already coming back for a second season. Hailee Steinfeld plays a young Emily Dickinson who’s struggling with the confines of her 1800s New England life. With modern music and dialogue, this show is super fun, and I found myself laughing out loud regularly during the first season.

James Lafferty and Stephen Colletti (aka Nathan and Chase from One Tree Hill) teamed up to create and star in this comedy about two actors who are trying to figure out wtf to do years after starring in a hit TV show about vampires. So One Tree Hill wasn’t about vampires, but I’m pretty sure this is low-key autobiographical. Also, yes, this is the same Stephen Colletti from Laguna Beach, which is reason enough to watch.

After moving to HBO Max last spring for its third season, Search Party is already back for season four. Going forward, I would appreciate if all of my favorite shows could start putting out new seasons every eight months or so. Dory, Drew, and the gang are still dealing with the aftermath of Keith’s death, and if you know anything about this show, things probably won’t go according to plan. Can’t wait!

When Disney+ launched, one of the main draws of the streaming service was the promise of new shows in the Marvel Cinematic Universe. It took a while, but the first one is finally here, and WandaVision looks like  it’s going to be a f*cking trip. Wanda and Vision, two of the more under-used characters from the MCU movies, are the perfect TV couple in this supernatural sitcom through the ages. Tbh, I have very little idea what this is actually about, but it’s going to be a big deal.

Along with Dickinson, Apple TV’s Servant is also returning for a second season next month. This psychological horror show is produced by horror icon M. Night Shyamalan, and it follows a family who hire a nanny for their child… who is actually a doll. Sh*t gets weird, obviously. Season one got solid reviews, and Rupert Grint (Ron Weasley) is in this, which is reason enough to watch.