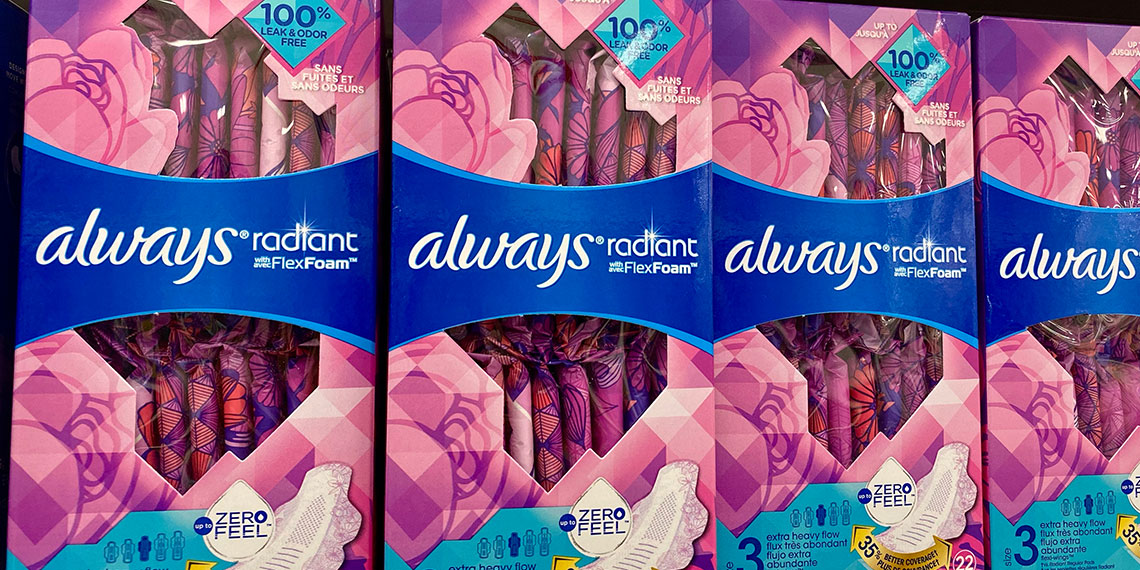 Even though the news can be pretty bleak these days, there are still good things happening every once in a while. For instance, impeachment proceedings are finally happening, Selena Gomez is back and pettier than ever, and Always, a major feminine hygiene company, actually stood up for inclusivity. Before I dive in and talk about pads and tampons for the next few hundred words, I would just like to remind everyone that feminism does not mean destroying the patriarchy—it means supporting equality and being inclusive.

Ok, now let’s talk about Always, which recently announced their decision to remove the traditional symbol for women (a circle with a cross on top, or more commonly known as the Venus) from its packaging. At first, I didn’t really think too much of this, because when I’m frantically grabbing whatever tampon box is within my grasp, I’m not really paying attention to the details—or lack thereof—on the box.

However, after giving Always’ move some thought while I sit at my desk not doing the job I’m getting paid to do, I am actually really impressed with them, because unlike the leader of the most powerful country in the world, the tampon brand recognizes and supports trans and non-binary people.

If you live under a rock, allow me to enlighten you on the topic at hand: there are lots of people who don’t identify as women, but who menstruate and need products to keep their bodies from leaking all over their favorite jeans. This should be a no-brainer to stay that these people should have the right to enjoy every basic comfort that other groups of people have. Of course, there are lots of pressing issues to address when it comes to protecting the trans, non-binary and gender-nonconforming groups in the world, but Always removing a symbol that ostracizes them is a good start.

So what sparked this change? Tweets like those from Melly Bloom saying, “Could someone from Always tell me why it is imperative to have the female symbol on their sanitary products? There are non-binary and trans folks who still need to use your products too you know!” She made an important point, and she wasn’t the only one. Many trans and nonbinary people and allies spoke out on social media, and thankfully, Always heard their voices, and decided to listen.

The brand told CNN, “For over 35 years Always has championed girls and women, and we will continue to do so. We’re also committed to diversity & inclusion and are on a continual journey to understand the needs of all of our consumers.” I mean, finally? We can’t always trust brands and corporations to do the right thing, but it feels like a major step in the right direction that Always is taking the first step with their packaging. This sends an important message to both consumers and competitors, and hopefully other brands take note.

After getting some backlash from a few idiots in the UK, the brand responded with a simple and clear message: “After hearing from many people, we recognized that not everyone who has a period and needs to use a pad, identifies as female.” In other words, “F*ck off, we knew exactly what we were doing.” I’m sure a brand as big as Always didn’t make this decision without thinking about it, and it’s great to see them standing by their decision. Even though today’s politics tend to be depressing, it’s refreshing to see a once traditional females-only brand is making changes to include everyone who menstruates.

hey @Always maybe don't put the female symbol on pads anymore? If I wasn't reminded by the fact that I'm bleeding out of an orfice that I never wanted, then that certainly reminded me that I'm trans 🙂 TRANS PEOPLE HAVE TO DEAL WITH THIS SHIT TOO 🙂

Whenever my current box of tampons runs out, I will definitely be switching from the close-minded tampon brand I currently use to Always, because it feels like the least I can do. While the change is definitely a small step in a much larger issue, it’s an important step nonetheless. Hopefully Always’ decision will start more conversation in our society and our corporations, leading to more important changes in the near future. At the end of the day, at least there’s one good thing that’s come out of the dumpster fire that is 2019.