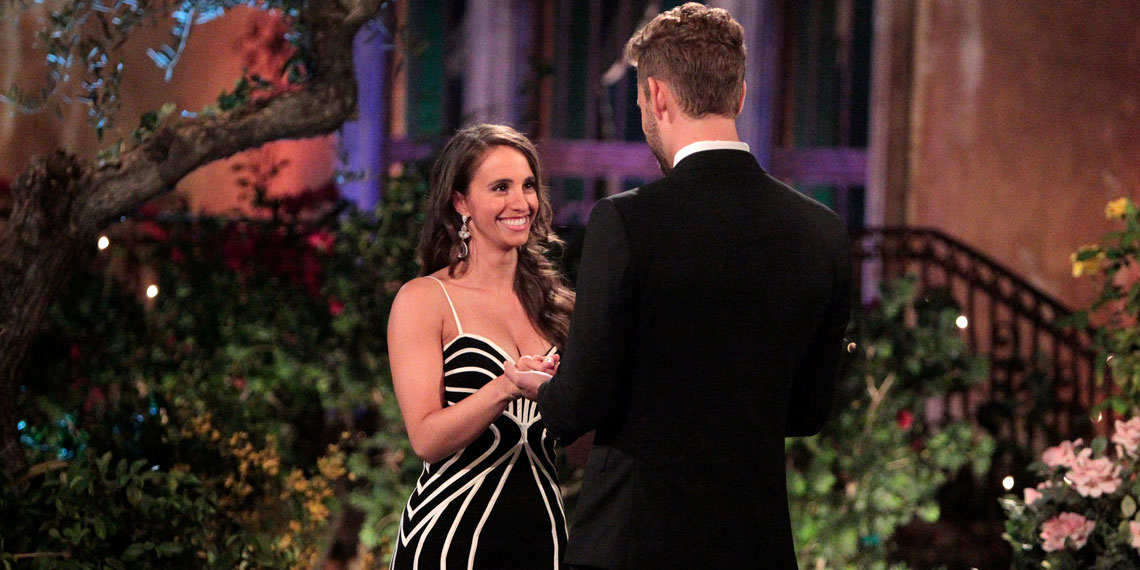 The Worst ‘Bachelor’ Night One Dresses Of All Time

First off, it would be highly insensitive of me not to begin this article with my sincere condolences: RIP Bachelor mansion. Through the years you’ve brought me hope, fear, pain, and most importantly, year-long engagements that almost always end in a breakup. Not to mention, you’ve taught me several valuable life lessons. Like, ALWAYS wear waterproof mascara, getting blackout on your first date will get you sent home and, of course, that the desperate one never wins. That being said, the only positive I can think of to potentially come from this tragedy is that a new mansion could bring the franchise a much needed refresh. I think we can all agree that the past few seasons have been a total snooze-fest. So fingers crossed a new mansion will bring the show a necessary revamp. Hopefully. Anyway, we’re currently between seasons as we anxiously (debatable) await the all-American virgin, Colton’s, search for love as ABC’s new Bachelor. This means that, until then, there is a void in my Monday nights where I find myself with an idle three hours. Welp, instead of using this newfound free time to do important things like learning how to invest in stocks or read stimulating educational literature, I’ve instead decided to take a deep dive into some of the worst Bachelor night one dresses to date. Please join me on my journey as we take a look back at some of the worst Bachelor night one dresses of all time. *Said in soothing Chris Harrison voice.*

PSA, apparently Google isn’t all it’s cracked up to be because trying to find the looks from all of the past seasons of The Bachelor thus far was way harder than expected. That being said, these worst looks are from more relatively recent seasons. But like, don’t think that I’m not totally aware of some of the heinously disgusting dresses from seasons prior.

Let’s kick off our “worst Bachelor night one dresses of all time” list with this monstrosity worn by Michelle Money, night one of season 15. I’m talking about the dress in the very top left picture of the Instagram below. I know it’s tiny, but given that I’m working within the parameters of the law, my options are a little limited. Therefore. This dress looks like it’s either from Wet Seal or from the Junior’s prom section at Macy’s. And look, I’m totally down for breaking out those Macy’s coupons and utilizing your Star Rewards money, but like, maybe use it for a new fall top or something?? NOT for your debut on television Bachelor premiere dress…

Have you heard the ***Spoiler*** from this Bachelor in Paradise/ Bachelor contestant??? Comment below for Michelle Moneys spoiler! • • • #bachelorinparadise #thebachelor #bachelornation ##bachelornation???? #michellemoney #maskcaraminimalist #maskcara #maskcarabeauty

YIKES, for so many reasons. I’m thinking Amy might have joined Michelle on her shopping trip to Wet Seal, because this metallic monstrosity would definitely be a hot seller there. However, the greater fashion crime here is the way her dress is fully smushing her boobs, and then making them spill out the top. Tailoring is your best friend, people! Like, they look like they’re being suffocated and are trying to make a break for it. Somebody help them!!!

I don’t know what makes me want to puke more: Carly Waddell’s season 19 night one dress, or the fact that she’s married to Erectile Dysfunction Evan. JK, they seem very happy together, so obviously the dress is way worse. Carly’s dress is pink, poofy, obnoxious, and honestly rude to my eyes. Looking at this dress legit makes me instantly angry. It’s trying way too hard to be sweet and innocent and is totally something a grown woman still obsessed with Disney princesses would fawn over. And, considering Carly brought her mini karaoke machine as her choice accessory of the night, I’m assuming she’s one of those women.

Honestly, I found, and continue to find, the blonde twins from Ben Higgin’s season of The Bachelor annoying af. From the countless bottles of VS PINK body spray we saw covering their rooms during hometowns to their nauseating twin shtick to the fact that they’re actually from Vegas, I just can’t. And I ESPECIALLY can’t with Haley’s (I think?) night one dress. She looks like a gladiator insect starring in the broadway version of A Bug’s Life. Tbh, I don’t even know if I’m referring to the right twin here, but neither dress is great, and both the girls suck.

Double the trouble or double the fun? ???? #TheBachelor

This may go against popular opinion, but I legit HATED Vanessa’s dress. I couldn’t look at it without feeling dizzy and like Chris Harrison was trying to hypnotize me or something. Idk if it was more so due to this dress, or the fact that I had chugged three glasses of wine prior to the premiere, just so I could kind of trick myself into thinking Nick was cute (if I  squinted really hard). I think this dress could have maybe worked on a girl with legit no curves. But on a stunning girl who already has curves, like Vanessa, it was just too much. Kinda like that weird scrapbook she gave Nick, claiming her students had made it for him. Too much, Vanessa.

If Bachelor Nation wants to step it up and get a full breakdown of every night one look from every past season, I’m here for it and will gladly do a more extensive fashion critique of all the night one dresses. Until then, I look forward to Colton’s season of The Bachelor and the chance to see a whole new group of women make terrible fashion choices.