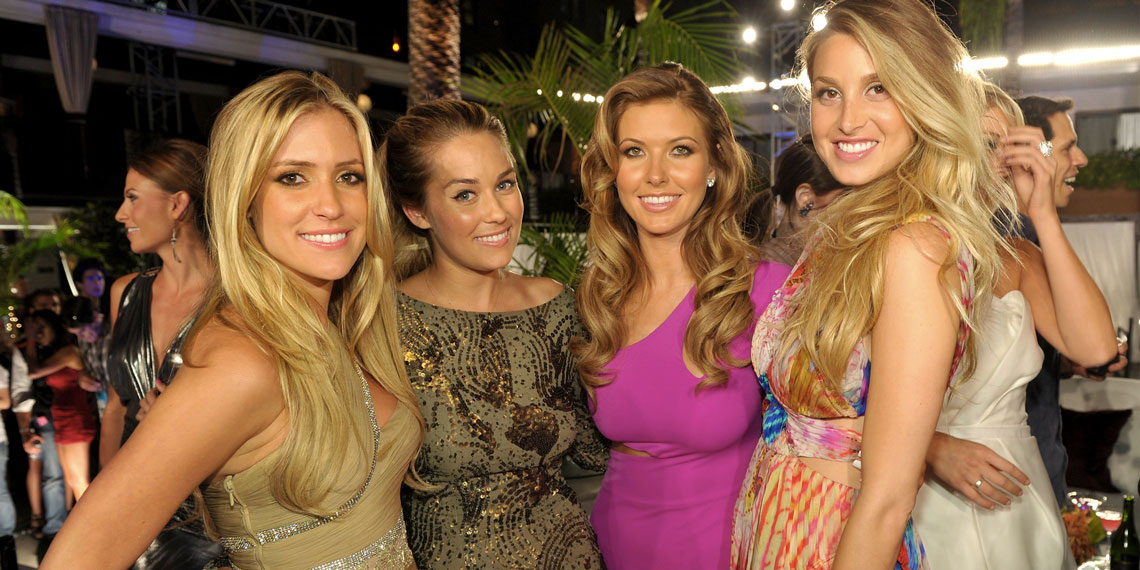 Which Cast Member Of ‘The Hills’ Has The Best Life Now?

It has officially been eight years since the series finale of The Hills. That means it’s probably been about 10 years since you’ve actually cared about The Hills, because I think most of us can agree that’s right about when we became a Kardashian nation. Although we were all obsessed with the cast of The Hills at one point, I’m willing to bet the entire collection of LC-inspired headbands collecting dust in a drawer at my parents’ house that you aren’t keeping up with their lives now. Here’s an analysis on each of the stars, and how well they’ve stayed relevant since the finale. In other words, which cast member of The Hills has the best life now?

I may be a bit biased because I’ve admired HBIC Kristin Cavallari since like, middle school, but I think she’s the clear winner when determining which cast member from The Hills has the best life now. She may not have the most Instagram followers, but she does now have her own reality show on E! with her name in the title, and honestly, what more is there to strive for in this lifetime? Plus, her collection is sold at Nordstrom, which is pretty impressive for a reality star. I mean, even the Kardashians had to start out at Sears.

Present-day LC turned out to be almost exactly what you’d expect from the girl who didn’t go to Paris. She now has a mom haircut and a beige Instagram aesthetic consisting of images that look like the photos that come inside frames at Kohl’s. Oh, and yes, she’s still selling floral chiffon wrap dresses there. Like I said, Lauren’s life is exactly what we all predicted it would be: overwhelmingly average. I guess that’s what happens when you don’t take your staged Teen Vogue internship more seriously; if she played her cards right, she could have founded Glossier or something.

Analyzing Spencer Pratt’s life in 2018 is tricky business. I mean, it’s been a whirlwind. He definitely gets talked about more than most of the cast members, but that’s because he’s actively working on a campaign to Make Speidi Famous Again. It used to be exciting to get a retweet or a Snapchat from Spencer, until you realized that he retweets and Snapchats literally everyone and then retweets all of their “Oh my god, Spencer Pratt just tweeted at me” tweets. (Say tweet again. Tweet.) Sure, his crystal business, hummingbird obsession, and dedication to wearing the same tie dye shirt everyday is amusing, but he has got to step it up if he wants to remain relevant for much longer. Ultimately, I’m really hoping it’s soon revealed that he and Heidi are cult leaders of like, a Taylor Swift fan club or something. Anything else would be a disappointment, tbh.

✨HEY PLAYA! GUESS WHAT!?✨ I have gifts for one of you! The Gucci Soho Disco bag + a Macbook! Or you can choose the cash option of $2,000 CASH! Take the 20 seconds to enter, it’s so worth it!! For a chance to win all you need to do is head to @babesquadgifting and follow all the accounts they are following! SO SIMPLE! Good luck! ???? Ends Friday July 14th 7pm EST! Winner announced by Saturday 7pm EST. _____ INTERNATIONAL GIVEAWAY. Anyone can win! Winner will be randomly drawn and announced within 24 hours. Winner must be following all accounts @babesquadgifting follows. This sweepstakes is in no way sponsored, administered or associated with Instagram Inc., Gucci or Apple. By entering, entrants confirm: that they are at least 18 years of age, that they release Instagram and all brands and participants of all responsibility, and that they agree to Instagram’s terms of use. VOID where prohibited. No purchase necessary.

Audrina has definitely stayed the most consistent with her personal brand over the years, which you have to give her credit for. Even her sponsored posts are pretty on-brand; they’re all like, açai snacks and sh*t. Audrina has a really trendy baby and a line of swimwear that nobody’s really ever heard of because it’s designed exclusively for people who are always on vacation and “just can’t seem to gain weight!” She has also rekindled her romance with Ryan Cabrera. I know that the first time they dated, it was probably arranged by MTV, but this time seems like the real deal. The most they’ve gotten out of it so far is like, a PEOPLE feature. I wish them a joyful lifetime of well-intended Instagram captions riddled with spelling and grammatical errors.

‘Merica …couldn’t of spent it with a more beautiful human!!! @audrinapatridge

Justin Bobby has a private Instagram at the moment, which is either the definition of “doing well in life” or “serial killer”. I would do anything for one more scene of him and Audrina at the beach (wearing combat boots, of course), while he mutters some actually kind of legit stuff about how Instagram should be a means to express oneself and not sell superficial sh*t. Last I heard, he was touring with his band and before that, he was a hairdresser. Obviously, he’d be higher up on this list if he was doing something more public, but that would totally ruin the magic of Justin Bobby.

Although he’s only like, the fourth most relevant Jenner, Brody is actually pretty high up on the f*ckboy totem pole, because he gets to DJ at Martin Garrix’s Vegas residency. He recently married a social media influencer, but Caitlyn Jenner did not attend, which is pretty messed up. Although Brody’s not really doing anything that any of us care about right now, I’m still hopeful that he’ll leak all the details of the Avril Lavigne Conspiracy Theory in the near future.

Heidi is definitely The Hills alum that has made the most typical foray into former reality star social media territory. Her #sponcon includes FabFitFun boxes and cleanse shakes, so she’s basically on the same level as someone who gets eliminated on the second night of The Bachelor. Right now, she’s spending the majority of her time wearing weird sun hats and retweeting fan-made petitions to stop Warner Music from removing her songs from iTunes and other streaming services. That is so profoundly depressing on many levels.

@310nutrition has more than the #310Shake, they have the best Cleanse ever and the New Year’s Resolution sale happening right now! You can also get ✨FREE✨ shipping using “gameon310” at checkout! ✌ #NewYearsResolution #CleanEating #Ad

Jason surprisingly might be one of the most inspirational people to come out of The Hills. He’s publicly made his struggle with addiction a way to inspire others to become sober. You may have seen him on Celebrity Rehab with Dr. Drew. He’s definitely not really famous anymore, but he had a kid and got married. You win some, you lose some.

I honestly have no idea what Stephanie Pratt is really up to these days. A light lurk through her Instagram didn’t provide the answers, and I don’t think that this necessarily deserves a full Google search, so I’ll leave you guys with this. It seems like she’s living in London or something, and she’s had a pretty successful glow-up. It’s always refreshing to see a supporting cast member of a reality show actually get flawless plastic surgery, because they usually end up on an episode of Botched.

So just looked at this & immediately thought- omg I have so many split ends and the fake lashes r way too long & completely wrong and I have chapped lips. Going to start practicing more self-care/love ASAP. It’s crazy how we can become conditioned to be sooooo critical of ourselves ????????????????

Lo is the founder of a women’s health company and has a blog called TheLoDown.com. I personally don’t believe that using your own first name as a play on words for vaginal health is the best way to ride the limited success you’ve received from a reality show, but to each her own.

To be totally transparent, I just had to Google Whitney Port to see what she’s up to these days, and that is never a good sign. She’s currently maintaining the social media presence of a travel blogger, but without the carefully curated aesthetic. IDK, I don’t really have much to say here, sorry.

My first time to Italy. Couldn’t be happier.