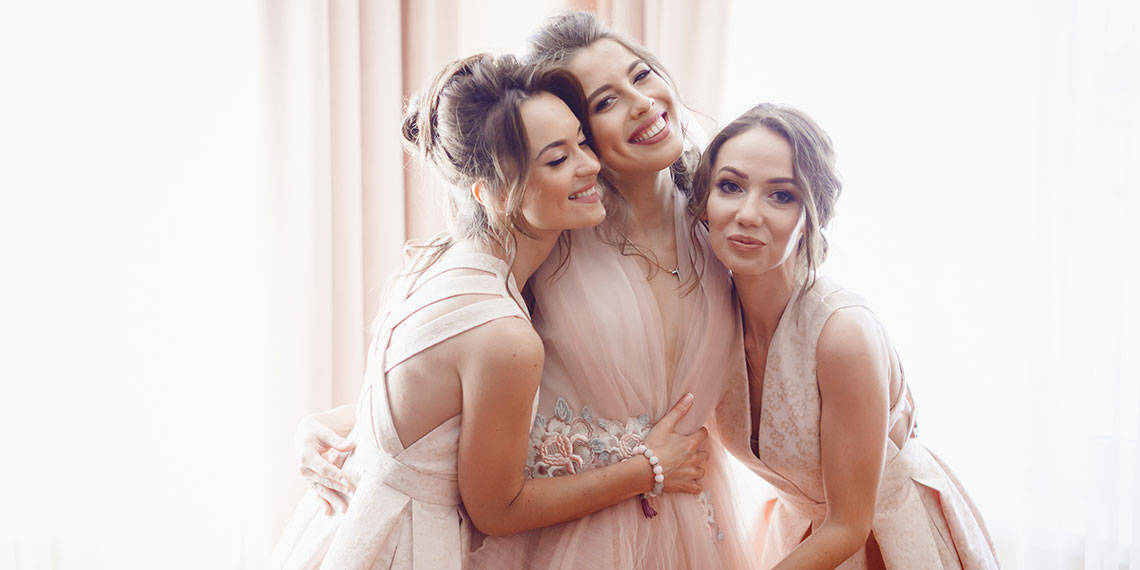 What Not To Do If You Have A Pregnant Bridesmaid

The best part about getting married (other than the whole “finding someone to stand by your side during the good times and bad for the rest of your life” thing), is that for once, FINALLY, everything is all about you. Sure, in your head it usually is, but now? Now it’s for real. Estranged friends come crawling out of the woodwork clamoring for an invitation to the wedding. Acquaintances who are trying to make their calligraphy businesses take off DM you about place cards. Family members comment on how prominent your collarbones are. It’s the stuff of dreams.

And then it happens. The phenomenon that occurs when a bride is of moderate popularity and child-bearing age: One of your 4-12 bridesmaids has the AUDACITY to get pregnant.

this is why I’ll be eloping instead. @luvvie

Whether she had been trying to get pregnant for years or this was a total accident miracle baby, you’re now faced with the fact that NOT ONLY is one of your besties jeopardizing all of your plans, but now she’s, dare I say, upstaging you? Before you throw her out of your wedding and wish ill upon her unborn child, take a deep breath and do your best not to jeopardize your entire friendship over something as small as bringing another human life into the world. If you want to ensure your friendship lasts beyond the second trimester, heed our advice and remember: Pregnant friends now make for great babysitters if you pop out a few of your own in the future. So if you do have a pregnant bridesmaid, here’s what NOT to do.

The most impressive thing my body has ever done is digest 14 breadsticks while hungover at the Olive Garden. Your friend is growing a human inside of her. Rumor has it, that sh*t takes work. Odds are, she’s already feeling bad. Between the morning sickness, backaches, and nightmares about having to take care of another human for the rest of her life (I’m just spitballing here), she’s already dealing with a lot. While it’s a bummer that she’s not going to be tossing back tequila in Cancun with you at your bachelorette party or partaking in some ceremonial puff-puff-pass after getting back to your Airbnb, do your best to love her in this stage. Take a million ‘grammable party bump pics and utilize your other friends for their overzealous alcoholic tendencies. Her ability to down Fireball like a fish may be gone for now, but her spirit is always with you. RIP.

Before she started growing a person inside of her, there was a good chance your friend would have been right by your side (physically and mentally) every step of the way. Dress shopping, mother-in-law bitching, wine nights to stuff invitations that turn into party nights to complain about how your fiancé doesn’t seem to care which linens you pick—she was your go-to. Now? She’s going to the doctor twice a week (disclaimer: I have no idea how often pregnant people go to the doctor, but this feels like a solid guess), sitting with her legs elevated 24/7, and insisting she needs to go home by 9pm.

Instead of expecting her to perform at the same caliber as she would have been if she hadn’t gotten knocked up, use her condition to your advantage. Ask your other, less pregnant bridesmaids to do the heavy lifting and hide out with Preggers in the other room, catching up and whispering curse words to her fetus. Bow out of the extended small talk at your shower to “make sure your pregnant friend is okay,” while really just talking sh*t together in the bathroom. It might not be what either of you had originally pictured, but it doesn’t mean it’s going to suck total ass, either. It could be worse. I mean, YOU could be the one who’s pregnant, so praise be for that not being the case, amiright?

Don’t: Be Unwilling To Change Your Plans

Turns out, having a baby wreaks havoc on not only your lifestyle but your body too—who knew? Between swollen ankles, an exhausted body that is literally growing another body inside of it, and the fact that you’re not allowed to drink alcohol for the longest period of time since you were like, 16, it’s a f*cking lot. What, I imagine, would make it harder, would be to have one of your besties be unwilling to accommodate you in order to be a part of her special celebrations. Sure, it’s a drag that a bachelorette party during your friend’s third trimester might not work or that a trip to somewhere with Zika might be out. But, as you’ll quickly learn with wedding planning, things tend to not go as planned. You can either embrace it or you can be a total bitch and try to fight it. The first option causes less stress-induced breakouts.

What is comes down to is this: If she’s one of your day ones, and you can’t imagine not having her at as many things as possible, talk with her and be willing to alter plans and compromise together. Unless she’s a total see you next Tuesday, she’ll understand that some things you can’t change, but can compromise on others. At the end of the day, what matters more: having her with you or having the dream events you envisioned in your head? Bonus question: If she’s not there, wouldn’t it mess up your dream anyway?

Don’t: Compare Her Now To What Could Have Been

Before she got knocked up, there’s a good chance she would have been right by your side, throwing up tequila at your bachelorette party or getting drunk with you after your bridal shower and laughing at all of the weird gifts you got from distant relatives (thanks for the fertility herbs, Aunt Jenna). Now? She’s in bed by 10pm at your bach party, if she even went at all, and she left as soon as the gifts were opened at your shower because a wave of nausea hit her. It’s easy to judge and compare her to what your friendship was like before, but ready for some hard truth? Sh*t’s not the same anymore. Not for either of you.

You’re getting married and she’s about to push a human out of her vagina. Instead of dragging your feet and complaining about how you pictured it all to go, try to remember that if everything stayed the same you would still be crying at the club (yes, the club. You’d still be going to CLUBS) about some loser who didn’t text you back instead of getting ready to walk down the aisle. Embrace the changes and do your best to celebrate both of you, as annoying as it might seem in the moment.

Don’t: Make This Time All About You

Remember at the beginning when I said this time was all about you? Joke’s on all of us, because one of your besties failed to practice the ol’ pull and pray. Now, as all of your college friends rush to see your ring, they’re also elbowing their way to your friend to get a bump picture for the ‘Gram. Yes, it’s annoying. Yes, it’s unfair. No, you can’t be a total bitch about it. While in a dream world everyone’s special moments would fall at different times so you could all have your own undivided attention, it tends not to happen that way. It’s the curse of having lots of friends. Sorry, you’re like, really popular.

The key? To ensure everyone has times that are all about them (showers, food tastings, baby registry shopping, etc.) and to focus on their milestones. While your wedding might not be the year-long “all about you” celebration you always pictured (which is obnoxious anyway), it’s better than losing a friendship over a baby that could, potentially, hold your finger with its entire hand someday and cause your ovaries to explode from sheer cuteness.

Sure, she’s a goddess, a gift from heaven, and a glowing, gorgeous example of femininity. But, while her pregnancy announcement is big, your news is too. Compromising so she can be at the shower, understanding if she can’t stay over in your hotel room the night before the wedding, and accepting that standing at the altar for an extended period of time might be too much, are one thing. Her making this time ONLY about her is another. While brides can become bridezillas, moms-to-be can become future-momzillas. If you’re compromising, so should she.

Just like a marriage isn’t a one-way street, neither is friendship, especially when you’re both experiencing exciting, scary, and life-changing moments. You need to be there for each other by listening to the venting, not undermining each other’s fears, and cherishing these special moments without undercutting the other. It’s just as important that she’s on board to compromising because while this time isn’t all about you, it’s (shockingly) not all about her, either.

Don’t: Forget Why She’s In Your Wedding In The First Place

Unless you got wasted and accidentally asked her to be in your bridal party (been there, done that), odds are she’s a pretty important person in your life. Whether she’s knocked up or not, she’s been there for you through tears, triumphs, and most likely lots of bitching about the person you’re going to marry that she PROMISED to take to the grave.

So, as you’re adding “find a breast pumping room” onto your venue to-do list and changing your bachelorette party date to a time when she won’t look and feel like a total beluga whale, remember that this friendship is about more than just a bachelorette party, a picture-perfect wedding, and bridesmaids in dresses that make them look bangin’ but still slightly less hot than you. It’s about being there for each other through the highs and the lows, the wedding planning meltdowns and the post-birth vagina stitches.

At the end of it all, friendship means never having to say, “I’m sorry I was a total bitch to you when milk was seeping out of your nipples at my wedding,” or something like that.