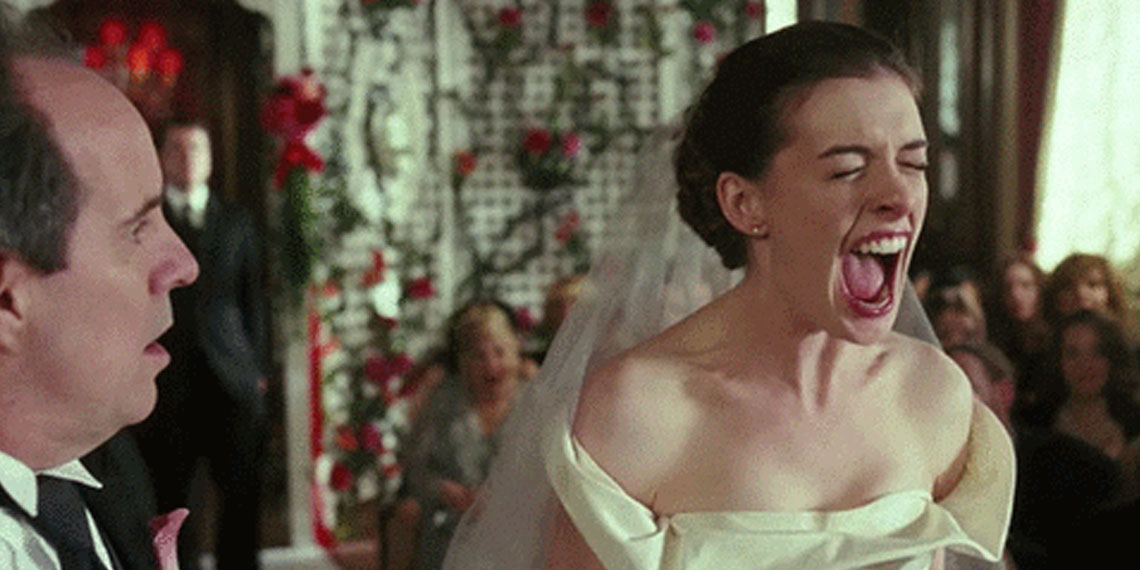 Reddit is the gift that keeps on giving. On a recent AITA subreddit (if you aren’t familiar, that stands for Am I The Asshole), a former bride sounded off about a bridesmaid who she feels went overboard in upstaging her at her wedding and, thus, ruined her big, special, perfect day. As a former bride and current day-to-day bitch, let me just say: every bride wants to be the absolute 100% center of attention on her wedding day, whether you’re an actual brat or just act like one during your wedding planning process. Everyone should be complimenting you. Everyone should be telling you how skinny you look. Everyone should be telling the groom how lucky he is and to not mess this up. Everyone should be dancing and raving about the food and crying because they’re just so f*cking happy to be there. You feel me? So I understand why a bride might feel upset if all eyes were not on her the entire duration of her wedding day… but even I think this Reddit bride took things more than a little too far. Because our Reddit bride was not the center of attention on her wedding day, she feels like her bridesmaid literally owes her a do-over. That in itself is pretty f*cking crazy considering the bride admits her wedding cost $30,000, but her reasons why she feels justified in asking for this re-do are, shall we say, completely f*cking unhinged. Let’s take a closer look.

The Reddit post begins, “My now husband and I got married 1.5 months ago. We had 6 people on each side of the bridal party. This wedding took 3 full years to plan and prepare for. When I got engaged, most of the bridesmaids were very single, including Anna, the ‘star’ of this story. Two of them were in long-term relationships. I wanted to just give the two partnered bridesmaids plus-ones. Anna seemed offended by this, because my wedding was then years off, and she was actually dating her now husband at the time (though it was casual).”

Let’s be honest, the cocktail hour is really just the pregame before the party. The only thing missing is the flip cup table | tw: austingrahamZ1

Alright, this seems within the realm of normal so far. You usually draw the line for a plus-one at serious partners or spouses—especially if you’re a bride on a budget. Then again, this bride puts in the subject of her post that her wedding cost $30,000, which is not super extravagant, but also not a budget affair. However, if it did take her three years to plan, it’s safe to say they were keeping an eye on cost. I guess if you’re broke and mom and/or dad aren’t helping and you’re drowning in student loans, that makes sense. But still, three years is a little bit long to plan a wedding, and there are people who would bristle at not giving members of the bridal party a plus-one, even if they’re not in a serious relationship at the time of your engagement.

The Reddit bride continues, “I eventually got pushed by my mother to give all of them plus-ones. Anna actually continued to date that guy, and married him four months before my wedding at two months pregnant. She brought her new husband as her plus one (who I never met prior) and convinced one of the other bridesmaids to take her friend as hers (when she KNEW we didn’t like him).”

Oh, moms—always peer pressuring us. So, Anna marries the guy she was casually dating, and, considering it took three years to plan this wedding, that is actually very normal! Plenty of people get engaged and even married within three years of meeting each other. Three years is a long time! And it’s actually kind of weird that she never even met her friend’s husband in the entire three years it took to plan her wedding. The only thing I will say is that it’s kind of sh*tty to get a friend invited to a wedding whom you know the bride and groom don’t like. But, given the way this Reddit bride has framed her entire post, I’m calling into question that Anna knew the bride didn’t like the friend. This detail will become important later, for reasons you probably don’t expect, so just keep it in the back of your mind.

Here is where things start to unravel. The bride says of Anna, “She was hugely pregnant, and didn’t refrain from showing it off. We’re both fairly young (25) and in my husband’s culture, getting pregnant before late 20s/30s, married or not, is basically a teenage pregnancy and drew ATTENTION. She also has a vibrant personality and has a way of eclipsing everyone around her. Her husband is also very tall and incredibly attractive, which drew a lot of attention.”

Wow. Grab a suitcase, everybody, because we have a lot to unpack. Ok, first of all, if she’s hugely pregnant (by my calculations, about six months along), how can you NOT show it off? Like, it’s very out there, literally. What really seems odd is the whole “practically a teenage pregnancy” thing. Anna is married at this point, lest we forget. She’s in her mid-20’s. What culture says that’s “basically a teenage pregnancy”??? Am I just extremely ignorant of all non-American cultures? Probably, but I still need to know either way. And what’s with the comment about her friend having a “vibrant personality”? Is she mad that her friend seems like a fun, positive person? Also, jazz snaps for the level of petty you need to be to be MAD that your friend’s husband is hot (and tall). Like, would it have been okay if he was hot and not tall, or tall and unattractive?

Apparently, this all was just too much for the wedding guests to handle. “All anyone spoke about of was Anna’s pregnancy and her attractive husband. Even in the line, people were asking about that ‘electric woman’ and of her pregnancy/marriage/life. When they got up to dance, all eyes were on them. Anna’s friend ended up hooking up with my brother, outing him as gay and causing a huge scandal.”

Is it honestly Anna’s fault if she’s the life of the party? I guess bridezilla was hoping she’d tone it down, which I would understand if Anna is the type of friend to purposefully cause a scene every time she goes out to get attention—but we have no indication of that from this post. And like, IDK, it sounds like the guests were more intrigued by Anna and her husband than offended at their presence. The best part of this part of the story is Anna’s friend hooking up with the bride’s brother and “outing” him. That was probably uncomfortable with possible negative consequences for the brother, I’ll give her that. But it feels like all the anger is misdirected at Anna when really the bigger scandal was the hookup. And maybe the real problem is not that Anna’s friend ended up hooking up with the brother, but that there were homophobes at the wedding who were so scandalized by two men making out that it supposedly ruined the day.

It gets more insane, if you can believe it. Reddit bride says, “I ended up leaving midway through the reception in tears, and never attended the next morning’s brunch. Anna and her entourage left early the next morning and also didn’t attend. I can’t even look at the pictures without crying and desperately want a do over. I’m not a bridezilla, but this was beyond the pale. It felt like a celebration of Anna’s marriage. I’m sorry, but I put so much planning, effort, and money into this while someone that got pregnant without a thought and married spur of the moment reaped the benefits. I honestly feel like Anna owes me a wedding and did all of this as revenge for me offending her years ago. Am I wrong?”

What a brat. Just to recap: you complained about Anna making a scene, her friend hooking up with your brother and making a scene, then left your own reception crying, creating MORE of a scene? Isn’t that kind of a slap in the face to all of the other guests who came to see you and have a good time? The same can be said of skipping the next day’s brunch. Anna wasn’t even there! That was your big chance to get some one-on-one time with your guests! You don’t get to complain about Anna ruining your day when you created just as much of an issue by leaving and not even enjoying your own brunch that you also presumably planned and paid for!

Does the medal come in rose gold encrusted with diamonds?

To go so far as to type out that Anna “did all of this as revenge” is so ludicrous I can’t even see straight. Anna dated a guy, got married, got pregnant, then came to your wedding and had a good time…all for spite? Is it cold up there in your ivory tower? To claim she did all this scheming JUST to ruin your day is absurd.

The commenters on the thread were pretty quick to side-eye the Reddit bride, too. “The biggest clue to me was ‘the wedding took a full three years to plan’. … OP is overly obsessed with her own wedding. When you put something on a pedestal that high, it’s always a disappointment.” Preach, commenter on this thread. If it takes you three years to plan your PERFECT day, then you’re so detail-oriented that nothing will ever be perfect.

Overall, most, if not all of the commenters agree that yes, this bride was the asshole. Her main issues with Anna seem to be that she has a hot husband, got married, got pregnant, and is a social butterfly. I don’t want to pile on the Reddit bride by calling her a horrible person or anything like that, though. More than likely, this bridezilla is experiencing a huge downer after the wedding, which is understandable when for three years you lived and breathed planning and budgeting for it and, in a flash, it’s over. Naturally, you’re going to pick it apart and try to find what you could have done better. But where she took it way too far was asking if she is justified in demanding her friend help her throw another wedding. Girl, no! Like, what, you think your bridesmaid is just going to Venmo you thirty thousand dollars because she had the audacity to have fun at your wedding? Yeeeah. Let me know how that goes.