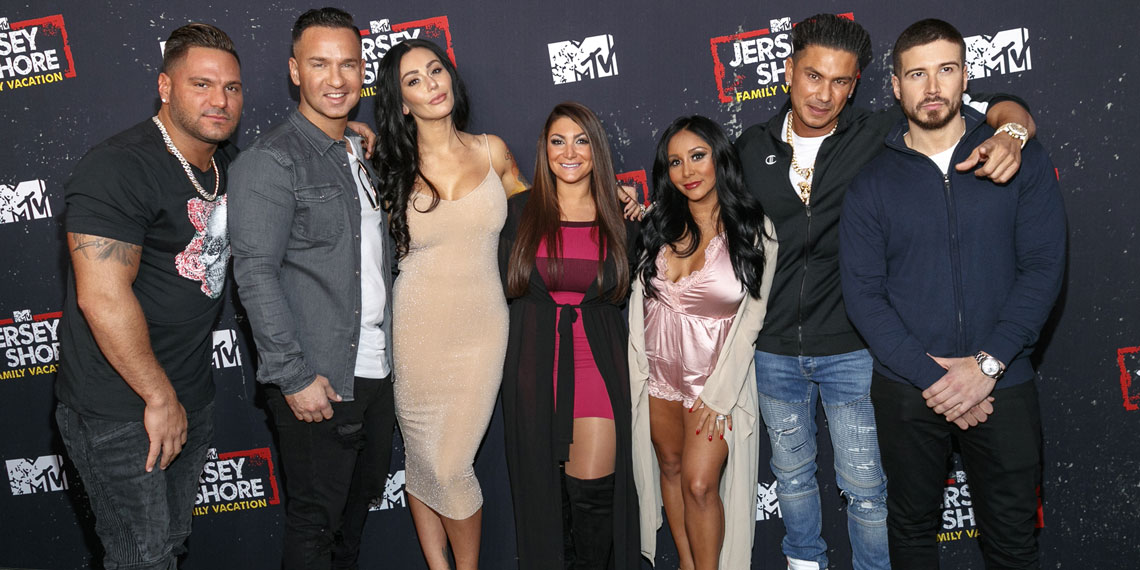 I was lucky enough to go hangout with the cast of Jersey Shore last week at the premiere party for their new show Jersey Shore: Family Vacation. The red carpet was actually a leopard carpet, which let’s be real, it was a leopard rug. But the stars of the evening were the most surprising of all—only about half the cast had the same face as they did 10 years ago. Guys, Botox is not for the weak.

Snooki showed up wearing what I assumed were children’s pajamas, and when asked about her outfit she legit went, “It’s PAJAMAS!”

Snooks said they partied super hard in this show, regardless of them being parents and older. Being away from your kids is definitely a reason to celebrate, but Snooki said that both she and Jenni had “mom guilt” from leaving their kids for so long. The main difference in their partying now, however, is that while they drink just as much as before, their hangovers are now three-day events. Same.

Snooki also that she was getting worried about her kids knowing ~things~ about her. Just that day, she went to the grocery store and someone screamed out “Snooki!” at her. Her son asked what a Snooki was, and she replied, “That’s mommy’s job.” I mean, she’s not wrong. She decided that she was going to tell her kids that she’s an actress, “which I’m not,” and that the show is scripted, “which it’s not,” until they figure out it’s true for themselves. I guarantee her kids will be exactly like her, so I doubt they will be surprised.

The cast seems to have done pretty well for themselves since the OG Jersey Shore ended 6(!) years ago. And that even includes Mike “The Situation”, who they all absolutely raved about.

Mike told me that he’s been sober for 28 months now and works at a rehab facility in Jersey as a speaker and does events with them. He also said that he’ll find out what’s going to happen with his potential prison sentence in the next month or so. He was so nice I actually felt bad for him, which is saying A LOT, considering what a tool he was on the original show. But, according to the rest of the cast, Mike has done a total turnaround since being sober and made up for his past. JWoww (who is so fucking skinny and has boobs bigger than my face) even said they now call him The Inspiration instead of The Situation, which she said so sweetly, I almost gagged.

Ronnie kinda hid from us, but we asked the rest of the cast about Sammi not coming for Family Vacation, and they all had the same answer: they want her back so badly, but she said no. Honestly, I can’t blame her. Her relationship with Ronnie was borderline abusive, and I’d be over that shit too.

The new show is already renewed for season 2, and it hasn’t even premiered yet—that should tell you how good Jersey Shore: Family Vacation will be. The entire cast seemed so excited to be back in the limelight, and I can’t blame them because really, what are any of them going to do outside of this?

The actual party to celebrate the premiere was fun with an open bar and a whole slew of Bachelor rejects. The Chad himself was there with a tiny blonde girl dressed like Britney in a music video. He was hanging out with Ronnie quite a bit, and like, of COURSE they would get along.

I talked to Ashley I. and Jared for a while, and they were both super cool, still best friends, and assured me that neither of them were going to Paradise this year. Boooooooooo. Is it even Bachelor in Paradise without Ashley I.’s tears?

Ashley also said she’s totally over Kevin and when I said, “fuck that guy,” she was like, “no he’s fine, it just didn’t work out,” which was v mature, Ash.

Alexis and DLo were hanging out, also both dating people, also no-go’s for Paradise. If this season doesn’t have someone doing hilarious commentary, I will personally blame Alexis for this.

The Jersey Shore cast had a great time drinking Champagne and dancing like we were all back at Karma. You can catch the premiere of Jersey Shore: Family Vacation tonight on MTV at 8pm/7pm central. Aww yea!