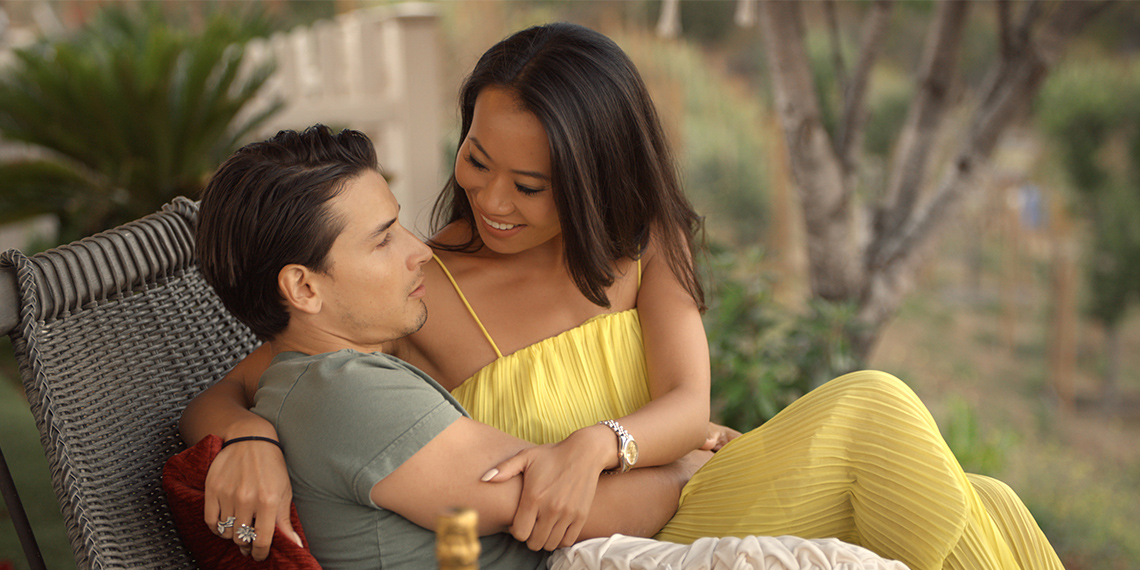 We Have To Talk About The Emotional Abuse On ‘Bling Empire’

Netflix’s Bling Empire is the latest new show to whet our ravenous pandemic streaming appetites, and for good reason. The show follows the delightful antics of IRL Crazy Rich Asians Kevin, Kane, Cherie, Kelly, Kim, Christine, and of course, Anna Shay, as they throw parties and solve mysteries like “where are Kevin’s parents?” and “Is Cherie’s baby actually her reincarnated mom?” Everything would be fine if it weren’t for one individual: Andrew Gray, an actor best known for playing the role of Red Power Ranger from 2013-2014. I’m not kidding. In Bling Empire, Andrew plays the role of Kelly’s f*ckboyish boyfriend, but instead of just being kind of a tool we all hope she breaks up with, he displays a number of legitimately alarming behaviors that at times makes the show hard to watch. Watching their relationship unfold, I couldn’t help but think back to emotionally abusive or harmful partners I’ve dated or seen others date in the past. Throughout the season, Drew throws up red flag after red flag, and the internet definitely took notice. Here are just a few of the concerning behaviors Drew displayed throughout the season.

Do I even need to explain this one? I presume we were all as shocked as Anna Shay when we heard Drew screaming at Kelly over the phone in the very first episode. Not only was this behavior shocking, it’s also textbook abuse. Screaming or shouting is a common form of abuse and potential precursor to violent behavior. Sure, we all get heated with our partners from time to time, but we all know the difference between that and full-volume screeching at them over the phone the moment they pick up over a misunderstanding that could have been solved with a slightly salty text. From the moment Andrew came on screen, this dude’s flag was blood red.

Another disturbing Drew moment came when he realized Kelly had discussed his freakout and their subsequent couples counseling session with Anna and Kim (despite the fact that Anna literally heard him screaming at the time). Drew tries to guilt trip Kelly for discussing their relationship with her friends (a very normal behavior that should be allowed in every relationship) in an attempt to keep her quiet about his outbursts in the future. By pushing Kelly to agree to never discuss their relationship with others, he’s protecting himself from anyone finding out about his abusive behavior in the future.

At the apex of his creepiness, Drew accompanies Kelly to a couple’s counseling session in which she finally reveals the relationship has to end. Throughout the session, Drew continually gaslights Kelly about her version of their relationship, instead categorizing it as “perfect” in an attempt to get her to stay. Luckily, the therapist is having none of it and makes Drew confront the disparity between his version of events and Kelly’s. Also, did you notice how that therapist separated him from Kelly so they could make a plan to get her out of the house? My guess is that therapist was a lot more alarmed by Drew’s behavior than she let on.

After making it clear to Kelly he did not want her to discuss their relationship, and after his abuse became more widely known in the group (thank you Anna Shay), the season ends with Kelly and Drew reigniting their relationship secretly because she doesn’t want to “deal with the drama.” Isolation puts Kelly in an even more vulnerable situation, because her friends aren’t even aware that she’s in an abusive relationship to keep an eye out for her.

Drew only just found out that Kelly went on a date with Kevin while they were broken up, but I don’t think it’s the last we’ll be hearing about that issue, especially since it was the first thing Drew wanted to know when they got back together. Sure, none of us want to hear about the people our partners dated when we weren’t together, but extreme jealousy is a form of controlling behavior that I could definitely see becoming an issue with Drew in season two. Unless of course, he doesn’t come back for season two, which I think we’d all be fine with.

As you can probably imagine, Drew’s behavior did not go unnoticed among Bling Empire fans, with people on Twitter calling him a “living breathing red flag.” Social media lit up after the show’s debut with posts from users concerned about Drew and Kelly’s relationship.

Drew from Bling Empire is frightening. If the show is close to an accurate portrayal then Kelly should run and never look back. That level of emotional abuse and manipulation is dangerous. He may want to change and heal but he needs to do that alone.

Personally, I found Andrew’s presence on the show distracting from what was otherwise a very fun watch. Bling Empire simply doesn’t need someone like Andrew in the cast. There’s enough drama and intrigue between Anna, Kim, and Anna’s penis pump to make up for anything the Drew/Kelly storyline is bringing to the table. And more importantly, does Netflix really need to be elevating this kind of abusive behavior? While Drew’s red flags are anything but charming to someone who knows how to recognize them, young women and girls might see that kind of behavior normalized—or worse yet, romanticized—on a show like Bling Empire and go on to tolerate it in their own relationships. I know that when I was younger I tolerated a lot of abusive, toxic behaviors because they reminded me of relationships I’d seen on TV. These relationships seem sexy and fun when you’re watching them, but when you’re in them they are anything but, and no one should be left believing screaming, jealousy, and gaslighting are okay. Here’s hoping Kelly and the rest of the Bling Empire franchise leave Andrew where he belongs next season: in the trash.

If you or someone you know are the victim of abuse, check out the National Domestic Violence Hotline here.