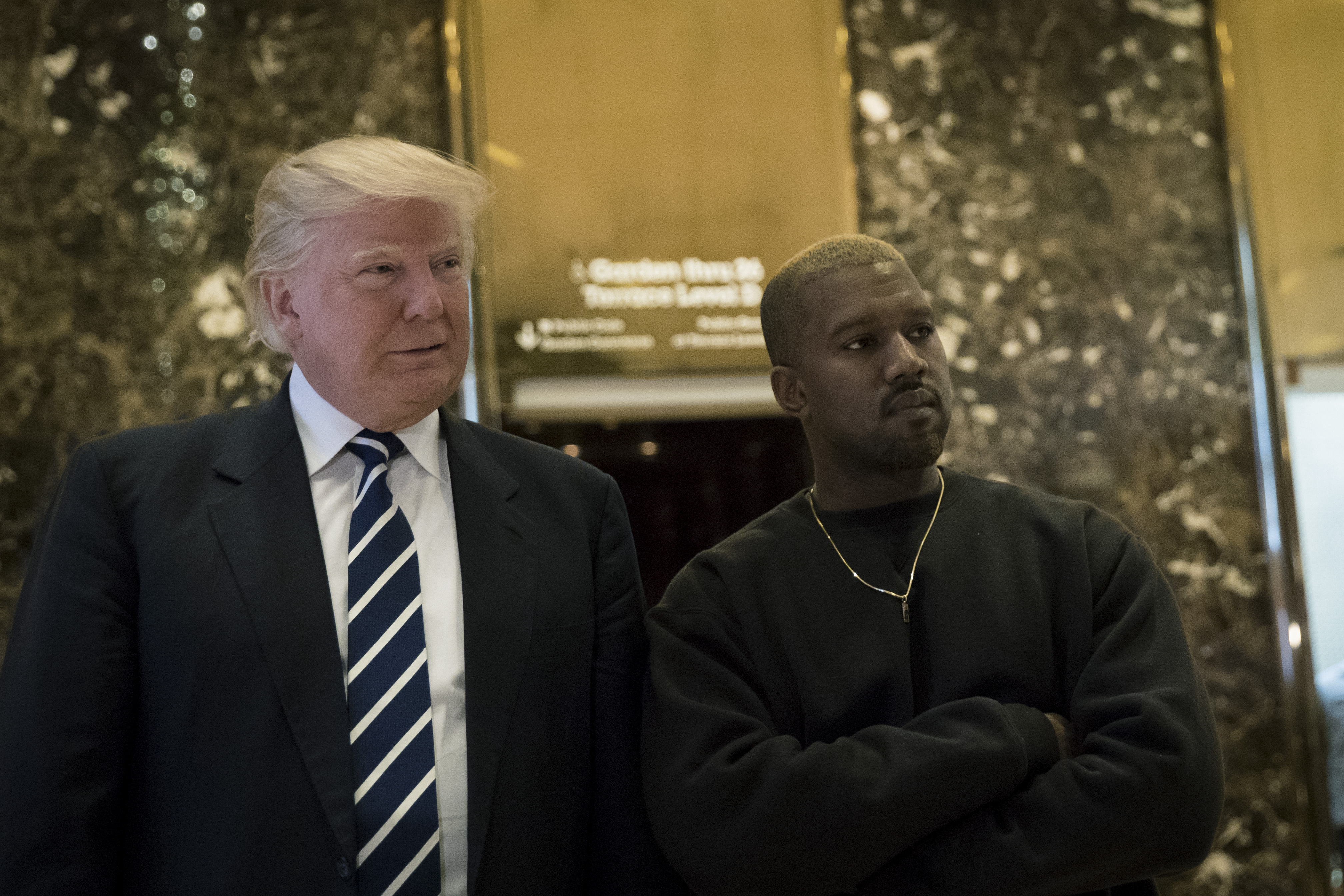 Has Kanye Secretly Been Trolling Trump All Along?

The boys are  back in town! By the boys I mean Donald Trump and Kanye West, and by ‘back in town’ I mean meeting in the White House. That’s right, Twitter BFFs Trump and “Ye” are getting togeth for a lil’ meeting this Thursday AKA tomorrow. Adorbs. The two are supposed to meet with Jared Looks-Like-He-Just-Proudly-Jizzed-In-His-Pants Kushner to talk about prison reform and violence in Chicago. These are important issues…being discussed by two unstable narcissists and a greedy, immoral third wheel…what could go wrong?!

Here’s my first question: what room in the White House is big enough to hold both Trump’s and Kanye’s massive egos. Haha, BURN. Okay, next Q: can Kanye actually convince Trump to make policy changes when it comes to the criminal justice system? And can he convince him to reconsider his recent suggestion that we implement ‘stop and frisk’ (which is racist and has proven to be ineffective) in Chicago (where West was born)? There’s a lot at play here. First of all, I’m not entirely sure exactly where Kanye West stands on these issues. I mean, I would assume he is for prison reform and against stop and frisk, but he has been known to tweet about how “slavery was a choice” and how we should “abolish the 13th Amendment”, so like who f*cking knows at this point. Also, will Trump actually listen to him or will he just pretend to care and then not do sh*t about it, AKA the strategy of all my exes? Trump loves anyone who praises him, so naturally he’s low-key obsessed with Kanye West. Will his pathetic need for admiration lead to him doing whatever Kanye advises? And this question, my friends, leads me to my ultimate Q: has Kanye West been playing the long game all along???

Okay, hear me out. It could be possible that Kanye West, as a self-obsessed celeb with no filter himself, realized that he knew exactly how to play Trump because they are so similar. This could be a real ‘takes one to know one’ sitch. If this is the case, maybe Kanye West planned to stroke the president’s ego by praising him online, knowing that this could eventually lead to him scoring a meeting with Trump, where he could advocate for things he knows the president’s inner circle would have conservative views on: criminal justice reform and how to handle violence in Chicago. Maybe this is an inside job. Maybe – just maybe – the call is coming from inside the house!!! Wow, I am killing it in terms of misusing references today.

However, there is also the chance that this is really just two idiots with too much money who love being complimented getting together to tell each other how amazing they are.

Unfortunately, this scenario is more likely. It is possible that these issues will be addressed in the meeting, but I’m not exactly hopeful that anything will really come of them. Kim Kardashian West has met with Trump in the past to talk about prison reform, and it led to him pardoning Alice Marie Johnson, who was in prison for nonviolent drug charges. That’s great and all, but it’s important to note that Trump releasing individuals from prison because a celeb who doesn’t make fun of him online told him to is *not* prison reform. There are sooooo many PoC in prison because of nonviolent drug crimes, and most of them aren’t related to Kim K, so privilege is still calling the shots here. Anyway, my point is that it will take systemic and institutional change to reform our criminal justice policies, and this will likely require more than a meeting between Trump and his biggest celeb admirer. *But* perhaps it is a start. Essentially, as of now we are relying on Kanye West for this one…great.

This all comes at a time when it’s becoming glaringly obvious that celebrities can greatly influence American politics. I mean, our president is a literal reality TV star, and Taylor Swift just made voter registration numbers soar after finally disclosing her political beliefs. It’s great when celebrities use their platforms to influence people to vote and  participate in democracy, but it’s also kind of sad that that is what it takes.  Perhaps we as a society should take this as a sign that we need to get our priorities in check. We should be educating ourselves and our peers, friends, and family members about why we should care about the state of our nation/democracy before taylor swift tells us to. Just a thought! Until then, here’s to hoping that Kanye West is able to persuade Trump to stop putting black people in jail at a disproportionate and alarming rate…