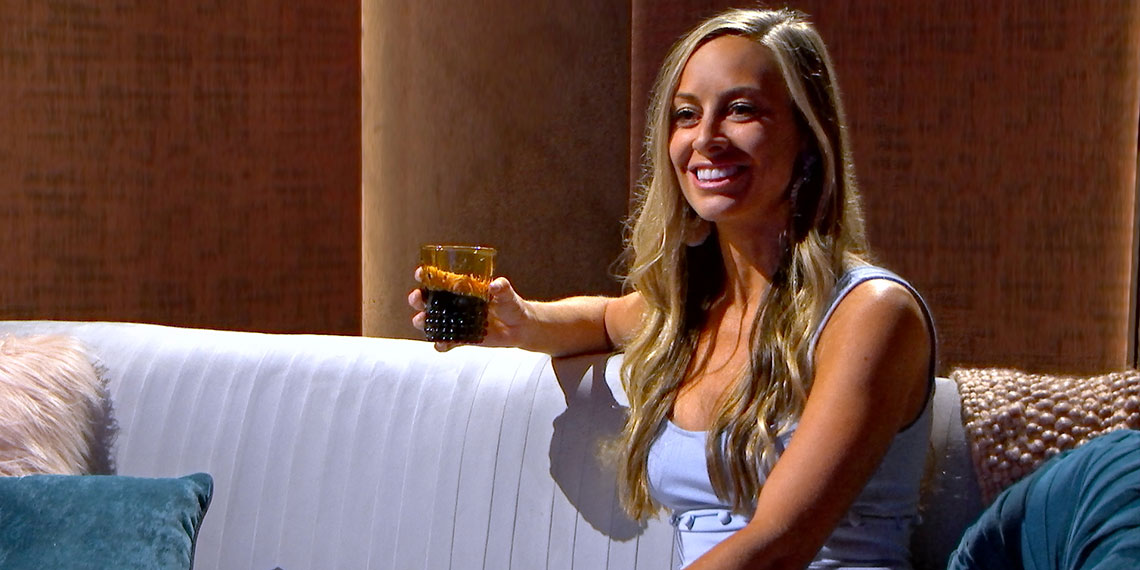 Please tell me you all are watching Love is Blind, Netflix’s latest reality show. PLEASE. If not, you should get on that now, because the next four episodes just dropped this morning. This article, however, is only about the first five episodes, because I am merely a human with a full-time job who just spent the last two nights binge watching this show just to bring you all my BRILLIANT and HILARIOUS takes. Am I insane to cram that much reality TV into two school nights when I also have other things going on? Yes, I am. Do I regret it? No, I don’t. Do I need a venti nonfat latte? Yes I do, and if you’re in Midtown East please bring me two, I’ll put your name in our security system.

I guess I should actually explain the premise of this show to you instead of the details of my coffee order. Basically, men and women get to know each other without seeing what the other looks like. They talk through a wall. It is blue and shimmery, and is reminiscent of that lava lamp we all had in our rooms in 1998. It also magically makes people able to fall in love with strangers within four days. And yes, if you’re counting, we are only two months into 2020 and I’ve already watched two shows where human beings shout words at a wall to communicate with each other. My mother is very proud. Anyway, once the contestants fall in love, sight unseen, the couples get engaged, get to meet, go on a trip, and plan a wedding. It’s all about as horrifyingly awkward as you would imagine. In fact, I have been shrieking in my apartment for days. I’m pleasantly surprised none of my neighbors have called the police, but also am slightly concerned that if I’m getting murdered I’m sh*t out of luck. Oh well! But, I’m sure I’m not the only one who was left shrieking through the awkwardness, right? So let me remind you of your horror, and let’s take a look at the most shriek-worthy moments of the season so far!

It’s so sweet of Netflix to provide a graveyard for the C-list boy band has-beens of the world! Everyone needs a final resting place, even if they were never Justin Timberlake. So, I was fine when Nick and Vanessa showed up in the first episode, thinking they would be the hosts. But then, they didn’t appear again until the couples got to Mexico, and Vanessa seemed like she had never read lines in her life. That’s when it became very obvious to me that the Lacheys needed Netflix for a free trip to Mexico. I had to look away, I was so embarrassed for them. I have a suggestion, guys. Cash in on this fame resurgence you’re getting from Jessica’s book, pay for your own trip to Mexico, and don’t ever remind me again how pathetic you are.

I hope you held your head low when you picked up your paycheck, Lacheys

Jessica! You are 34. You were practically alive when Kennedy was assassinated. Sienna Miller is in a movie playing a grandmother younger than that! You don’t need to sound like you walked out of your mother’s womb in 2016. It’s just not necessary. This show is called LOVE IS BLIND, not LOVE IS DEAF, so I would think you’d want to sound as normal as humanly possible. Not the case for Jess. I mean, except when she was talking to the camera and sounded like a totally capable adult woman. WHAT WAS THAT?! Perhaps this show wasn’t the only experiment going on—I think Jessica was conducting an experiment of her own. And her findings? Men do indeed LOVE a baby voice. Betches writers do not.

I could definitely audition for the Californians on SNL. I guess I ended up in the right place though! 📍🐻⭐️ #whyismyvoicelikethis #loveisblindseries #Californian

I’m sorry, but Carlton was the worst. Not only did he walk out on women that he did not deem interesting enough when they were in the pods, he also treated his fiancée Diamond like sh*t. First, he didn’t confide in the woman to whom he got engaged that he was bisexual. AND THEN! When he did, he expected her immediate acceptance without even a discussion, and when she wanted to talk about it he screamed that her wig was sliding off. HE INSULTED HER WIG!! This is a man that producers deemed mature enough to get married within a few weeks? Honestly, I don’t know what else he said past the wig drama because, as I’ve mentioned, I was shrieking, but I’m sure it also was terrible. His behavior combined with his hat that said “Daddy” on it made it physically impossible for me to watch any of his scenes in Mexico not through my fingertips.

Look, it’s awkward enough to watch something as intimate as a proposal. Add in the barrier of a lava lamp wall, and it’s even weirder. Then, mix in the fact that these people met only days ago, and it’s nearly unbearable. And finally, have the man proposing announce “I am your gift” while wearing a bow around his wrist, and I’m honestly shocked I did not spontaneously combust into particles of blood and guts. I did nearly drop my wine bottle, though, which would have been tragic because I still had to get through Gigi proposing BACK to Damian instead of doing the sane thing and saying, “That’s so nice you think you’re a gift, but can I get mozzarella sticks instead?”. Needless to say, my wine bottle did not make it through the rest of the evening.

Gigi’s Continued Mention of the “Days Without Sex” Memes

Day 329 without sex: I went to Starbucks just so I could hear somebody scream my name

Speaking of Gigi, she is one of the main reasons my throat is hoarse this morning. The second she started quoting the “Days Without Sex” memes at dinner to Damian I thought I would never recover. We get it, you want to have sex. Can’t you just raise one eyebrow at him and say “eh?” like a socially awkward normal person? You don’t need to go saying year-old memes out loud! It’s not cool! And it still wasn’t cool when you used the same joke again at the bar with the other girls! Is this what the world is like when you don’t have access to your phone? Instead of DM’ing things, you must speak them? That’s the Bad Place.

All The Couples Meeting for the First Time

Well this was savage. I love that the producers sent all the couples to the same hotel for their trip, and forced them to meet up with the very people that they had been dating only DAYS prior to getting engaged to someone else. Oh yeah, and they provided alcohol. If that’s not a recipe for Jessica regretting her choices fun, I don’t know what is! Jessica talking to Barnett was the most desperate thing I’ve ever seen, I could not even watch. But, I think we all might be Jessica when she returned from the night to say about the man she is SO OBVIOUSLY pining over: “he’s deeply troubled.”

Is it me, or do Barnett and Amber seem like a couple from Are You The One? instead of Love is Blind? Like, if this was one of my first impression articles about contestants, it would go something like this:

Barnett: Every show has to have a douchey frat bro for Ryanne to throw herself at in their DMs, and Barnett is that guy on Love is Blind. He 100% does not want to get married, but does want to get laid as many times as possible with minimal effort. Look for him to not make the final commitment and end up hooking up with all three girls he was pursuing after the show.

All I'm saying is @taylorswift if you're watching and I end up single after this. Ow ow! #LoveisBlind #netflix #ukulele #taylorswift

So I guess he’s back on the market then

Amber: Amber is the kind of girl that will ruin your life and enjoy doing it. Watch out Barnett, she’ll find you.

Ooohh probably not for long…

And that’s what stuck out to me during these first five episodes! I’m looking forward to losing my voice again tonight while watching the new episodes; hit me up in the comments and let me know what you all found shriek-worthy in Love is Blind!