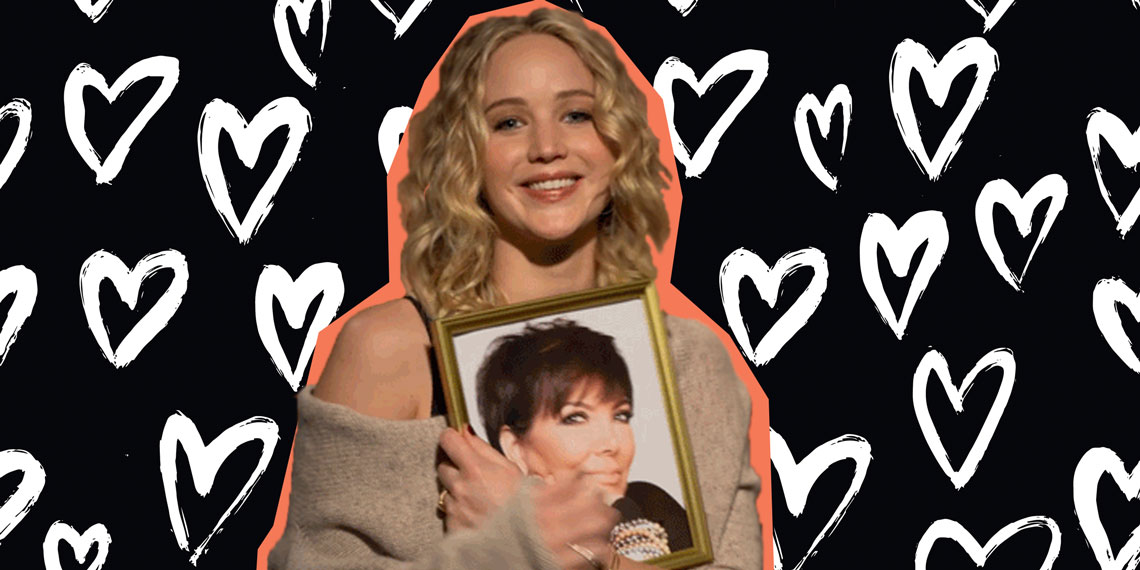 The 10 Most Random Celebrity Friendships Ever

What’s weirder than random AF celebrity couples? Random AF celebrity friendships. Hear me out. Weird couples make sense—the sex can be so good that it makes up for your incompatibility in every other aspect. But for a friendship, you need to like, sit and talk. Like please, WTF did Cher and Tom Cruise have to talk about? NOTHING. Here is a list of the most random celebrity friendships that will blow your mind and wonder what they have in common.

Jlaw is a huge Keeping Up With the Kardashians fan and for her 25th birthday surprise, she got Kris Jenner. Literally. Kris surprised her when she brought out the birthday cake. Since then, the two of them have had some amazing dinner parties (and lots of cocktails).  The most notorious story? Jennifer ended up naked in Kris’ closet, as one does.

After performing together at the 2001 Grammy’s, the two have stayed the best of friends. Before the performance, Eminem received some backlash for homophobic remarks, so his show was a huge statement. Also, Elton John, being the legend he is, helped Eminem with his sobriety. Friendship goals?

Not only are Ed Sheeran and Courtney Cox friends, but in 2013, they were actually roommates for a few months. When he was working on his album X, Ed stayed with Courtney in California without paying rent (not that he couldn’t afford it). He was apparently the ideal house guest. Sheeran made his bed every day, poured Cox cups of tea, and introduced her to her current fiancé, Johnny McDaid.

I feel like any friendship (or couple, hey Mila Kunis) is random AF when it involves Macaulay Culkin. But the fact that Kevin McCallister and Danny Tanner are hanging out just blows my mind. The fact that Macaulay is closer in age to Bob’s fictional daughter Michelle Tanner than to his BFF just seems odd. But TBH I do get weird vibes from both of them, so I guess it’s not a horrible match.

5. Mariah Carey and Will Ferrell

I would label this one as one of the most random celebrity friendships on this list. But nevertheless, the two have hung out on multiple occasions together and are friends who support each other. Will went to Mariah’s Vegas show in 2016 (aw) and Mariah supported Will in the best way she knows how:  using her makeup school techniques. She did his makeup (aka probably posed for a photo pretending to do his makeup), and it was amazing. Maybe Mariah’s notorious diva status has rubbed off on him, or maybe Will is teaching her how to laugh at herself a little bit.

Not only are they friends, but they went on a double date vacation with Mila Kunis and Dave Clark, Beatrice’s then-boyfriend. Back in 2013, the couples went on a trip to Saint-Tropez. What do two actors, a musician, and a princess speak about at dinner? I’d love to be a fly on the wall during that.

Not only are they BFFs, but they have their own TV show together called Martha and Snoop’s Potluck Dinner Party. The concept of the show is to bring celebrity chefs and rappers together for a cook-off. BRB if you need me, I’ll be binge-watching the entire show. Rumor has it that the two bonded in 2008 when Snoop first guest appeared on Stewart’s show and made mashed potatoes. LOL.

Although this friendship may be très random, it’s actually super wholesome and cute. The two met while working on the New York Restoration Project, which Midler founded. She once said about 50, ”He’s one of the newest members of our tribe. He’s really made my life worth living.” Aww. Sounds so motherly and I’m loving it. This might be my favorite of the random celebrity friendships.

What is with all these older white women becoming friends with younger men? These two met on the set of Arthur and just hit it off, making them a definite contender on this “random celebrity friendships” list. Our fav prim-and-proper lady said, ” is the archetypal bad boy, who is really just the best, goodest boy you could possibly meet.” Cringing at “goodest” but other than that, super cute.

The beauty of Twitter is that it births the most random celebrity friendships. After Snooki gave birth to her son in 2012, McCain tweeted a heartfelt congratulations to her. Snooki responded with a simple, “I love you John McCain.” RIP John, we and Snooks miss you.