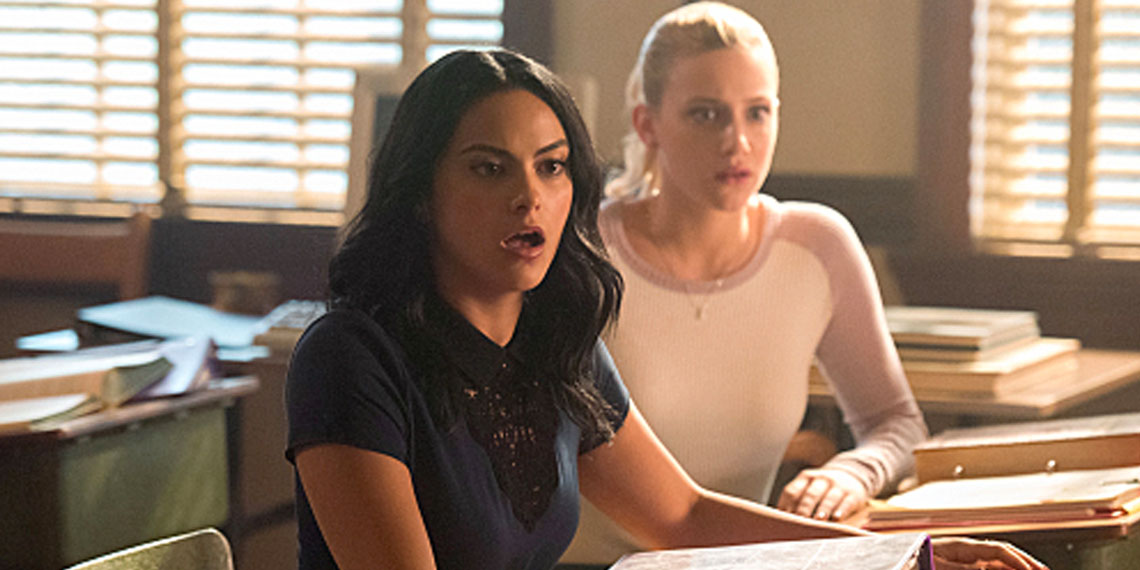 ‘Riverdale’ Recap: But They Were End Game

After a brief hiatus, Riverdale is back to its regularly scheduled programing. Thank god. I don’t know what I’m more grateful for this year: my health and happiness or that Archie might be dying from his brand wound. Lol like I have health or happiness. Now, if you’ll recall, in the last episode five members of Riverdale High’s junior class managed to break Archie out of prison with nothing but a blonde wig and a stink bomb. A BLONDE WIG AND A STINK BOMB. If you think that sounds ridiculous and far-fetched, that’s because it absolutely is. What can I say? I don’t write the show; I just watch it. God help me. And on that note, shall we find out how far the Riverdale writers are going to stretch the realm of reality this episode?

The episode starts with a close up of Archie’s abs, lest we forget what he’s good for on this show. No need, CW, I know exactly how far KJ Apa’s acting abilities stretch!

Archie is still chilling in Dilton’s bunker/Bughead’s sex den with some sort of fever? Idk. He’s sweating and breathing heavy so he’s either trying to rub his remaining two brain cells together or his classmates did a sh*tty job of taking care of his branding wound. So you can solve town murders, break someone out of prison, AND make honor roll but your triage skills are only average? I guess you really can’t have it all, can you Betty?

Oh right I totally forgot about Jughead seeing the Gargoyle King last episode. He runs into the bunker and tells Betty what he saw, but it’s suspect at best. If the writers of this show want me to believe that Jughead actually saw a supernatural being and not just a manifestation of his cocaine addiction, then they need to try harder.

Betty comes home and Alice is only mildly concerned that her 17-year-old daughter has been missing for 48 hours. I feel like Alice is being way too chill about this. My mother has been known to Facebook message my boss about my whereabouts if I don’t return her calls by the time I get to work, and I’m 26.

ALICE: Did you help break your friend out of prison last night?
BETTY: No, I was just with Jughead all night.

I’M SORRY BUT IS THAT BETTER?? Lol remember when Alice used to get outraged over Betty wearing red lipstick and now she doesn’t even bat an eye when Betty says she’s been out fornicating with her boyfriend for two days? Simpler times.

Archie wants to go find the guys that Hiram paid off to lie about Archie being at the crime scene, and it’s like ARE YOU STUPID BRO?? Literally the entire town is out sharpening their pitchforks over your ass rn and you think it’s a good time for a road trip? You know what, Archie? You deserve prison. Bye.

Cut to Riverdale High where the Sheriff is interrogating a room full of minors (without their parents’ consent!!!) about Archie’s escape. He’s like “if you helped him escape then there will be no more football practice or music rooms for you. Just prison.” First of all, I know for a fact that the Riverdale juvenile detention center has both football AND a music room, so you’re gonna have to try harder than that to break these kids.

He starts in on Josie and she immediately starts to seize. Why do I feel like it’s going to come out that this is another “stress seizure” induced from too much Adderall? I love that the writers of this show are like “it’s chill to bang your boyfriend in a prison locker room but just don’t do Adderall!! It’s a slippery slope.”

Lol I forgot about the tent city. Sweet Pea’s like “they’re tearing apart the city looking for Archie!!” and it’s like, no, sweetie. They’re just lifting up some tent flaps. This is not so much a city as it is dumpster site, but okay.

Okay, wait. Betty’s master plan for getting all the parents to tell the truth is to lure them to Veronica’s lame club with fake invitations. That’s it? I love how they’re all like “damn it, she got us.” I’m sorry, but, like, is there a gun to your head? No?? Then just f*cking leave! It’s not like you’re being held against your will! You’re adults, for god’s sake!

I think it’s funny that Betty still refers to Hiram, the man who imprisoned her friend and set metaphorical fire to everything her boyfriend knows and loves, as “Mr. Lodge.” Always so polite.

Hiram basically tells Betty to f*ck off and that he’s a very busy man and doesn’t have time to play Law and Order with his daughter’s best friend. THANK YOU, HIRAM. That’s what I’ve been saying here!

Okay, WHAT. Penelope says that Dilton Doily’s dad poisoned the principal back in high school, which feels super convenient because he’s dead now.

FP finds Jughead and handcuffs him to the fridge so he won’t play any more board games behind his back. FP is all “you sound like an addict, Jughead!” And it’s, like, maybe he is one though? Because that would make way more sense than the tree creature thing.

Meanwhile, Veronica is off running her one-woman innocence project. She’s determined to prove Archie’s innocence by homecoming. Anything for the Instagram, amiright, Veronica?

She finds some doctored video footage that could get Archie released and prove that Hiram bribed the witnesses to say Archie was the murderer. And by “could get released” I mean only in this REALM OF ABSURDITY because the evidence is flimsy at best. I would love to see her plead this case in front of a judge: “but the coffee cup was empty, your honor!!”

Cut to Archie, who did in fact leave the safety of the bunker and is off with Kevin to track down the witnesses. But don’t worry, people, he is wearing a disguise! A sweatshirt and a RED baseball cap that perfectly accentuates his flaming head, but a disguise nonetheless!! God I bet his parents wish they had never procreated.

Jughead tracks down Joaquin and starts interrogating him like a sister who had her shirt borrowed. There’s a lot of empty threats and hair pulling. Honestly, I expected more from a gang leader, but fine. Joaquin says that the warden was forced to play G&G too and that Archie had to die, which is literally everything they already knew. Jughead, maybe you should try saying you’ll tell mom if he doesn’t confess! That always worked for me.

Joaquin says that the warden met with “a man in a suit” and everyone thinks that means Hiram because I guess he’s the only one who wears those kinds of things. Jughead goes to confront him and I seriously hope he has another plan for getting information out of Hiram other than the “just please tell me” strategy he was using before.

Lol. First of all, I think it’s a stretch to call Hiram a “Kingpin” of anything. I’ve literally seen more frightening people on New Jersey transit. It doesn’t help that every time I look at Hiram all I can think is “Kelly Ripa paid for this role for you.”

Elsewhere, Betty is killing time at the coroner’s office. Like, can’t you just hang out in a mall or something? Why are you like this?

Also, calling it right now, the coroner is the Gargoyle King. That man and his shifty eyes are way too creepy to not be involved somehow. He tells Betty that Doily Sr. didn’t die of a suicide but was poisoned. Why he’s telling a high school junior anything other than “I’m calling your mom” is beyond me, but okay.

Archie and Kevin find the witnesses in a super sketchy cave. It’s unclear as to why this is the first place they thought to look. And before you come @ me in the comments, I’m sure this was explained at some point in the episode but every time Archie comes on screen I have a habit of blocking it out.

All of the witnesses are dead except one and OF COURSE Archie wants to him to a hospital. Do you know what it is to be a fugitive? You’re supposed to lay low. Not get in the middle of another murder investigation!!

OMG WHAT. Joaquin is dead?? Jughead finds him in the middle of Serpent territory with blue lips and a bloody symbol on his head. Honestly, it looks less like he was poisoned and more like he experimented with a Kylie lip kit, but I’ll let Jughead be the judge of what happened.

Okay,  but why does Betty have to turn every family dinner into an interrogation? She comes home, finds Alice cooking dinner, and immediately starts in on her for covering up the Doily murder.

BETTY: Care to explain why you covered up another murder?
ALICE: CAN I LIVE?

MY GOD Betty, let the woman live! She’s over here making a three course meal, and your ungrateful ass is still hung up on this crime? At least she didn’t actually murder anybody this time (probably).

OH SH*T. The power goes out mid-interrogation and the Gargoyle King is in their goddamn house. IN THE HOUSE. They run upstairs and lock themselves in Betty’s room only to find some v disturbing makeshift grave on her bed.

Okay, but why does FP not look at all surprised that the tree monster showed up for dessert? Alice is, like, losing it and shouting at him about the Gargoyle King and he’s looking sketchy AF. Did you throw the pig’s blood on Betty’s bed? It’s not like she didn’t deserve it!

Wait, is Alice having Betty committed?? To the Sisters of Quiet Mercy?! I’m pretty sure you can’t just commit someone for being a morbid bitch, otherwise I’d be wearing a straitjacket rn.

Archie tells Veronica that he isn’t coming back to Riverdale because even though his name has been cleared he’s still afraid of her daddy. Also, this little goodbye speech of his is simultaneously making me want to cry myself to sleep and set fire to anyone with a Y chromosome. Like, what kind of f*ckboy-ery is this?? He’s all “you’re perfect for me, which is why I need to be in a different state from you.”

VERONICA: but we’re end game.
ME:

Wait does this mean Archie is off the show now? *crosses fingers and toes* WAIT WHY IS JUGHEAD GOING WITH HIM TOO THOUGH?? We can’t lose both heartthrobs in one episode! Do you know how many teenage girls (and myself) are about to fling themselves off a building over this?

Also, if Jughead is gone then who is going to save Betty from the conversion camp her mother just threw her in? Welp, only time will tell. See you betches next week, where it appears Archie is going to mourn his breakup with the “love of his life” by hooking up with random farm hoes. Kisses!