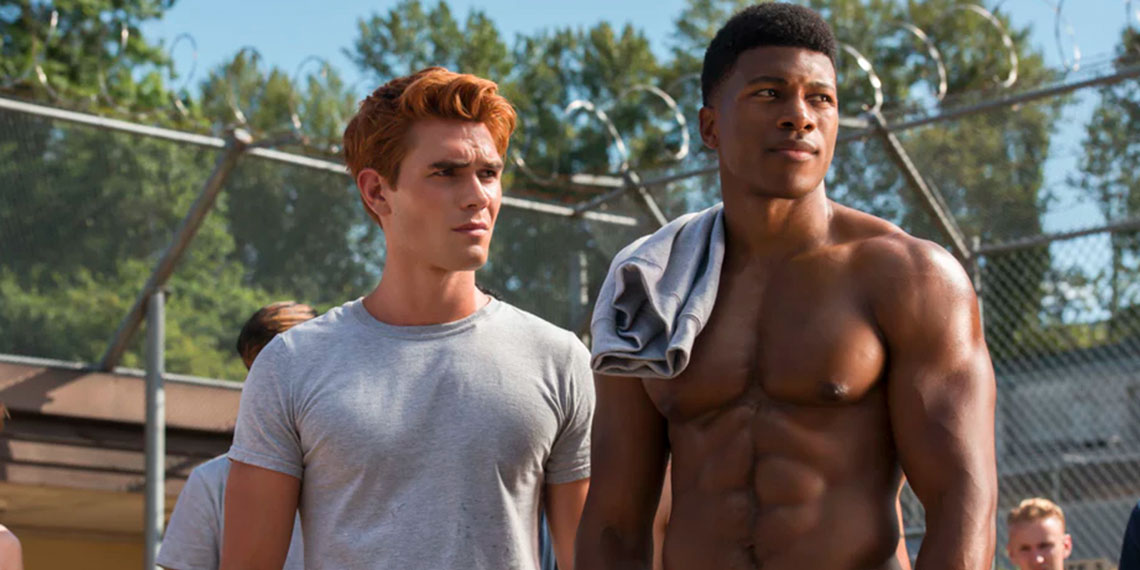 Welcome back, people, to another thrilling episode of Riverdale! And by “thrilling” I mean ridiculous and utterly beyond the scope of reality but, hey, isn’t that why we love this show? Last episode we learned that high school Alice looked better in a crop top during her second trimester of pregnancy than I do after ingesting a big gulp of air, and also that every parent in Riverdale was super into G&G back in the day. The principal was mysteriously murdered during one of their LARPing play dates and now everyone thinks G&G is the devil’s game. And if that sounds like utter nonsense to you THAT’S BECAUSE IT IS. And on that note, shall we get to recapping?

Lol, so his big escape plan is to just make a run for the gates while the guards’ backs are turned? In broad daylight? THAT’S IT?? That’s not a plan! That’s barely even a thought process.

Predictably the guards immediately foil Archie’s “plan” by OPENING FIRE on a bunch of minors. This is such a gross miscarriage of justice, I can’t. Like where is the Innocence Project/sorority philanthropy Veronica humble-bragged about starting up? Hmm?

Cut to Dilton’s bunker, where Betty is trying to figure wtf is going on with Jughead. He’s v deep into G&G and thinks that if he plays the game he’ll be able to figure out who the game master is and solve all the murders. At least that’s what I gather is coming out of his mouth because all I’m hearing is “troll this” and “dragon that” and “Dumbledore in the astronomy tower with the elder wand.” SPEAK ENGLISH, MAN.

Okay, WHAT. The warden has Archie shirtless and strapped to a bed. It’s like Betty and Jughead’s foreplay except the warden has a goddamn fire poker. Is he going to brand him?! I didn’t realize the NXIVM cult had a chapter at this prison.

Meanwhile, back at Riverdale High, Betty is catching the whole crew up on Alice’s story minus mentioning all the sex Alice was having. Honestly, those five seconds Betty spoke on screen could have summed up last week’s episode entirely. Sighs.

REGGIE: I don’t buy it. There’s no way my dad dressed up in cosplay and hung out with a bunch of lame-ass nerds.

THANK YOU, REGGIE. That is what I’ve been trying to say here!

Betty tells them that they have to investigate their parents but, like, subtly. All her friends are f*cking shook that their parents could be murderers and Betty is just like “so?” Yeah, I can imagine that discovering the same person who gave you life is also poisoning half the town would sound like a Tuesday in Betty’s world.

Okay, Jughead is f*cking losing it. FP confronts him about playing G&G and he’s acting like he just caught Jughead doing lines in the bathroom, which would actually explain his insane behavior rn.

FP: What did I say about playing that board game of sin? Put that game away right now!
JUGHEAD:

Meanwhile, Veronica hires her friend/child of the mob to help her infiltrate the prison. He finds a way to sneak her into Fight Club despite the fact that she’s been banned from stepping foot on the premise and her picture was handed out to the entire security team. But it’s chill because she’s wearing a wig!

They bring out the fighters and Veronica immediately spots Archie. She’s like “I’d recognize those abs anywhere!” Yes, well, wouldn’t we all, Veronica. I think it’s against his contract to be fully clothed for longer than one scene.

MY GOD it cannot be this easy for a 17-year-old in a wig to track down her incarcerated boyfriend. It just can’t. She finds him after the fight in the locker room completely alone and is like “I’ve only got about 20 minutes that should be enough time for a quickie, no?”

They start going at it against the lockers and it’s like if Archie is unsupervised long enough to raw dog his girlfriend in the bathroom then maybe he could escape now?? No?? Just me? K.

Lol scratch that. Veronica also comes to the same conclusion that they could easily break Archie out after one of his fights. Clearly all they need is a wig and a 20 minute bathroom break.

Archie’s like “yeah, yeah, that could work but have you seen The Shawshank Redemption? Let’s do that.” He wants to tunnel out through the drain underneath the fighting ring instead and it’s just like, why are you making this harder then it has to be?

ME: *listens to scheme to break Archie out of prison that makes no logistical sense* *knows they’re screwed*
ALSO ME:

Veronica asks all her friends to help her bust Archie out of prison and she’s acting like she just asked them to take notes for her in biology or something. Like, bitch, this is a big ask!

VERONICA: He’s mixed up in some sort of diabolical teen fight club and we have to help him!
ALSO VERONICA: Get in loser, we’re committing a felony.

Cut to the prison, where the warden invites Archie to his last meal on earth, which is literally what I tell myself my $60 Seamless order is when I’ve decided my diet starts tomorrow.

Lol I love how candid this guy is being with Archie. He’s like “what can I do Hiram hates you.” WHAT CAN YOU DO. Also, he does realize that Archie has two loving parents, one of whom is a lawyer, who would certainly notice if their son just randomly died while incarcerated, right? Like, there’s no way he’s getting away with this.

During their little dinner he tells Archie all about how Hiram set him up for murder. Apparently Hiram paid off all the witnesses with 10 grand each. He’s like “you’re life is only worth $30,000 how do you feel about that” and, honestly, I thought it would be worth less. Good for you, Archie!

Archie’s getting ready for his fight when Joaquin randomly shows up and starts kissing Archie?? Ah, so that whole “give me your shoes” thing was a metaphor for butt stuff. Got it.

OMG. HOLY SH*T. Just as I’m thinking Archie might throw Joaquin against the lockers for another locker room quickie, Joaquin shivs him! They drag Archie out to fight with an open wound and it’s not looking great for him.

Also, weirdly Jughead predicted all of this? He’s acting v v creepy and I don’t like it. Like, what is Jughead on? Did he eat future-telling mushrooms or something? Is that part of the game??

Lol. The kids are three seconds into the great escape and the door guy is already calling bullsh*t on Veronica and her plan. Like, it is step one and it’s already all going to hell.

Betty is also ready to start some sh*t  and I know this because she showed up to the escape plan party wearing all leather and her Serpents jacket. Subtle.

The guards bring Archie out into the ring and it looks like he has to fight Mad Dog?? What? He’s alive?? And looking like a goddamn snack??

ME: I would recognize those abs anywhere.

Veronica runs into Hiram right as the escape is about to go down and this has to be the part where the whole thing gets cancelled. Has to.

OKAY. WHAT. Apparently all Veronica has to do to take Hiram out of the equation is to step on his toe. Is this real? He’s a grown-ass man and a hardened criminal and yet you’re telling me he goes down after a stubbed toe? The man has done jail time! Veronica throws a stink bomb (?) into the ring and Hiram just watches it happen. He’s not even limping, for god sakes! He could totally end this!

Mad Dog tells Archie to run, that he’ll hold off the armed guards. He’s like “I can’t fit in that grate!” and it’s like you don’t even want to try tho?? I have a feeling he’s not going to make it and I’m pissed. The CW would kill off the only level-headed hot guy to ever be on this godforsaken show so that Archie can live.

Archie gets away but this whole thing is very weird. The warden keeps calling Archie the Red Paladin, which is exactly what Jughead has been calling Archie in the quest he wrote for G&G. So is the warden playing G&G too? WHAT IS HAPPENING HERE.

The gang is able to patch Archie up rather quickly despite the fact that he was stabbed with an object that was probs carved out of a tooth brush. K. Also, we finally get a good look at the warden’s brand and why does it look like the tattoo my sorority sister regretting getting on her junior year spring break? Like, is that the Chinese symbol for “live, laugh, love”?

Jughead thinks it’s a symbol from G&G and honestly this is not a good luck for him.  He’s acting INSANE. Sort of like me after after I’ve sifted through Making A Murderer conspiracy theories for 6+ hours.

The episode ends with the warden chugging cyanide (casual) and Jughead taking more mushrooms (I assume) and seeing the Gargoyle King. I guess we’ll have to wait until next week to see if Jughead is actually going insane or if Riverdale is adding “Tree Monster” to their cast list. Byeeeee.