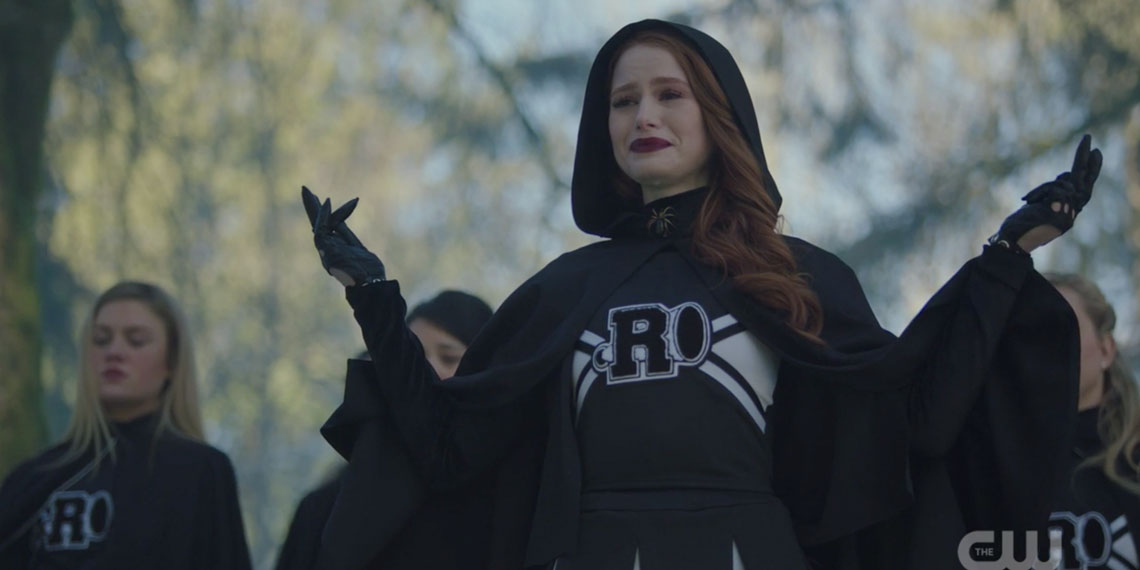 ‘Riverdale’ Recap: The Black Hood Is Back, Back Again, Tell A Friend

Hello, fam, and welcome back to another exciting episode of Riverdale! I almost didn’t even tune in this week for fear that The CW would try and turn this episode into part two of that musical abomination they dared air last Wednesday. Literally the only good thing that came out of the last episode was Cheryl dousing herself in pig’s blood and threatening her mother. Bless. Anyway, here’s hoping the singing is over with forever!

Andddd I spoke too soon. The episode opens at Midge’s funeral where Cheryl, a girl whose nicest words to the deceased were “you have the vocabulary of a baked potato”, has showed up in a black River Vixen’s uniform and is using the grave site as her own personal stage for her American Idol audition. This scene is not at all making Midge turn over in her grave. Not at all.

Lol Sheriff Keller trying to get to the bottom of this musical is me. He starts interrogating all of the kids and seems genuinely confused that a) there was a musical in the first place and that b) someone would want to document it for posterity. THANK YOU, SHERIFF.

Cheryl starts openly threatening the Sheriff at the funeral, because that feels appropriate to do in front of the dead girl’s grieving mother. I’d say Cheryl has no tact, but Cheryl can do no wrong. The end.

Jughead thinks Chic might be a copycat Black Hood killer and it’s the smartest idea he’s had all season. That said, his second smartest idea involved dramatically chaining himself to a statue, so, he didn’t start off strong to begin with.

Meanwhile, Archie keeps insisting that the janitor is not The Black Hood because “his eyes aren’t the same.” Cool, cool. They only shot a man dead because you said he was definitely The Black Hood, but whatevs.

We’re back to the Quiet Sisters of Mercy. Is it just me or does that whole place feel like the next season setting for American Horror Story? Jughead and Betty want to find out if Chic ever crossed paths with Mr. Svenson aka The Black Hood aka a probably innocent man in his time with the sisters.

OH SHIT. Chic is not Charles aka Alice’s long lost child. I mean, this plotline is straight out of my favorite Lifetime movie, so it’s not super original, but I still applaud the CW’s effort.

Archie starts actively seeking out The Black Hood because he has the survival instincts of a twig. He’s like the equivalent of the girl in horror movies who shows her tits and then ends up dead 10 minutes in. Tbh it’s beyond his time. This can’t end well for you, buddy!

Speaking of which, two guys jump out and grab him. If only he’d brought his hooded, shirtless entourage. Then it would truly be a fair fight.

Back at the Coopers’ house, Jughead and Betty confront Chic about not being Charles. Betty looks like she’s two seconds away from putting on her wig and taking this shit to the hot tub for answers.

Ah ha! So Nick Sin “Psycho” (clever, V)  is the guy in black following Archie around. He’s got Archie tied up and wants a million dollars or else he’s going to beat the shit out of Archie. Tbh it might do the boy some good. By all means, Nick, carry on.

Nick tries to ransom the Lodges for Archie’s life. Little does he know that Archie is about as useful to Hiram as my Metro card is to me getting to work on time.

VERONICA: Daddy it’s Archie! We have to pay them!
HIRAM: Lol

Cheryl decides to write a think piece on how shitty of a job Sheriff Keller is doing. Tbh this feels like a missed opportunity, because no one has written a think piece on Sheriff Keller’s abs, and that’s the real story here. Kevin is just like “you’re smearing my dad’s good name!” to which Cheryl laughs in his fucking face. Honestly, she’s not wrong. Sheriff Keller literally closed multiple murder cases based on the findings published in a high school newspaper. Please.

Back at the Cooper house, they’ve turned family dinner night into a hostage situation. And it’s like, have these people never heard of Taco Tuesday before?? Jesus. Just once I’d like to see this family do something fucking normal at the dinner table.

Veronica tries to pay off Nick without her Daddy’s black card. Lol let me know how that works out for you, girl. Oh shit, Nick wants Veronica to repay him with her vagina. That’s so fucking twisted and gross. I hope she brings Cheryl and the pig’s blood on their date and the three of them have a time.

Alice confronts FP about their past and Y’ALL THE PROM BABY IS FP’S. OH MY FUCKING GOD. You know how people who exercise get some sort of euphoric high after working out for a while? That’s how I feel after I’ve been proven right about a plot twist in a TV show popular among 13-year-olds.

And as if we needed any other evidence that The Black Hood is back, Betty’s phone goes off with that creepy AF ringtone. He’s convinced that Chic murdered her real brother and he wants her to deliver the sinner to him. Quick q tho, does he not consider Dark Betty sinful? Like, what constitutes as kill-worthy sins? Because this girl has stripped in front of an entire bar filled with old bikers, lived a double life on a webcam, and just genuinely enjoys playing in a good crime scene, but she’s cool with you? K.

Okay, I’m finding it v hard to believe Veronica is actually going to sleep with this scum bag. There’s no way in hell. She’s gotta have something up her sleeve here.

Archie escapes from his binds and it’s actually unbelievable. Seriously. I’d like to see the playback on this scene please. He races off to save Veronica, but she’s already saved herself by roofing Nick. Already. Saved. Herself. That’s beautiful, CW.

Betty decides to hand over Chic to The Black Hood because what 16-year-old girl doesn’t have a serial killer as a booty call? Ugh. If only my exes were as nice as hers.

The episode ends with Archie confronting Hiram about the fact that he wouldn’t pay his ransom. He’s like “don’t worry about it, I know I have to kill someone first before you’ll care about me!”

Remember when Archie just wanted to be a musician? And not a hit man? Those were simpler times. Well, here’s to another week of suspending reality for the sake of The CW’s ratings. See you betches next week!!