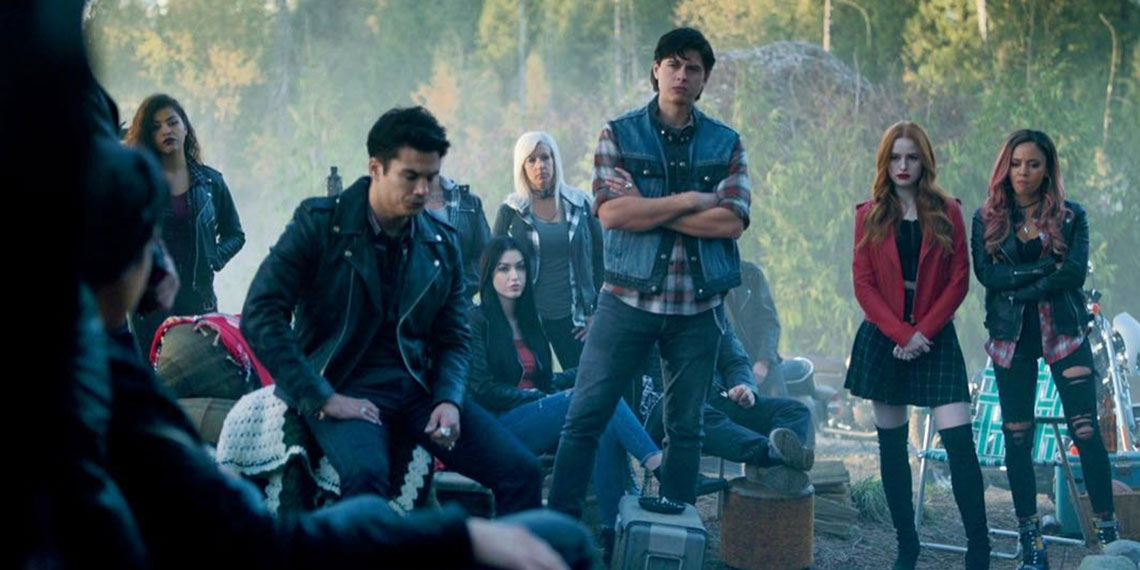 Welcome back, Riverdale fans! After a too-brief hiatus, the show we love to hate is back and probably more batsh*t than ever. I’m going into this episode with a little bit of trepidation because I’ve seen what the writers of this show can do with only one week to write material, so I’m downright terrified to see what they can come up with when they’re well-rested after a four week break. Case in point: When last we left off, Archie and Veronica had broken up, Betty had escaped the nunnery/insane asylum and, oh yeah, Hiram and his thugs QUARANTINED the entire town of Riverdale just for funsies. Again, I say, this is what happened when the writers were given one week to let their imaginations run rampant. I shudder to think what we’re about to watch on our screens. So let’s get started!

Lol I forgot Archie was running away to Canada. Honestly, I can’t fault him for it. With all the sh*t I saw in 2018, I’m one State of the Union address away from moving there as well. It looks like Archie fled the country at the right time, because things in Riverdale don’t look great rn. And by “don’t look great,” I mean this would qualify as a national emergency if the writers of this show wrote within the realm of reality, but okay.

At least the quarantine was lifted, even though no one is explaining why it even happened in the first place?? Like, I’ve swallowed every piece of bullsh*t @writerras tries to spoon-feed me on Wednesday nights, but this I refuse to accept. An entire town thrown into a Purge-like state at the whims of a drug lord?? They’re in the state of New York, for god’s sake! At the very least, PEOPLE magazine would be sniffing around for a cover story to exploit to the masses. Please!

Since the quarantine, Cheryl and “TT” have apparently taken up stealing from the rich to give to themselves but, like, isn’t Cheryl the richest person in that town? I thought her family’s maple syrup paid for the town to, like, exist? Just because you wear leather and found lesbianism doesn’t mean you’re one with the people, Cheryl!

Lest you forget where you came from, Cheryl.

Also, Veronica is now selling booze at her speakeasy. I guess she finally learned that sober people don’t spend as much money. What, they didn’t teach you that in business school, V?

Also, I’m confused. Is she selling the booze to her high school friends or is she only serving people of age? Who would come to a speakeasy populated by high schoolers with a penchant for wearing fringe and suspenders?? WHO.

Meanwhile, Betty brought the runaways from the Sisters of Quiet Mercy to her house. They’re all camping out in her living room, and Alice is surprisingly chill with this. She has legit mental patients sleeping on a mattress in her breakfast nook and she’s like, “As long as you feed them, Betty, and they don’t mess on the floor…”

JUGHEAD: It doesn’t make sense for Hiram to quarantine an entire town.

NO IT DOESN’T MAKE SENSE, JUGHEAD. Thank you!

Honestly, I’m so over this entire Hiram plotline. It’s the most ridiculous thing I’ve ever heard. First, Hiram’s big diabolical plan is to create more prison jobs, then he wants to turn an entire town into his personal meth lab. I ASK YOU: WHERE DOES THE MADNESS END. Kelly Ripa, please invest your money in some other show and leave ours alone. I’m begging you.

I love that all Archie needs is an L.L. Bean vest and he’s at peace with himself. Like, he is living his best cabin life, and I’m shocked things are working out so well for him. Whatever. I’m just glad the dog is still alive.

Wait. I may have spoken too soon here. Three seconds into Archie’s blissful cabin life he’s… mauled by a grizzly bear?? I’m sorry, but WHAT?? I mean, we don’t actually see the mauling (shame); we just see Archie looking shocked for a second and then the scene cuts to him radioing for help with massive cuts down his chest. All I have to say is, wow. The lengths The CW will go to to incorporate a shirtless scene for Archie where there should not be one is wild. I applaud their efforts.

Also, what’s the deal with the radios? Who is he even talking to? I thought he was supposed to be living off the grid! Who wants to bet that the person on the other end of the line is a hot girl? It would not surprise me in the slightest if that even in utter seclusion Archie has somehow managed to get laid.

Back in Riverdale, Veronica is just trying to run an entire bar and maybe show up to homeroom this week, but Hiram keeps f*cking it up. His thugs keep stealing her booze, and he wants her to hire him for protection. I guess in addition to commandeering entire town, he’s also taken up shaking down underage kids while wearing a fabulous fur coat. Jesus Christ. Kelly Ripa wrote this scene, I just f*cking know it. The fur jacket is her calling card.

Meanwhile, Jughead finds out that The Serpents are dealing Fizzle Rocks and he calls an emergency meeting in Riverdale’s version of Hooverville. Seriously, Jughead is using an abandoned La-Z-Boy as his throne. I can’t.

Fangs is like, “There’s no money coming in, how are we supposed to feed ourselves?” Um, IDK, maybe your parents?? Or, like, the government?? Like, he’s under 18. Surely this lawless town has some sort of system in place to protect unaccompanied minors? Also, I love that Jughead, who is literally the same age as Fangs, is doling out judgments and punishments over here. Like, Fangs, look around you buddy. You’re living in an abandoned field and taking orders from the president of the newspaper club. Please, dear GOD, just find a real adult already!

Cut to Archie, who is having some sort of fever dream from his extensive grizzly bear wounds. He wakes up to a room full of dead people trying to play boards game with him. He’s like “I’m hallucinating” and it’s like, no, the writers of this show are hallucinating if they think I’m just going to buy this bullsh*t for one more goddamn second!

THE RIVERDALE WRITERS ROOM: We’ll put Archie in a fever dream and set him up with a vision quest. It’s weird, but he’ll be shirtless. Fans will love it!
ME:

Veronica and Jughead come up with a solution to solve both their problems. Veronica doesn’t want to give her dad a single penny of her speakeasy money even though she lives under his roof and he’s probably paying her cellphone bill. Relatable. She decides to hire The Serpents as protection instead.

Jughead’s like, “This is so great now you guys will have a stable income!!,” and it’s like, okay, but HOW much is Veronica paying these people? Like, what do you mean “a steady income”? This bitch is 17! I was thinking like paying one guy $12 an hour and Jughead is making it sound like they’ll make enough money to cover Fang’s mom’s cancer treatment. Is she also supplying health insurance? How much money can she possibly be making serving mocktails and marketing a keg of Natty Lite as artisanal beer?

Before Veronica can hire any Serpents, she wants Jughead to get back the v expensive egg Cheryl and TT stole from her dad, which is like the richest request I’ve ever heard. Cheryl doesn’t want to give the egg back, though, because she needs it to keep the lights on at her mansion. Lol k.

CHERYL: I’m not afraid of Hiram. What’s he gonna do? Call the sheriff? There is no sheriff!

Out of the mouths of Cheryl! Riverdale is a godless town.

Jughead banishes Fangs, Cheryl, and Toni from The Serpents because they’re sullying the Serpent name with their criminal behavior. K. So, let me get this straight. They get to leave the tent city and not take orders from someone who just started shaving last semester? I mean, who really won here?

Lol Archie’s vision quest wants him to play more guitar. There’s no doubt in my mind he’s going to use this whole experience as material for the next school talent show. God help us all.

The gargoyle gang attacks Veronica’s shipment again and it’s all very Robin Hood. Like, is that a wagon hauling their booze down that dirt path? They are aware that this is the 21st century and they can use, like, the highway to get places, right? Also, this is so extra, even for Veronica.

After defeating Hiram’s thugs, Jughead declares that “Riverdale hasn’t fallen yet” and I absolutely beg to differ. Riverdale has fallen somewhere very dark and I’m scared to follow. Someone please save this show from itself.

Meanwhile, Archie is still struggling with his vision quest. He’s realizing that the only person responsible for his banishment to Canada is actually himself. Not Hiram or the Black Hood or the diabolical teen fight club, but his own ignorant self. Is this the part where we hang him in the town square? Because that’s the first plotline I’ve supported all season.

ARCHIE: I have to destroy the part of me that’s stupid.
ME: I guess we’re going to be here for a while then.

Back in Riverdale, Veronica is out eye-f*cking Reggie as she headlines her own club. I guess she can’t spring for entertainment anymore if she has to pay for an entire gang’s health insurance. Also, does anyone else feel like this whole Reggie/Veronica storyline was only created because they started dating in real life? This feels extremely random to me. Veronica and Reggie start making out and the camera cuts to Archie who’s…dead?? Like, WHAT. Some cops bust into his cabin and find him deadass on the bed.

Wait that was actually real? Are pigs flying? Have my prayers been answered? ARE WE  REALLY DONE WITH ARCHIE? On the one hand, it’s everything I’ve ever asked for. On the other hand, if Archie’s not there to screw up a murder investigation or sleep with the first woman who gives him attention, what will I have to talk to about??

Well pals, I guess we’ll have to wait until next week to see if Archie’s actually dead. I’ll hold off on the bubbly until then. Let’s just pray next week is less of a snooze, amiright?