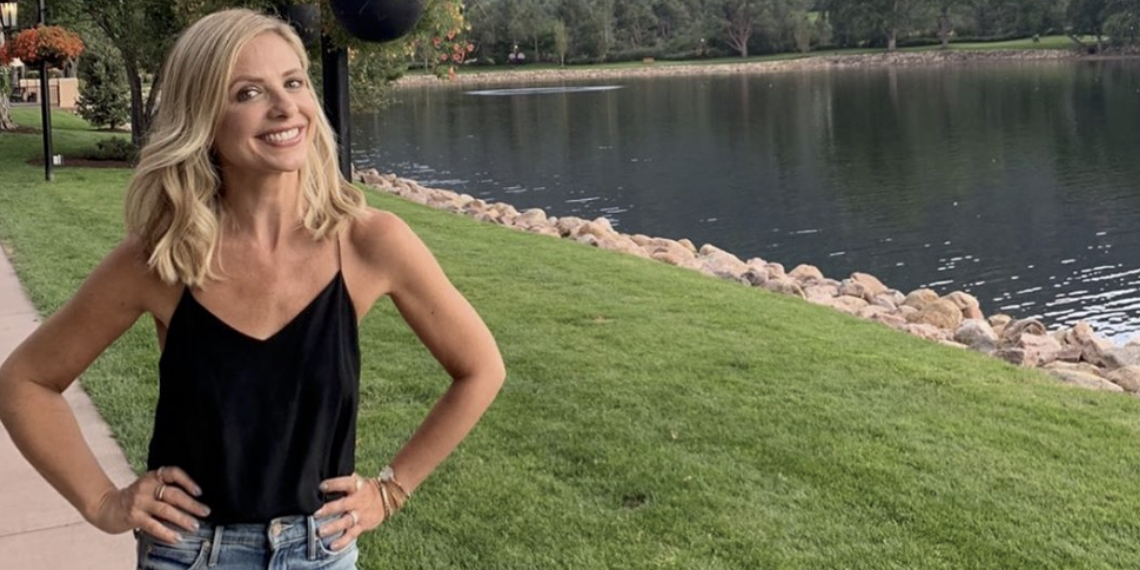 Photoshop Fail Of The Week: Once You See It…

For this week’s edition of Photoshop Fail, I was submitted this photo by a reader (@maggievoelzke). And it’s pretty funny because it’s one of those pics where you’re like, “What? This is totally normal”…until you see it. The Photoshop Fail this week features someone I never wanted to have to come for. Sadly, it’s the ones we love and think are least problematic who end up hurting us the most. I think. Sarah Michelle Gellar was a pillar of 90s teen fandom. My 7th grade crush told me she was the hottest girl alive. This was soul-crushing, because we could not have been further apart in appearance. She was like twenty-something, blonde (at the time), gorgeous hair, perfect body, etc.

Meanwhile, I was like 12, somehow chubby and gangly at the same time, and brunette with tragic chunky pink highlights like Aria in Pretty Little Liars. l didn’t know how to straighten my hair correctly, so it was straight only in the front and had weird ridges in the back. It also felt and looked like straw because I got it chemically straightened (it did not work except for frying my hair—good times). It was also the time of super low-rise huge pants and baby tees. So I was constantly pulling my humongous pants up, and my teeny top down. Oh, and I had a retainer. I could not have been further from SMG. It was the worst. Honestly I can’t believe I’m telling any of you this because it just serves as material for future blackmail.

So anyway, SMG has failed to age in the 15 or so years since ruining my life—or at least, the 7th grade dance. She still is the blonde bombshell that could seriously still pass for a twenty-something in a teen movie. So because we know she’s still super fit, beautiful, etc., when she posted this picture, it’s entirely believable.

Colorado you are pretty. “Traveling is about finding things you never knew you were looking for” #colorado

She’s not giving herself a totally new face. She doesn’t look super airbrushed. I very much believe she looks pretty much exactly the same IRL. But then. Do you see it?

Do you SEE IT?

SMG has one really big arm. Like, her other arm looks almost unnaturally thin, but she is super thin and it’s angled out in classic Skinny Arm (TM) pose. But then…what happened to the right arm? It’s literally double the size of the other arm, and maybe half of her waist? And if you’re thinking, “it could be the perspective of the camera”—okay, so why is her bicep the same size as the other arm, but her forearm is massive?

Sooooo, how does this happen? I mean, either she masturbates A LOT, or there is some *poorly done* Facetune to blame. You can stretch an arm like that, particularly if you’re trying to make your waist look smaller. You push the waist in, and the arm goes with it. Here’s a more extreme version just to show you:

I didn’t clean it up or anything, but just so you can see, as I dragged the sidewalk into SMG’s waist to make it even smaller, the arm went with it, making it larger. A retoucher who knows what they’re doing would go in and erase out the arm to the original size. BUT, then they’d be left with the task of redrawing the arm to connect with the new hand placement and fixing up the background. This is more complicated, so I can see why SMG just left it. But what I don’t understand is why she’d edit herself in the first place. She is like the poster child for aging gracefully!! Ugh.

If you still can’t see the problem with the arm, maybe this will help you. I sized the giant forearm to match the arm on the other side:

These are the correct proportions, assuming her arms are really that thin IRL and weren’t also edited (I have my suspicions). Also, I didn’t bother fixing the hand so yeah, it’s a little anatomically wonky. But do you see the difference? THAT IS A HUGE ARM. It’s also very suspicious that stretched arms often go with manipulated waists (as seen above).

And again, I would believe it was a perspective thing, except the bicep is the same size as the Skinny Arm™, and also, the only way it could appear so much bigger is if it was coming toward us. Like if she was putting her arm out toward the camera, then that would justify the big size. But like, that forearm is attached to the elbow, meaning it’s kinda locked in on the same plane as the shoulder and rest of her body, none of which is warped. She also is not thrusting her shoulder forward. There is just no justification for that huge arm except lies, deceit, and tampering. Oh, except masturbation, I guess we can go back to that.

SMG, you’re still hotter than me even though you’re 42 years old. You don’t need to edit your waist down. NOBODY NEEDS TO EDIT THEIR WAIST DOWN! I feel like I’m banging my head against a wall with these columns.

Did you spot the fail immediately in this photo? Do you think it’s a freak perspective thing or that SMG messed with her waist? Let me know and keep submitting your fails!