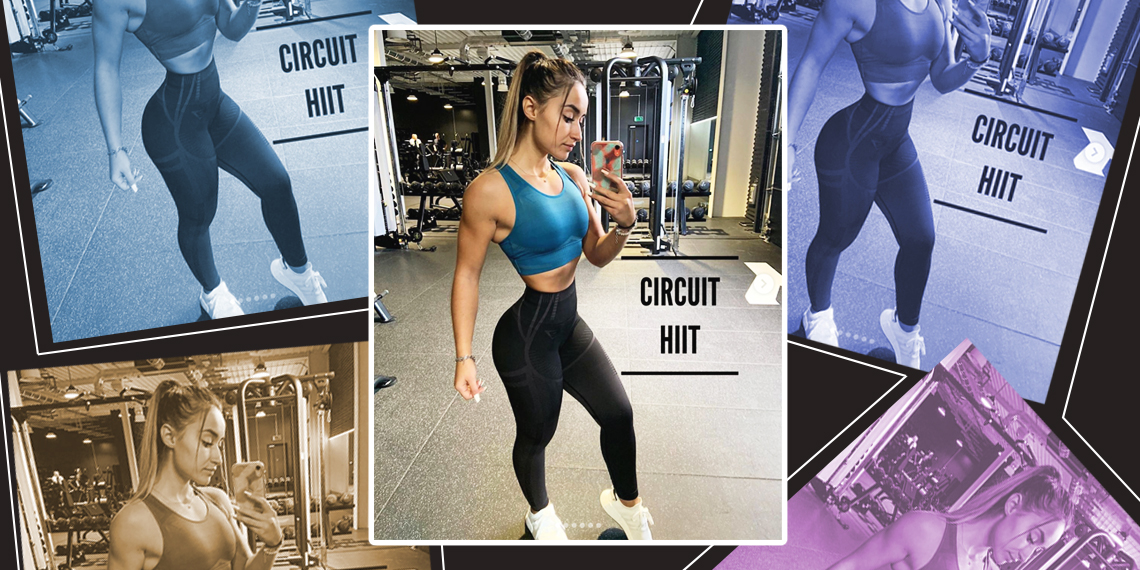 I don’t know if you guys have ever shopped at Gymshark, but I’m obsessed. It’s a really cute athletic brand, everything is super flattering, and their sales are fire. This isn’t even sponsored but hey, Gymshark, if you want a cancer patient that can’t even work out right now to advertise for you, hit me up. I’m just the epitome of health. Anyway, so I follow their Instagram so I can know about sales and see cute new styles, and also because they always post the most fit people ever as fitspo. Back when I wasn’t a professional chemo potato, I would see a post by them and think, “well f*ck, I should probably hit the gym.” Effective advertising at its finest.

They even have an Instagram dedicated to training, so you can see new exercises and how to do them. Highly recommend. But here’s the thing, most of Gymshark’s posts feature people like this:

Like, everyone is obviously fit as F*CK, but reasonably so. I mean, if I went to the gym for six hours a day and didn’t eat carbs, I could look like this, too! I would never, because that sounds hard, but it’s the idea that anyone could be fit. This is how you advertise fitness, not with scary skinny Photoshopped models that don’t even have room for organs. I thought Gymshark always did a great job of that. UNTIL.

This disaster showed up on my feed:

I mean. WTF is this shit? How does a fitness brand not see that there is something wrong with this picture? I get that when you’re really fit, your waist gets teensy, but this is beyond believable. Not to mention, this is such a tiny waist it’s not even aspirational, it’s just scary.

Also? The grid lines in the floor are warped/disappeared riiiiiight near her waist. So weird when that happens. And if you need more convincing this is not real, the following pictures are screenshots from videos of the same model working out:

I mean, she is obviously in awesome shape, but I can’t help but notice that, in the videos, she clearly has a waist that like, actually exists. And she can fit ribs and organs in there! The mirror picture is not even close. Also, if I looked like that, I can assure you I wouldn’t edit anything ever. I’d be wearing very tiny crop tops and making everyone count my abs. Good thing I despise running and love french fries, otherwise I’d have no friends.

This GIF doesn’t really work since I couldn’t get her in the *exact* position, but you can clearly see that there is zero possibility this the same waist at a different angle:

Really like how they kept her chest and butt the same but gave her one-third of a waist. It’s one thing if this were just some random Instagram model posting a picture like this, but I find it very disappointing that a FITNESS brand on their TRAINING Instagram didn’t look at that and say, “hey, that’s clearly not a realistic body and it’s toxic to promoting FITNESS to pretend it is.” Gymshark, I expect more from you.

In other news, Kim Kardashian is at it again with the Photoshop (shocking), but this time it was done well, with purpose, and she actually admitted to it.

I actually really liked this photo, it’s so undone compared to the old days of Kardashian cards that seemed like an all-day photoshoot nightmare, especially with their 17 kids. This is relaxed, comfy, casual, and I think way cuter. However, Kim came out to admit that North actually had a huge tantrum the day of the photoshoot and refused to be in it, as kids often do. So she was added in via Photoshop later. Look, this is a great reason for Photoshop. Kids suck, especially when you have to wrangle an entire litter of them. I think you’ve got to just take what you can get and do whatever’s easiest. The good thing about this photo though, it wasn’t the disaster Photoshop job that was the Halloween pic, with Chi looking literally cut-and-pasted on collage style. It was properly done, you can’t really even tell, and I like that Kim openly admitted it, because kids are hard, even when you’re rich and famous. For once, her Photoshop use was for good, not evil. She’s growing up! Maybe. I’ll have to wait and see on that.