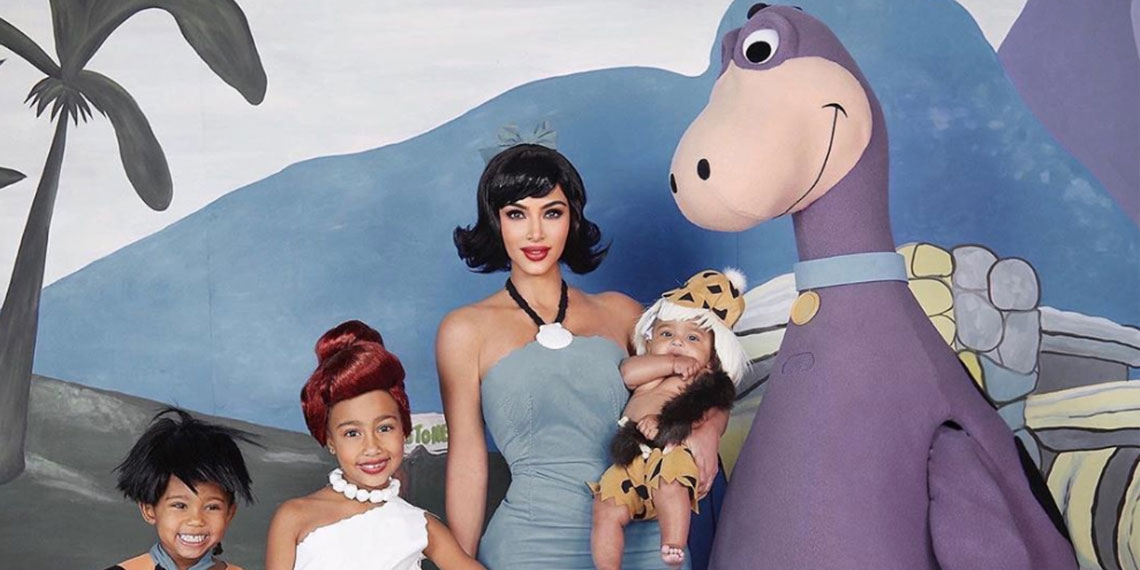 Photoshop Fail Of The Week: When You Should Fire Your Retoucher

Guys, sometimes I have a hard time finding good Photoshop fails. Like, everyone uses Photoshop or Facetune, and sucks at it, but it’s not fun unless there is some egregious error that we can all laugh at together. But every now and then, the universe pities me and just hands me the perfect image on a silver platter. And with that, I bring you Kimberly Noel Kardashian West. Like, the Kardashians honestly own these articles. They are by far the worst Facetuners and body modifiers we’ve ever seen. But despite their giant asses, tiny waists, giant eyes, airbrushed skin, warping vortexes, melting walls, crooked floors, even they can hit a new low. And that came this week in the form of a Halloween picture.

So, Kim K had a bunch of costumes this year. My favorite was her Legally Blonde video, which is nothing short of iconic.

Then they did this weird random alien thing:

Saint is like, “get me out of this family.”

They also did this, and I don’t know what’s going on here:

Also, why is Kanye exclusively wearing full GIANT bodysuit costumes now? It just seems super aggressive and hot to wear when it’s 90 degrees out, which it was all month here in Southern California?

But then they had a super cute idea where they’re all Flintstones characters. Also did you guys know it was FlinTstones? Because I swear, I have been saying FliNstones for my entire life and I had no idea there was an extra T in there.

This family pic was such a challenge because Chicago was so scared of Dino! LOL We tried to explain and show her that it was just daddy but she didn’t get the concept yet! So shout out to the photographer for editing her in & making our family Flintstones dreams come true!

I actually LOVE these costumes. This is a super cute idea, I love Kim as Betty (except WHAT the f*ck is her waist size?), the kids look great, and my only issue is Kanye as Dino, which is the stuff of nightmares.

But whatever, aside from that, it’s a great costume idea. I don’t even like kids, but I will say Kimye’s brood is actually really cute. UNTIL. UNTILLLLLL.

Kim admitted in the caption that Chi was so scared of Dino (I’m with you there, sister), that her photographer edited her in. She even shouted it out. As if he did a good job. I mean… WHAT? Who is this photographer? This is literally the worst edit I have ever seen, ever. Like, they just used the soft brush erase tool, erased her out in 30 seconds, left all the edges fuzzy, and slapped her in??? KIM, WHAT are you paying these people for this sh*t? The lighting doesn’t even match. The size doesn’t even match. That kid is gigantic compared to her siblings, and she’s the second youngest. Are you kidding me?

Also, her POSE doesn’t make any sense? She is clearly sitting on something, but it’s not the ground. The perspective doesn’t match. She doesn’t even have a shadow. What, is she a vampire??? Wait, actually, do vampires have shadows but just don’t have reflections? I should ask Kim, she seems like she’d know.

Kim, this is a garbage photo edit job. You can afford to get a decent retoucher. This isn’t even a hard problem to fix. All you’d do is position Chi with the family. Then take a photo of Dino the Monster by himself in the correct position. And splice them together. SO EASY. A basic Photoshop 101 class teaches this. Who. Are. You Paying. For this garbage?

Also, I can’t believe any photographer looked at this photo and said, “Yep. Looks amazing.”

But at least I can thank you for the laughs, because yikes.

Did you see how insane this photo is? Have you ever seen such a sloppy edit in a “professional” photo? I feel like the entire photo is ruined by this—like, you can’t unsee it or focus on anything else. I also think this is just proof that their photographer sucks at retouching in general. See you next week!