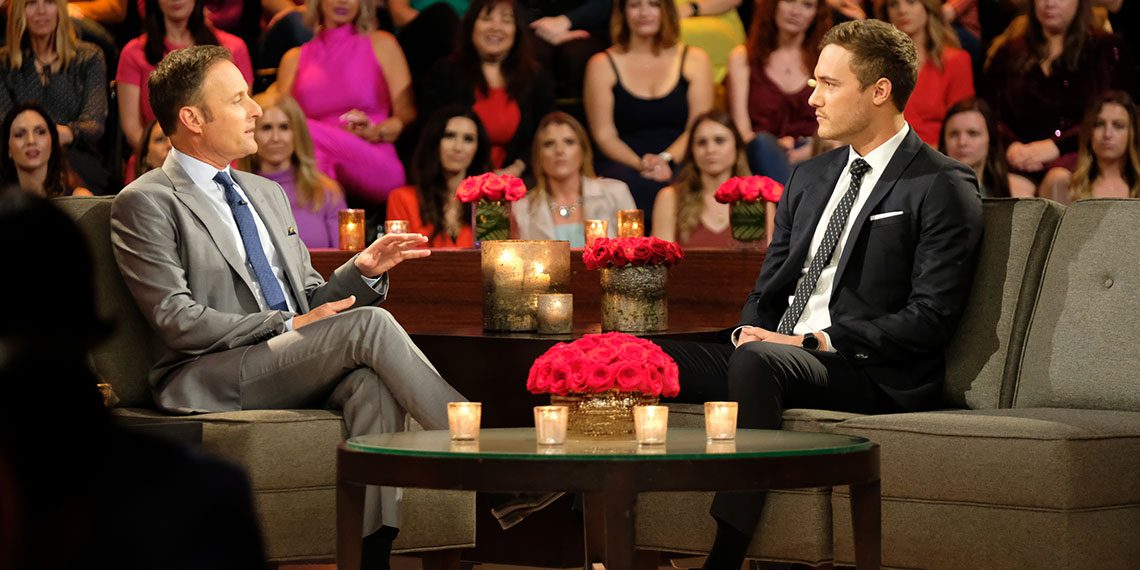 Peter Deserves To End Up Alone After ‘The Bachelor’ Finale

On Tuesday night, after months of subjecting viewers to his fetish for barely-legal feuding beauty queens and a gaping head wound that got more infected by the minute, America’s least favorite pilot, Peter Weber, picked his winner. Well, more accurately, he proposed to Hannah Ann, she said yes, and then he proceeded to dump her on national TV on the same unfortunate day she ran out of shampoo. It was as brutal as it sounds. Then he tried to win Madison back on After The Final Rose, and they both admitted they still have feelings for one another, and are going to take it one day at a time. Wow, just when I thought things couldn’t get more romantic than a Revolve fashion show! As of right now, it looks like Peter and Madison might get back together, but I don’t think that they should. In fact, I think that Peter deserves to end up alone. You may think that’s harsh, but you should really hear what I say about myself. This is me being kind to Peter! But don’t just take my word for it, let’s look at my reasoning.

First, the way Peter treated Hannah Ann was atrocious. He didn’t tell her that she was the only one left until halfway through HIS PROPOSAL OF MARRIAGE WHEN HE SPOKE MADISON’S NAME, and made it seem like he actually wanted to marry Hannah Ann, rather than the truth, which was that he was just too ashamed to salsa his way back to his parents’ basement alone. Then, while they were engaged, he told Hannah Ann he needed to contact Hannah B for “closure.” If by closure you mean a hand job while she cries on your lap, then sure, I believe you need closure, Peter. Peter also couldn’t stop being conflicted about his lingering feelings for a certain sparkling apple juice drinker back in Alabama, while engaged to Sonic’s BEST roller skating model! Do these sound like the actions of a man who deserves a happy ending to you? Or does this sound like a man that I should give up my $200/hour therapy session to? It’s all yours, Peter! One time offer!

Peter, a grown-ass man, also spent the season being coddled by another grown-ass man, Chris Harrison. After Peter dumped Hannah Ann, the showrunners forced Chris to earn his paycheck Chris took it upon himself to approach Madison about a second chance, and you can tell by his reverent tone that Chris takes his job as a wingman to a 28-year-old walking erection much more seriously than he takes his job as a mediocre TV host. He tells Madison that in Peter’s dreams he’s with her, and it’s like, well Chris, in my dreams I’m riding a hippogriff off into the sunset with Draco Malfoy, but that doesn’t mean it should happen! It’s because of Chris that Madison agrees to see Peter, and not because Peter is so desperate to see her!

It did give us this moment though, so I guess I can forgive Chris just this once:

So Chris is the one that set up Peter and Madison’s reunion, and if it wasn’t for him, would Peter be sitting on that stage alone? It’s not like he took the initiative to get her back! In fact, I’m not even sure that they want to be together—neither has posted about the other on social media yet. And if they can’t even be bothered to post a picture on Instagram nuzzling each other’s shoulders and captioning it “So lucky to be in love with my best friend!” IS IT EVEN WORTH IT?!

And finally, even Peter’s mother thinks he should end up alone at this point, and who am I to argue with Barb, whom I have no doubt would unleash the wrath of 1000 rabid bats on me if I dare disagree? I know a lot of you HATED Barb based on how much you came for her in the comments on Ryanne’s recap, but I think she was right about Madison. The minute she mentioned that Madi made them wait three hours to meet her I said to myself aloud in my empty apartment, “f*ck you and the eyelashes you rode in on, basketball girl” because there is nothing I hate more than waiting. I even downloaded the Disney fastpass app in the off chance I ever go there again. I also appreciate that Barb has no shame sh*tting on her own son on national television for his bad behavior. She is a gem, worth more than ten of Neil Lane’s gaudy mall diamonds, and we were blessed to have her even if it was for a little while. So, if even the woman who sacrificed her body to give birth to his indecisive ass thinks that he’s making the wrong decision, perhaps it’s time for him to take a break from dating.

I know this is a hard opinion to hear, but it’s not like I’m saying Peter should DIE alone or anything (my editor wouldn’t let me), but I do think it would be prudent for our Bachelor to take some time alone and figure out what he’s looking for. Either that or just marry a f*cking plane already, you know that’s what he really wants.