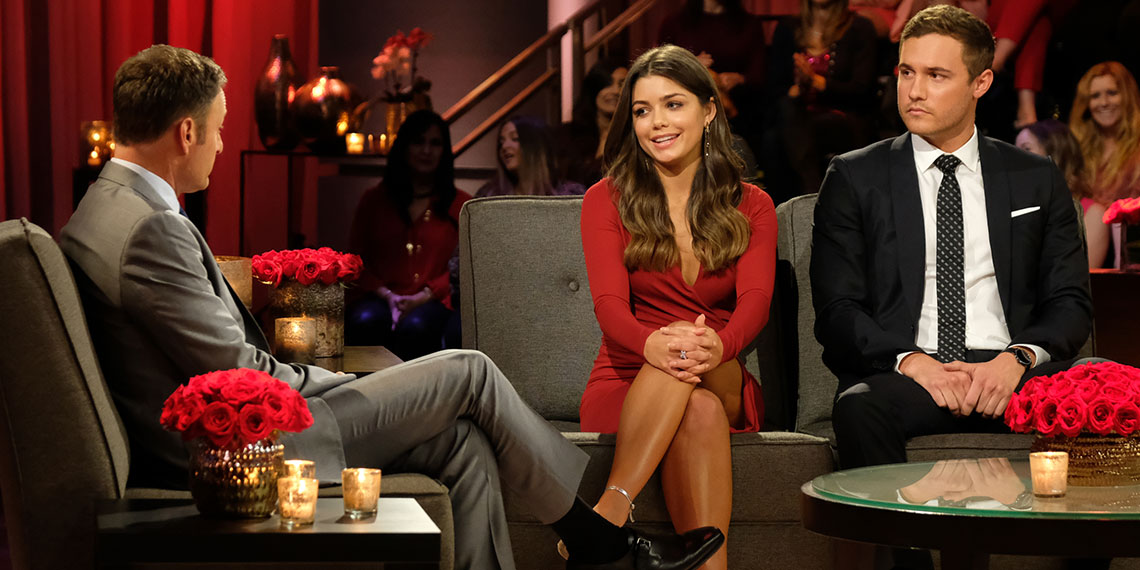 Good morning, Bachelor Nation—that is, everyone except Peter and Barb. I’m sure you’re all still reeling from last night’s finale, which somewhat succeeded in being unspoilable, but equally succeeded in being totally anticlimactic. Like, if I wanted to commit to 10 weeks of seeing the same people, only for them to end up going on one date after this, I’d just redownload a dating app onto my phone. Now, PLEASE DO NOT READ AHEAD IF YOU DO NOT WANT SPOILERS. Tbh, I feel like after a show airs live, there is no such thing as being “spoiled” anymore, but some of you have jobs/can’t watch The Bachelor live/are sensitive, so consider this my due diligence.

Last night, Peter took a page out of Arie’s playbook and dumped his final pick (Hannah Ann) to get back with his runner-up (Madison). Ya hate to see it. Hannah Ann, despite not being old enough to legally rent a car yet, surprisingly handled the situation with a hell of a lot of grace and maturity, which is more than I can say of every murder plot I’ve devised in my head for the strangers on the subway (whom I will never encounter again) who take their sweet-ass time boarding the train, knowing full well that there is a sea of people behind them, and the doors close in three seconds. Anyway!

Hannah Ann appeared on the Bachelor Happy Hour podcast with Rachel Lindsay and Becca Kufrin to talk about the ending to the ~most dramatic season ever~ (it may have finally lived up to the hype this time), and oh boy, did she hold back no punches, especially towards Peter. She also spoke about #ChampagneGate, the Finasco Fiasco, and of course, why Peter ain’t sh*t (my words, not hers).

By now I think we all realize that the infamous champagne theft was completely producer orchestrated. “I was completely blindsided by it and I didn’t know how to handle it,” Hannah Ann tells Becca and Rachel, adding ,”in the end, Kelsey and i were able to put aside our differences and become friends.” Hannah Ann claims she was trying to be as logical as possible and be like, “hey I didn’t steal your champagne,” but that came off the wrong way to some viewers.

Hannah Ann jokes about her whole finasco slip of the tongue, saying, “In the moment I said that, and I had no idea that I even like, spoke. That’s not even a word I had used in the past, I don’t know where that came from.” Honestly, been there literally every time I record a podcast. (Maybe I should see a doctor?) But then Rachel asks Hannah if she does, in fact, know the correct word, and it basically goes like this:

So does Hannah Ann know the actual right word for fiasco? The jury’s still out on this one…

Hannah Ann claims she had no idea about Madison’s ultimatum (which she doesn’t necessarily even consider an ultimatum, saying, “she was doing what’s best for her”), and assumed she and Peter had talked about their values before the Fantasy Suites. She says, “I knew she had certain lifestyle values that didn’t line up with Peter’s, but I assumed they’d had the conversation before.” Ya, like kind of how we all thought that certainly you wouldn’t wait that long to spring something so crucial on someone. But alas, we were all wrong!

She also says she was taken aback by the whole situation, but didn’t really want to focus on it too much, because, “I was just wanting to focus on me and him and not let anything distract me from that.” You can say what you want about Hannah Ann, but from the beginning, she was focused on one thing and one thing only: Peter. Even when it earned her Luke P comparisons. The girl is focused.

Love to see it. #thebachelor

Now, this is the part where things start to get good, and in the same vein, where Peter starts to get shady. Grab your kettle, the tea is being warmed up. (Sorry.) Hannah Ann says she had no idea that Madison had left early, and that Peter totally minimized how unsure he was going into his engagement, as well as his feelings for Madison.

“It was completely downplayed,” she says. “He didn’t give me the courtesy or respect to have a sit-down conversation: hey this is what’s going on with me, this is where my headspace is at, let’s talk this through.” She says that Peter “just told me that very quickly and downplayed it and then immediately went to ‘but my heart chooses you, you’re the love of my life, I wanna spend forever with you.'” And, I mean, we all saw how he began his engagement speech by saying “Madison”. This tracks.

We all totally thought he pulled a Ross Geller for a second, don’t even lie.

Listening to Hannah Ann’s interview (and yes, I’m taking it with a slight grain of salt because hindsight is 2020), I’m impressed with how perceptive she seems to be. When asked why she took so long to get to the rose ceremony, and almost didn’t show, she says, “My instincts were telling me I wasn’t getting all the information I needed to make a decision with Peter.” Hannah Ann may be not a girl, not yet a woman, but in this case, the woman’s intuition was spot-on.

She admits, “Should I have stayed on that bed in Australia? Absolutely. But I wasn’t going to give up on someone that I loved, and the last words he told me on our last chance date was that he was going to make the best decision for both of us, and to trust him.”

Hmmm, where have I heard that before? Oh right, every relationship with a f*ckboy I’ve ever been in. *Slaps self across the cheek* You’re right, this isn’t about me.

She says that, “I think in the end he took advantage of the fact that he conveniently left out very important information prior to me making a commitment with him.” Basically, Peter wasn’t honest about how conflicted he was feeling, but rushed ahead with the engagement anyway. I know there’s a ton of pressure on the show to propose, but it still wasn’t fair to Hannah Ann.

Hannah Ann adds, “He downplayed his feelings towards Madison completely, and even after our breakup he couldn’t really own up to it.” Apparently, Peter went so far as to reach out to Hannah Ann’s parents, but only to say that “basically he was struggling processing all his emotions.” Umm, yeah, I’ll say! That’s like saying you have a little case of the sniffles when you really are coronavirus patient zero. Hannah Ann says of Peter’s excuses to her parents, “It was very vague. He speaks half-truths. And so while I’m watching the season I’m like, why we broke up makes a whole lot more sense, because he couldn’t really own up to how he was truly feeling.”

This is, apparently, a common theme with Peter. A guy who gave up his career to compete for fame on a reality TV show, shady? Well, I never!

On The Timing Of The Breakup

Basically, Hannah Ann and Peter stayed together through January, but when the season started airing was when their relationship began to unravel—not coincidentally, because that was when Peter’s half-truths started coming to light for the nation (including Hannah Ann) to see.

She says, ” beginning of January was when he approached me that he needed to speak with Hannah Brown. That’s the first red flag. He told me he needed to talk to Hannah Brown because he needed closure and was trying to convince me I should feel comfortable with that. And I’m like, why do you need closure?” What Hannah Ann didn’t know at that time, was that Peter needed closure because he low-key invited Hannah B. back into the Bachelor mansion. Hannah Ann says before that, she’d never known about the group date, or seen Hannah B. ugly cry on the couch. But once she watched it, it all made sense.

Peter never did get that “closure” because about a week later, he and Hannah Ann broke up, which was at the very end of January. The crazy part about it is that Hannah Ann says, “We actually had talked that morning that we weren’t gonna break up, we were gonna work through it.” Yikes. I mean, at least Peter didn’t follow her around a house trying to browbeat her into forgiveness, but this is like, only marginally better.

We love you Hannah Ann and all of your random modeling jobs🌹 by: @dylanhafer #thebachelor

Hannah Ann reiterates, “Peter does not own up to the full truth—just like on our engagement day. He knew that if he told me the full extent of where his heart and head was at that entire week, he knew that the outcome would have been different. He knew that when we sat down and had an open, honest conversation, my instincts would have picked up on that he was not ready for a commitment. And that’s not what he wanted.”

Yeah, Peter just went full steam ahead because he wanted to put that ring on somebody’s finger, identity be damned.

In what might be my favorite quote ever, Hannah Ann says that Peter “was consistently inconsistent.” I love it. The accuracy. The poetry. The parallel structure. I’m putting this on a sticker. Honestly, Madison, good luck.

There is a light at the end of the tunnel for Hannah Ann, though. For one, she’ll absolutely kill it on Paradise, and who knows? Maybe four years from now, ABC will tote her out of the shadows to make her the Bachelorette. But she does say that Peter’s f*ckery “really helped me move forward because I deserve more than someone half-loving me. I deserve 100%.” Claps all around. Hannah Ann deserves the world, or at least, a Revolve modeling contract.

If you made it through this absolute novel, congrats! To hear more of what Hannah Ann said, listen to the Bachelor Happy Hour podcast below.