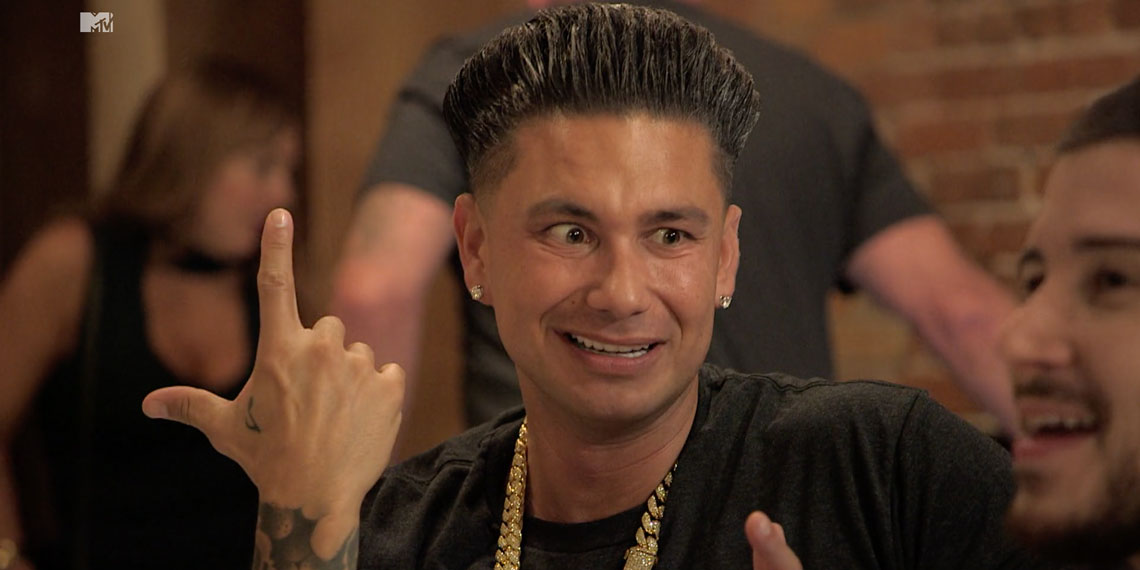 After Thotchella and the Bromitment ceremony, I would think we’d be done here, but this season is never ending because we’re going back to the OG Shore.

The guys wake up super hungover and they seem like they are dying. I get exactly like this when I have two glasses of Chardonnay. Oooh, I forgot they had those paid escorts random girls that were super into them over last night.

Mike then called his fiancée, Lauren, and told on himself. She flipped her sh*t (fair) and told him to get his ass home before she beats him to plan the wedding.

Vin and Pauly are bickering about the proper way to pack. Pauly is already talking about Bromitment Therapy. Guys, it’s been a day, get your sh*t together.

Jenni goes to meet Angelina. Why?? Can’t we just agree Angelina sucks and stop inviting her places? Like it’s super easy guys, just dump her. That’s what I do to everyone. They must be really paying Snooki a good amount to literally force Angelina into our lives. Snooki never even liked her either!

Ang is basically like, “oh you guys are all friends and don’t like me.” Duh. Jenni is like, “yeah, you just showed up and then called me a whore.” Then somehow they’re hugging against Jenni’s will.

Jenni: I’m introverted and weird and don’t like hugs.

I have extra sympathy for Jenni now that we know she’s getting divorced. She just seems like a miserable person who totally let herself go, which is what happens to all of us in a bad breakup.

Jenni, but not as chic:

Mike goes home to Lauren and she immediately fat shames him and forces him to weigh in. Mike tries to blame Vinny for his weight gain. K. Can I blame Vinny for my weight gain too? Hearing him talk about keto makes me crave carbs.

Vinny goes home to his mom and tells him that he got married to Pauly.

Pauly and Ronnie go home and go to some kind of SoulCycle. Of course they do. Then, because it’s Ronnie, we have to talk about how he’s a father. Pauly says it’s his fifth Father’s Day having a kid, and then he says how important his kid is. TBH I forgot he had a kid because he literally NEVER TALKS ABOUT HIS KID AT ALL.

Ronnie tells Pauly that he is not single Ronnie. Are you. Are you kidding me? Can I call social services myself? How, HOW is Ronnie back with Jen? How can his standards be that low? She literally physically assaults him and acts like a psycho and hit him with a car. Who is he turning down?

Snooki and Jenni go to see Deena for a girl’s night but for some reason, Snooks is calling her “Deener” which is gross and I want it to stop. Oh wait, it’s not really a girl’s night, they meet up with all the guys at dinner in Jersey.

Deena: Do you guys want to see my sonogram?

Deena forces them to look anyway.

Oh please, it doesn’t even look like anything. It’s a cloud on a screen! I hate baby people.

They all start talking sh*t on Ron, which is the moment I realize Ron isn’t here. I should have noticed no one is crying about babies or abusive baby mamas.

The gang decides to call Danny and ask to stay in the house. As if they didn’t plan this a year prior and pay Danny a zillion dollars for it. Snooki says she’s inviting Angelina. Uuuuuuuuuuuuugh.

Omg, so awkward, they do a flashback to the last time they left Jersey. Jenni is crying and saying her life is “perfect now” because of the Shore since that’s where she met Roger. Great memories.

Lucky for Jenni, that’s overshadowed by a montage of headlines about Jen’s domestic battery arrest and the car-running-over incident. Okay, so I guess that hadn’t happened when he took her back the last time. But Ron, look what she did to your innocent TVs. Obviously, it was going to be you next.

They’re all on their way to the house and even Deena is coming despite her pregnancy. Ang goes to pick Snooki up.

Angelina: Leaving the house the first time was the biggest mistake of my life.

Yeah, no sh*t, they all have careers because of it and you don’t.

Mike and Vin are driving together talking about how they don’t know if Ronnie is coming because he was dragged by the car yesterday. I mean, he should, because he needs to run away from that psycho. But also, please don’t, because I’m so sick of his whining.

So everyone just continues to talk shit about Ron and saying they don’t want him to come. Glad we’re on the same page, guys.

TBH I didn’t know they were even allowed back at the Shore? Wasn’t this a thing at some point?

Angelina has literally the exact same hair I had in 7th grade. Snooki brought Crocadilly back to the house, which I’m pretty sure is considered abusive parenting after what happened to him last time. She also brought the duck phone back. Angelina is all bitter because she doesn’t “remember” anything, and like yeah, f*cking duh, because you weren’t there.

Deena: I was in the Jersey house more than like, it’s more my house than hers.

What kind of weird competition is this?

Vin says something real suspect about Angelina. He’s like, “oh I hate her but like you can pick on her and she’s cool, but I hate her.” Like, Vinny may as well have confessed his undying love for her for how weird that was. I’m repulsed. Vin, it’s real obvious you want to smush her. Again.

Now there’s a montage of Jersey Shore patio memories. Like, remember when you guys were fun? OMG, they’re showing footage of when they first met and Sam was there (rip) (okay not really but pretty much) and when Mike was in shape.

Angelina: Everyone thinks Vin and I are going to f*ck.

Pauly and Vin are in their old room on their tiny leopard print twin beds and the room is literally like a small, ugly closet. They’re like “oh did the room get smaller?” Like, no guys, you got richer.

Angelina is now complaining that Vinny pretended not to know her. AND THEN, she reveals that they f*cking went to high school together. And live a block apart. Like, how did Vinny pretend he didn’t know who she was?

Vinny: Angelina is like the Loch Ness Monster. Like, I’ve heard of her, but I’d never seen her.

All of this is awkward.

So then, Ronnie calls and says he’s not coming. Bummer. And by “bummer”, I mean, “Oh Thank God”, because I’m sick of his sh*t.

Vinny: What a… drag.

Vin. Now is not the time.

I’m so glad to get some Jersey Shore without people crying about babies and domestic abuse. Bye Ron, don’t come back, k thanks.