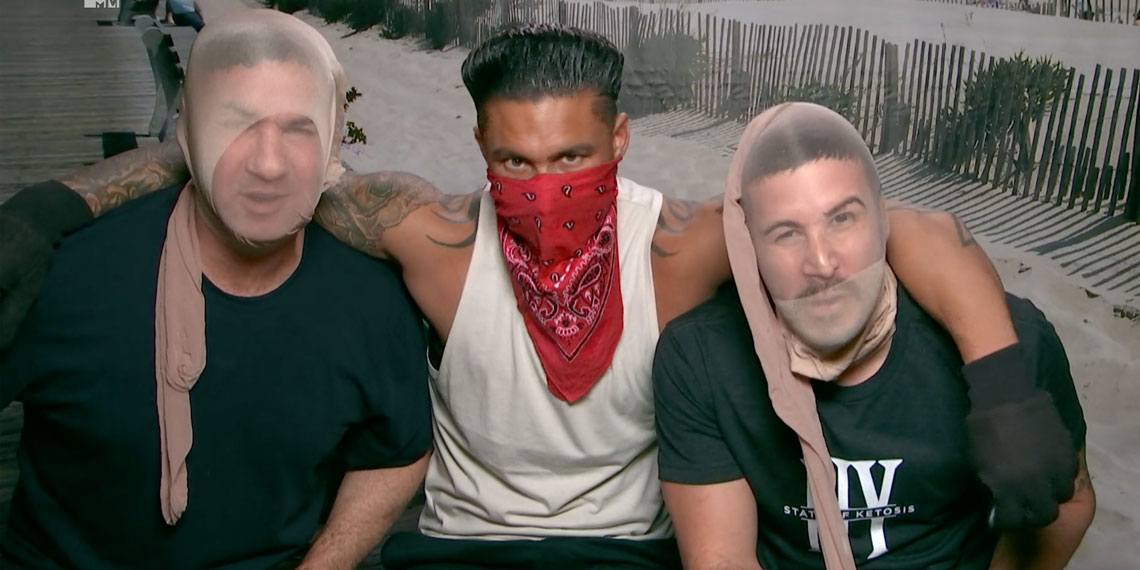 ‘Jersey Shore Family Vacation’ Recap: Do You Have No Bra On?

We left off last week (two weeks ago?) of the neverending season of Jersey Shore: Family Vacation with Vin and Ang having horrible sexual tension that annoys everyone around them and Ronnie in a hot tub with yet another trashy girl.

Mike: Ronnie’s doing the same thing he got run over for.

The gang stops spying and goes to sleep as Trashy Barbie and Ronnie retire to his ~*bedroom*~. Except they all share bedrooms soo? Maybe he’s in the smush room.

Ronnie *in shower to himself*: There goes my life. Nothing good can come from this.
Ron:

The girl is already in his bed. Despite all the MTV promos for this, Ronnie does not join her and instead goes to drink alone outside and text Jen. Trashy Barbie gets in bed with Ang so I guess she gave up. Ang is like, “did he try to hook up with you?” And TB acts totally shocked, like “OMG, NO, he has a girlfriend!” Um. You literally got in his bed. It’s safe to say that is the implication.

Ronnie goes to talk to TB and Ang and looks like absolute sh*t. He didn’t sleep at all because he spent the whole night fighting with Jen. Which is how I assume he spends every night anyway, this is not news. Then he goes, “Apparently, I’m single.”

Oooooh, you know he now has major regrets that he didn’t smush TB. Like is that why he’s in there? He’s trying to recruit her back into his bed? The moment’s passed, Ron.

Ron: Jen is just disrespectful, telling me she can’t wait to find a guy to raise my child the way I can’t.

Angelina acts v shocked but I swear we’ve heard this from Ron like 200 times. Like, yes, dude, she hates you. Ron continues to list more abuse Jen’s spewed at him, and again, all stuff she’s said before. TB leaves and Ronnie begins taking relationship advice from Angelina. It’s the blind leading the blind over here. Ron tells her that’s leaving Jen, which we’ve heard at least 11 times this season. And last season. MTV v compassionately plays a montage of Jen treating Ron like sh*t spliced with footage of Ron with his daughter. V sensitive.

Ang tells Mike and Pauly that Jen was sending Ron screenshots of Sammi Sweetheart with her new bf. This is material for the Petty Olympics. Ang also explains how *this time* Ron is leaving Jen.

Mike: One minute Ron’s single, then he’s taken. One minute he’s IFF, I’m F*cked Foundation, and then the next he’s on a Ron-page.
Pauly: Tomorrow he’s gonna be like ‘I love her’. The weather today is cloudy with 100% chance of Ronnie’s tears.

Ronnie’s entire personality is now cheating and crying. Meanwhile, Snooki and Mike are arguing about pork roll vs. Taylor ham (???). I’m from California, I have no idea wtf you morons are talking about. Also, I like that the levels of drama this episode are abuse, cheating, and child custody on one side, and over on the other side, we have Hamgate.

Mike: It’s like the status of Ronnie’s relationship. Unsolved.

Vinny is over the roommates’ drama and misses Deena. Snooki decides to kidnap her. TBH, she did nothing but fall down and cry last season, I really didn’t even notice she was gone. Vinny wants to use a trash bag to attack her, Jenni doesn’t want them to assault a pregnant woman. Hard to say who will win.

Vin: These are obviously Angelina’s trash bags because she has an endless supply of them.

Vinny is still bringing up Angelina. Let it go, dude. They decide to put dirty pantyhose over their heads, which is disgusting. The boys write some kind of ransom note. They want millions of dollars and Mike wants deli meat, I guess in exchange for Deena’s safe return? I hope if one of my loved ones ever gets kidnapped, it’s by The Situation. Mike puts together a meat and cheese tray, complete with bread and Cool Ranch Doritos.

Now they all have stupid kidnapper nicknames. Vinny is The Keto Kidnapper, Snooki is The Meatball (which is just her regular nickname, so no one exerted themselves on that one), Mike is The Baguette-Mans (unclear), Ang is Dirty Little Hamster (fitting, as she talks about her swamp ass while this is happening), Jenni is The Boobie-Trapper (Jenni now dresses like a grandma librarian, does she even have breasts anymore?), and Pauly is The Guido Ninja (and he proceeds to kick over a planter, spilling dirt all over the white rug).  I guess Ronnie is excluded.

The Boobie-Trapper: Anyone have eyes on Ron?
The Guido Ninja: He’s crying.

Then we see Ron sobbing in bed with the title: Special Appearance by: Single Ronnie.

Mike: Should we bring Ronnie?
Everyone: No, he’ll ruin it.

They pull up to Deena’s house. Mike opens his Doritos.

Jenni: Leave the salami plate at the front door, ring the doorbell, then have everyone jump the fence at the back and go through the sliding glass door.

Mike steals bits of salami while they try to set the plate down. Ang rings the doorbell. The guidos go through the back door—seriously, why is it just left unlocked? It’s like you guys don’t even listen to Not Another True Crime Podcast. Deena is just sitting on her couch as everyone bursts in. She doesn’t look at all surprised, but to be fair, there was a cameraman sitting with her in the living room to film this happening, so maybe that tipped her off.

Mike is carrying a baguette as a weapon. But like. What’s happening to the meat plate? They bribe Deena to come to the house by giving her the smush room as her own room.

Deena: Did anyone have sex in my bed?
Vin: Well Ronnie almost did, so no.

Then they fill in Deena on the latest Ron scandal. Deena has doubts as to whether she can handle all this BS sober. Same. Vinny comments that Deena and Mike now have the same stomach which is FAT-SHAMING, and is not okay, it’s 2018. They arrive at the house and Deena is like “wow, it’s so nice.” But then she walks inside. The dirt is still all over the white rug.

Deena: It kind of smells garbage-y in here.

Just as I always imagined it did. Deena goes to say hi to Ron who is still crying in his bed. He doesn’t even acknowledge her.

They decide to go to a nice Italian restaurant to celebrate Deena’s return. Ron refuses to go so he can feel sorry for himself. The girls are getting ready and complaining about men, and Jenni announces she’s “going lesbian” (not how that works, again, it’s 2018). OMG, are they finally going to acknowledge Jenni’s divorce, or the fact that she literally has not mentioned Roger at all this whole time? I don’t even think she did last season. Angelina then tells them that her psychic grandmother said she saw Jenni and Roger headed for a divorce. Jenni’s like, “yeah well, I always talk about it.”

I guess just not on camera? Jenni then is like, “haha, I always say that, welcome to marriage.” She has a point, since 50% of marriages go that way, but it seems like she’s trying to play it off like it’s not serious. Which we know that it is. Angelina then claims she is also psychic. K.

Meanwhile, Vinny is ironing his shirt on his bed with a baby iron while Pauly throws his toenail clippings on the shirt. It’s all gross and I have no interest in it. They all go to dinner and Ronnie has not moved. The dinner consists of them complaining about Ron. Next we have to cover Angelina and Vinny’s awkward relationship and then Mike’s eating, since these are the only things going on this season.

Vinny: Oh I’m glad Ron isn’t here because I have this extra chair as a barricade from Angelina.

Vinny ignores her. Angelina wants to know why Vinny won’t talk to her.

Pauly (to Ang): You should make out with him. Did you get your teeth done? Do you have no bra on?
Pauly: I’m giving Vin a hall pass to sleep with Angelina as long as he washes 100 times with hand sanitizer down there.
Angelina: Well if you want to touch , you can, they’re brand-spanking-new. Chris hasn’t even touched them.

Snooki: WHAT? Chris hasn’t touched your boobs yet? Jionni ed mine like a little baby.

F*cking ew. Things I don’t need to hear about. She’s apparently had the new boobs for months. Pauly is v upset by this news. Angelina then tells a way too graphic tale about how the sex with Chris was only good when they first hooked up, and since then, they barely have sex and it’s usually her doing all the work and he has no interest in it. Everyone suggests up Vin for a “good pounding”.

On the cab home, Ang is like, “I’m so honored The King noticed my breasts”, and everyone is like, WTF, The King, Pauly?

Jenni: Angelina should just move on to her fourth engagement because this one is not going to work out.

Dirty Hamster Angelina has been engaged three times and I can’t get a text back, k cool, whatever.

Ang then goes on about how Pauly told her she has nice breasts, and the girls are like um, no, you sad, delusional handwritten book, he said, “Are you wearing a bra?” It’s v scary to see women rewrite history when it’s on film.

In the guys car, the gossip continues.

Tator Tot is Jen’s Instagram. Sidenote: Why are they allowed to have technology??? They should be stuck together with no one else and no activities like the good old days.

IDK, Jen, at this point I think he just wants to not be run over by cars. They get home and the girls are complaining about how badly they want to go to bed. Like, you guys just went to dinner. You are too old for this show. Then they discover that Ronnie is still in bed and hacking up a lung. As if he couldn’t repulse me more. They go into his room and tell him they brought him food. Ron blows them off.

However, the next day, the guys actually get him out of the house for a haircut. Vin says bye to Angelina, foreshadowing their impending affair. Vin is getting ready to have a tantrum about his hair, as per usual. Mike requests a nose hair waxing, which they just do in front of everyone. Like they literally stick hot wax on a stick, shove it up there, and pull. Ew. Ronnie, in typical breakup fashion, is relying on this haircut to fix his life.

Pauly: He cut all his problems away.
Ron: I need a haircut every day.

I really can’t wait until next week when Ronnie and Jen get back together!