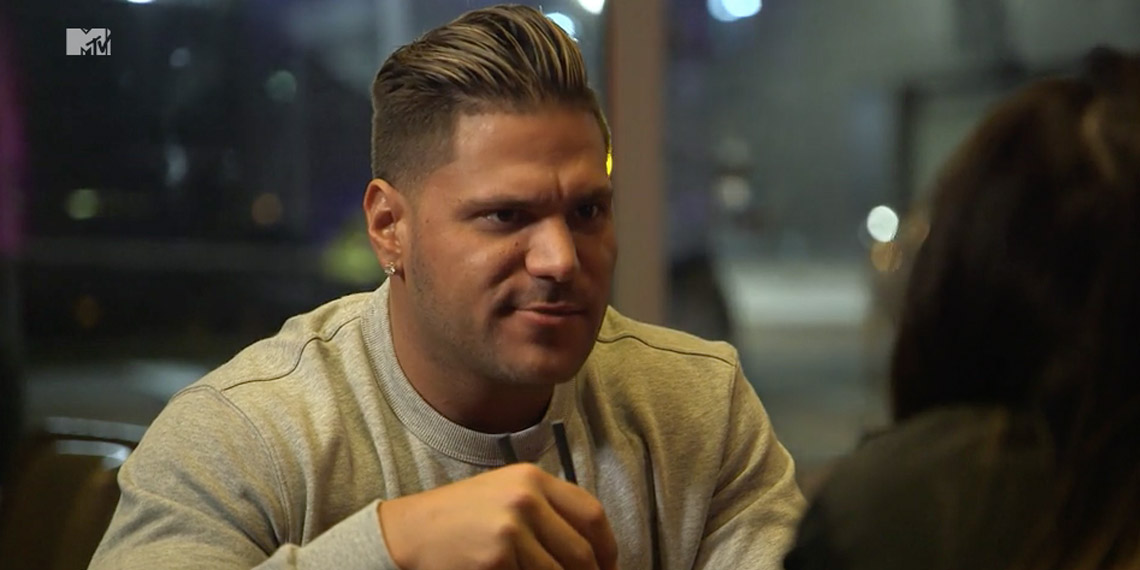 It’s happening guys, Baby Mama Jen is coming to the Shore. Oh wait, Miami. Whatever, she’s coming to see what the fuck her man has been up to while he’s been out of town. Ronnie is claiming he is v excited to see Jen, and yet he looks like he’s awaiting a prison sentence. At least he has Mike to relate to rn. The entire cast awaits her arrival by staggering on the staircase like a prom photo. Ron gives Jen a bouquet of flowers that still has the grocery store price tag on it. C’mon, Ron, class it up.

Ooooh, this is something I didn’t think of before, how fucking shitty is it of Ronnie to go do a TV show when his gf is this pregnant? She’s like, practically a single mom. He’s missing everything. I guess he really DGAF anyway, but still. I’d be fucking furious about that alone. Like, if you knock me up and force me to both get fat and grow a parasite, you better be getting me KFC at 3am if I demand it. Jen, why are you okay with this?

Snooki: Do you speak Britain?

She will fit right in.

Jen does not comment on the fact that Ronnie has a doll of his ex-gf in the house, and I find that disappointing. Wouldn’t you be like, what the actual fuck is wrong with you? I feel like that is really fucking disturbing, but maybe I’m not a cool enough girlfriend. I would not allow my baby daddy to keep sex dolls of his ex around. Call me unreasonable.

So Jenni is talking about how intense it is that they’re doing family dinner with “an outsider” and all I can think about is how strangely bug-eyed she is because her skin is pulled sooooo tight. Or maybe it’s because her eye skin doesn’t move? Idk, Idk, she just keeps giving me crazy eyes and it’s unsettling.

Pauly D & Vin eating while everyone is waiting to pray is me at every family holiday function. The awkward conversation afterwards is also every family function until Grandma gets hammered and causes a scene involving her love of Trump and hatred of minorities. K, Jenni, that’s your cue.

Ron: Hey, this is awkward.
Jenni: So like, do you guys want to get married?
Ron: *visibly cringes*

Someone just out him already, I can’t take this anymore.

Jenni: Ron says he’d rather pay child support than alimony, so I want to know if Jen feels the same.

Jen would rather collect both child support and alimony, obviously. Why else would you fuck around with a D-list celebrity?

I never knew Mike and I had anything in common, but his professing his undying love for funfetti cake just speaks to me on a whole new level.

FUCKING JEN blasts Mike by calling him The Incarceration, and it’s like whoa bitch, you’re stepping around dynamite right now, this shit could blow at any moment. Don’t provoke the bear that will ruin your relationship. Well actually, the relationship has already been ruined, but she doesn’t know that yet. Tell her, tell her, tell her! Everyone here is an accomplice to the crime by hiding this from Jen. Is that how it works? Let’s ask Mike.

Ron: Mike better be careful, I whipped his ass once, I’ll do it again.

So like… does Ronnie just have selective memory for everything in his life? Ron, the wall whipped Mike’s ass, not you. He threw himself into a concrete wall. Technically, he whipped his own ass while you stood there. But okay, take credit. Hey, at this point, let’s just blame that on The Wind too.

Mike is complaining that Jen came for him, like well, what else would they talk about? Ron and Jen obviously have nothing to say to each other. Pauly suggests the group writes Jen a note, like I’m sorry, that would be genius and hilarious. Yet somehow I feel like Ronnie would be able to talk his way out of it again.

What could make the situation more comfortable for Jen? I know, let’s bring her pregnant ass to a strip club! Tbh, the strippers are just mostly naked and barely jiggling their asses, like honestly, this makes me reconsider stripper as a backup career, because they make so much money and most of them aren’t really doing anything. I definitely could not be one of the acrobatic strippers, though, that shit is insane. Like where do you even hire Cirque Du Soleil strippers? Bitches, go to Vegas with that kind of skill.

Vinny is straight-up trying to molest the strippers, like I’m sorry, is your girlfriend’s Instagram fame not enough for you now, Vin? Also, poor Jen, could anything be less fun than being super pregnant and sober at a strip club while your baby daddy ogles naked, skinny bitches?

Me as a stripper:

Ronnie is saying it’s sooooo hard being loyal and in a relationship and a responsible adult. Likeeee…. you never had to do any of this. You could have wrapped your shit up, Pull Out King. Jen is trying to convince him that staying in with her for one night is fine. Shouldn’t he be excited to spend time with her after not seeing her for weeks? Like how is she okay with this? She is literally convincing him that her company is not that bad. You deserve better, Jen, #justiceforjen and #justiceforkhloe, for that matter, because I’m not over that shit either.

Mike carries Jenni directly to bed—I need this kind of service in my life. Then they bring up Vinny humping rando strippers and Vin is like, “What, I didn’t hump her, I just picked her up via her naked ass.” Idk dude, I don’t think that argument is going to help anything. Maybe it was The Wind again. So he decides to call the ~InstaModel~ and tell her. Can’t imagine this won’t go well.

Mike inducts Vinny into the IFF: I’m Fucked Foundation. Instamodel roasts him for being stupid. What’s wrong with you, Vin?

The crew is headed to the beach. Vinny says he loves “clean fun” as much as “dirty fun”, and I think he’s referring to the beach, but like, is he forgetting this is Miami and the water is brown? It’s def not clean. The girls are too ashamed of their mom bods (and yet somehow Deena too?) to go to the beach, are you fucking kidding me? Snooki, what have you become? You were the Queen of Poofs and DGAFs. Who gives a fuck what Us Weekly says? I highly doubt they say anything complimentary about you people regardless. It’s 2018, body shaming is out, guys.

The girls are sad because they actually really like Jen and it’s like Sam and Ron all over again. Yeah I mean, that’s what happens when you date a POS. This is a very poorly planned beach day, like it’s cloudy and sad out and no one even got a tan. The girls round up Jen to ride with them and so of course she asks about Ron.

That’s what you guys get for lying. They all kind of mutter “uh yep,” and Snooki very sarcastically says, “He’s been greaaaaaaaaaaaat!” but I don’t think Jen understands sarcasm so Ron is still safe.

Ron: TONIGHT I TAKE JEN TO NICE RESTAURANT HOPEFULLY IT WON’T SUCK BUT IT PROBS WILL

Why did Ron invite Jen to visit if he’s so disappointed by her presence? If she hadn’t already dumped his ass from watching previous episodes, she definitely would have by now. So Jen suggests getting in the Jacuzzi when they get back and I’m sorry, I know literally nothing about babies, and even I know you can’t use a Jacuzzi when you’re pregnant. Jen, you’re going to cook what little brain cells your kid has.

Ooh, what an interesting turn of events, she’s asking Ron if he’s used the Jacuzzi and what they did in it? Does Jen actually know something? That is weirdly very specific, like she’s been waiting to find a way to bring it up. Maybe not bring it up via threatening to cook your child, but v v interesting.

Ron: I NOT SURE IF JEN IS THE ONE BC SAM IS THE ONE

Like yeah, I would say if you’ve cheated and confessed your love to your ex, you’re probs not super into Jen. But that is just my expert opinion.

Back at the club, Pauly is following Vin around and announcing that he’s cheating. Way to keep him honest.

Vinny: I’m on thin ice for making a joke about saving a stripper.

What is wrong with men??? That is definitely NOT what the problem was. How is he this dense? Pauly takes a picture of Vin’s “Explanation Face” and is showing everyone his shame. Why is Vinny even in a relationship? He has never even mentioned the Instamodel and his mom still cooks for him. Vin is making his sad Explanation Face while once again getting reamed out by the Instamodel while wearing the iPad on a chain with his Explanation Face photo on it. It’s basically Inception at this point. Also? Why do you keep calling her, Vin? She obvi does not enjoy speaking to you. Maybe Vin should not try to fuck randos? Girlfriends tend to not like that.

Jen is leaving and asks Ron not to bring girls home anymore.

Women can be so unreasonable. Ron thinks it’s better for Jen to find out about his cheating on TV than by telling her. Yeah, that’s totally not humiliating. Great work, everyone.

Vin calls his mom and tells her he’s constantly in trouble with Instamodel and his mom literally is like, “don’t tell that bitch shit, outta sight outta mind.” She must be thrilled her son is dating someone whose only goals are to take pics of her own face.

Vin’s Mom: You can fuck other women as long as it’s not intentional.

Ronnie and Vin’s mom have very similar morals. Ronnie is saying he loves Jen but she’s ruining his life by not allowing him to fuck around. Sounds like true love to me. It’s what every woman dreams of. Fuck, now Ron is saying he barely knows her. Harsh. Now Ron is saying he didn’t even do anything, #mansplaining for the win. Pauly’s WTF face is all of us right now. Jenni is going for him, saying he’s the same person he was nine years ago.

Jenni: For Ron’s baby to be a month or two old when Jen finds out, she’ll kill him and bury him on her property.

Close Jenni, she actually just roasted him all over social media, but for someone as fame hungry as Ron, it’s basically social suicide. Can’t wait to see how the IFF club fucks up again next week!

Sam after realizing how close she was to this being her: