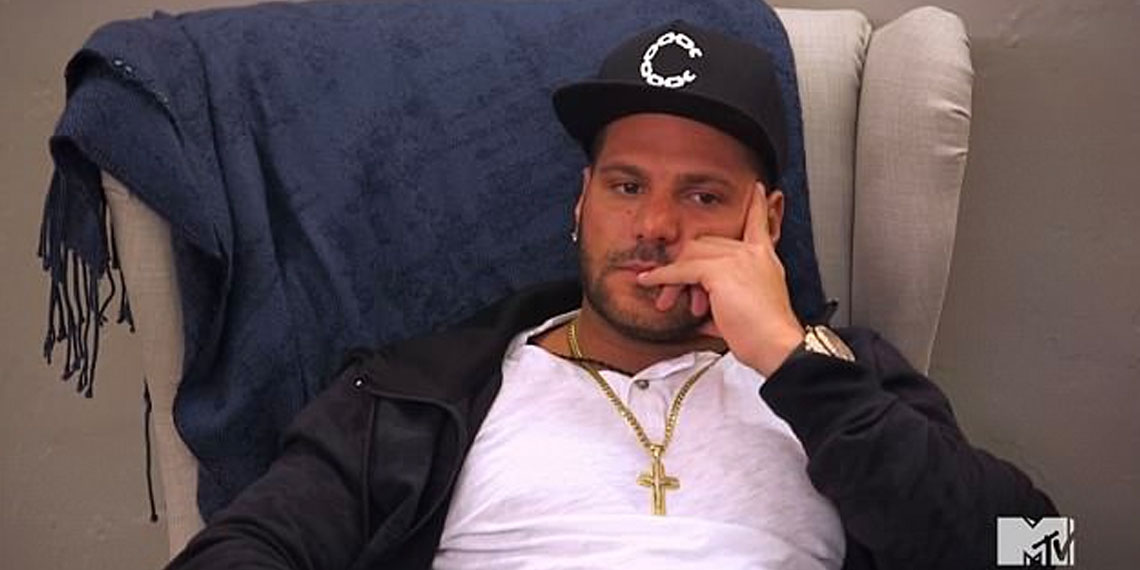 Mike’s girl Lauren called to tell them there is an entire Instagram of videos showing Ronnie rubbing all up on this girl. Ronnie just fucking clarifies whether the video was grinding/sexual or just dancing normally. Lauren says they weren’t grinding in the clips (bummer),

Ronnie: They didn’t catch me grabbing her ass or bringing home? Well that’s not my fault she’s naked, I didn’t dress her. I did nothing wrong as long as it wasn’t filmed.

Wtf, Ronnie. Even the other guidos have wtf written on their faces. He’s already trying to defend his shady ass. This right here, ladies and gentlemen, this is why men are garbage. Also? He’s unaware everything he does is filmed? Now Ronnie is claiming he wasn’t grinding on her and he was doing salsa.

Yes, guys, burn him. FINISH HIM. OMG, now Ronnie is saying he did not shut the door, IT WAS THE WIND? IS HE AWARE THERE ARE CAMERAS? Does he really not notice the big guys carrying cameras everywhere he goes? Also, Vin was into the naked girls too and he had a girlfriend who is a model. Oh wait, an Instagram model. But still. Did I mention men are garbage? Obviously Jen didn’t buy this bullshit, ’cause she promptly dumped his lying ass after last week’s episode.

Look at that wind go, making him touch this girl. Stop it wind, Ron is in a committed relationship!

Ronnie: It was like a one drunken mistake. Grinding on another girl. Molesting another girl. Bringing her home. Getting her naked in a hot tub. Bringing her into the bathroom. The wind blowing the door shut although the cameras have me shutting it. Confessing my undying love to Sam. Saying I don’t love Jen and wouldn’t be with her if it weren’t for knocking her up. One little teensy mistake.

Ron *calls Jen*: You’re obviously not answering because I was dancing with another girl so let me tell you that your eyes are wrong and the wind blew me into the girl.
Jen: Wtf, I was just at the gym?

Dialogue that I think captures Grandma’s entire role on the show this season. It’s okay, we didn’t fucking notice either, Pauly. Oh, now she’s going to be exciting and watch some of the guys get a haircut. Watch the guys get a haircut. Is she aware she’s not their moms? Except she does have a point—why is Vin so obsessed with his hair when he has a bald head? It’s like the smallest bit of hair.

Aw poor Ronnie, he feels guilty. Let’s all feel so sorry for him.

Ronnie: Have I really grown up?
Mike: FUCK NO. *slaps him across the face*

Okay, not really, but that is what should have happened.

Are the girls even on the show? They only show them crying about their children and Deena doesn’t even have kids. Ladies, it’s not the 50’s, you can talk about shit other than kids.

Pauly: Mom told us our little sister has to come.

Jenni, that’s not fucking nice of you to make your children play together when they’re trying to cheat on their significant others. Aaaaaaaaaand Deena falls flat on her face. She should not be allowed to wear heels, this is a fucking hazard. In other news, why is Vinnie dressed like Eminem? Is this club attire now?

Hoooollyyyy shit, Drunkasaurus just fell backwards, vagina in the air, and dumped her own drink all over herself. The guys should have held up score cards like the Olympics. (They do that at the Olympics right? I don’t like sports.) It was actually impressive. She blames Slim Shady for it, though. Idk why all the guys have to leave if Deena decides to be a sloppy bitch? Just send her ass home if she can’t play with the big kids. I don’t fuck around with Sloppapotamuses. Now Deena is crying because she fell.

Deena: I need to call Chris and tell him I disrespected him by falling.

That’s a tight fucking leash you’re on, Deena, if you can’t fall in a relationship. Not a euphemism—just losing your physical balance. Now she’s blaming Vin for making her fall because she was nervous. K. Sounds legit. I’m a nervous faller too.

Poor Sammi doll is still pantsless after Ronnie gave her shorts to that vomiting chick,

Dammit Jen, don’t talk to him. He basically told you he fucked up and you didn’t even ask about it. Now she’s coming to visit. I’m sure that will go over well. I mean, somehow he managed to keep her on board until last week, sooo I guess she really is not paying attention.

Vinny, how can they cut your bald hair any more? Like, his hair always looks the exact same? This is so boring. Oh good, Jenni is here to supervise her baby’s haircut. So to be clear, Jenni is not going out or having fun, but she won’t miss an opportunity to watch haircuts.

Ronnie: I don’t want anyone to tell Jen that I fucked French Fry. I don’t even like french fries.

K, I could have told you he was a psycho from day 1 had we known that. Also, IDK if you guys noticed, but Jenni is eating Quest protein chips. Have you ever had these? I tried to force myself to like them for like six months but they literally taste like the sad cracker you get at church that is the body of Christ. (Is it church? Mass? Temple? Where do Catholics go?) But I guess they’re as bland as Jenni’s personality so she probs doesn’t notice.

Snooki (who I also forgot was here): When is the love of your life’s birthday?
Ronnie: Sam’s birthday is—
Snooki: No, Jen’s.
Ronnie: Fuck.
Snooki & J W-woww: Favorite color? Favorite number?

Asking the hard-hitting questions. Who has a favorite number? Are we six?

Deena: Ron, like, doesn’t have a lightbulb up there.

The mysteries of neurology, explained by Dr. Deena.

Pauly: Kids are the best.

Pauly, you didn’t even mention your OWN kid in your intro. You showed us shoes and cars and shit. But okay.

Ronnie envisioning the joys of fatherhood:

Ron, total scum piece of shit, once again brings up The Incarceration’s fraud shit. IDK, Mike, if you don’t want people dragging you for being a criminal, maybe don’t be a criminal. Ron is trying super hard to get the attention off of him.

Ron: I DO CHEATING BUT MIKE DO STEALING. (read in caveman voice)

You guys are real winners.

I can’t even take Pauly and Vinny bathing Robot Sam. Oh good, Pauly packed a spare head. It’s like he knew this would happen.

Vin: Now she fits in with the other girls in the house, they also got new faces.

Sick burn. Oh fuck, Deena has a point. How awkward is it for Jen to come over and her bf has a doll of his ex? That he’s obsessed with, no less.

Sammi Doll is fucking ready to meet her replacement:

Ron: K NIGHT NIGHT JEN, ME AND SAMMI DOLL HAVE TO BE ALONE NOW. (read in caveman voice)

Okay, Mike is 100% going to out Ron to Jen. It’s like every season of Jersey Shore repeated. Can’t wait to watch Ron’s life fall apart next week!