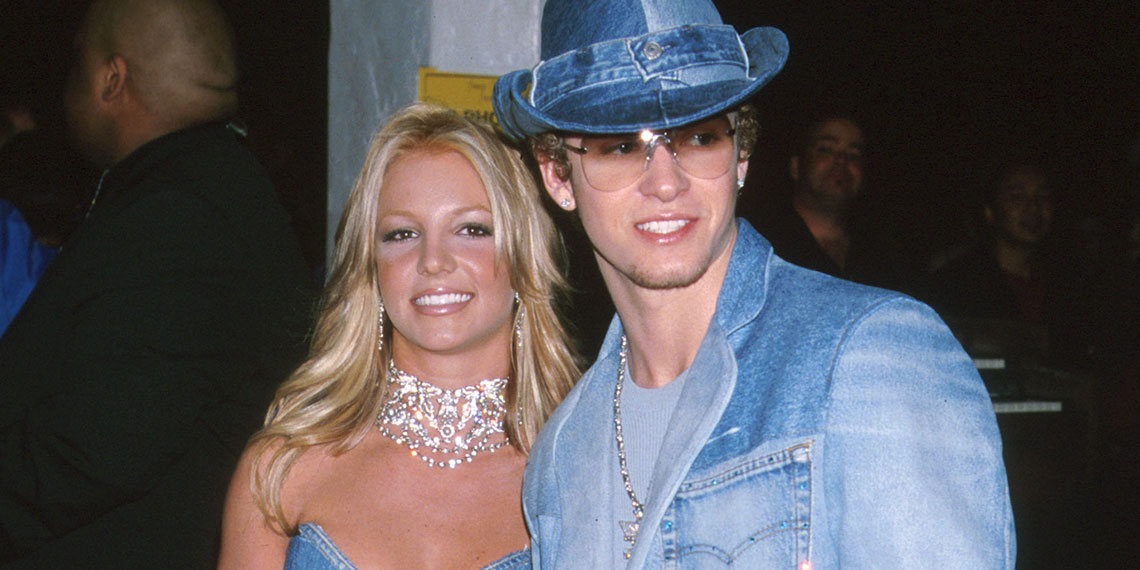 Britney And Justin Reconnected On Instagram, And We’re Nostalgic AF

We’re reaching the point of quarantine where normal rules just don’t matter anymore. We’re eating at random times, drinking at… all the times, and reaching out to people from our past just out of boredom. If you haven’t texted a past hookup or ex during this pandemic, you’re stronger than me, congratulations. Luckily, Britney Spears is taking my mind off of my ex, by very publicly talking about one of her own exes: Justin Timberlake.

On Wednesday, Britney Spears posted one of her now-signature videos on Instagram, featuring some frantic dance moves, choppy editing, and most importantly, ultra-low rise booty shorts. But what was notable about this video was that she’s dancing to one of Justin Timberlake’s songs, “Filthy.” In her caption, she says that this is her “version of Snapchat or TikTok or whatever the cool thing you’re supposed to do these days.” God, I love her.

But then she really brings it home by addressing her song choice: “PS I know we had one of the world’s biggest breakups 20 years ago …… but hey the man is a genius !!!! Great song JT”. And, in that moment, my soul rose up to heaven. Britney’s Instagram during quarantine has been messy in the most delightful way, and this is everything I could’ve asked for.

But then it got even better, because Justin Timberlake commented on the post. He kept it frustratingly simple, with just some emojis, but in these dark times, I will take what I get and I won’t get upset. We know that Justin and Britney thought of each other yesterday, and for that I am thankful.

The nostalgia is overwhelming. #CommentsByCelebs

Naturally, people were very excited by this interaction, and this post got sent in no less than three group chats I’m in. Britney’s sister Jamie Lynn Spears also chimed in, commenting that “Blogs are already plotting their outrageous stories…. you keep having fun and looking cute tho!!” Okay, I don’t know if I should feel attacked right now, but I will refrain from plotting any outrageous stories. And honestly, there’s nothing going on here to even plot about. It’s pretty obvious that Britney and Justin aren’t close or anything—this isn’t a Brad and Jen situation—but it’s fun to see them shouting each other out.

Seeing Britney’s post, and the ensuing comments, made me feel super nostalgic. Last week, we threw it back to 2006 to explain the iconic photos of Britney Spears with Lindsay Lohan and Paris Hilton, but Britney’s relationship with Justin was a whole different era, and I f*cking miss it. Of course, we all remember the classic matching denim looks, but I feel like people forget how sh*tty Justin was to Britney after things ended.

In a Twitter thread from 2018 that’s basically a goldmine of forgotten moments, @PallahAbdul walks us through two decades of reasons “why Justin Timberlake is trash.” The thread isn’t just about Britney, but their relationship is definitely a recurring theme. According to the thread, soon after Justin and Britney broke up in 2002, Justin began a pattern of portraying himself as the victim, and putting the blame on Britney for the relationship going wrong.

In this clip from a Barbara Walters interview, he says that he promised Britney he wouldn’t say the exact reason for the split, but basically says yes when Barbara asks him if Britney cheated. Allegedly, they both cheated on each other, but Justin leaves that part out. Then, later in the segment, he sings a song called “Horrible Woman.” Subtle!!

In his Barbara Walters interview he paints himself as a victim then goes on to sing a song about Britney called horrible woman pic.twitter.com/nngMVbN3oC

Soon after that, he released “Cry Me A River,” which everyone has always assumed is a Britney diss track. While promoting the song, he continued to talk about Britney, and in this radio clip, he admits that he “f*cked Britney Spears.” Considering that they both famously claimed to be virgins during their relationship, this feels like a pretty big betrayal of trust.

Here’s another clip of him on the radio talking about sleeping with Britney pic.twitter.com/q8VulGYMFz

Fast forward a full decade, and Justin was still talking sh*t about Britney. In this video from 2013, he introduces a performance of “Cry Me A River” by vaguely talking about when you love someone, and they turn out to be “a bitch.” Classy.

Before his album cycle in 2013, Justin predicably started bringing Britney up again. Before a performance of “cry me a river” he called her a bitch pic.twitter.com/CyEyaOqjWa

In the nearly two decades since the breakup, Britney has generally kept things more positive, and she even said in 2016 that she’d love to get in the studio and collaborate with Justin. That being said, she hasn’t been above a shady comment or two, and in this video (that looks like it was shot in a bunker), she and K-Fed joke about how “Cry Me A River” is “pussy-fied.”

Honestly, I don’t think these two will ever be friends, and I don’t need them to be. Clearly, a lot of messiness went down in the past, and sometimes you’re just not supposed to be friends with your ex. I’m happy that they can make playful comments on Instagram, but that’s probably about as far as this will go. Actually, I really want Justin to post a video dancing to one of Britney’s songs, but that doesn’t seem realistic.