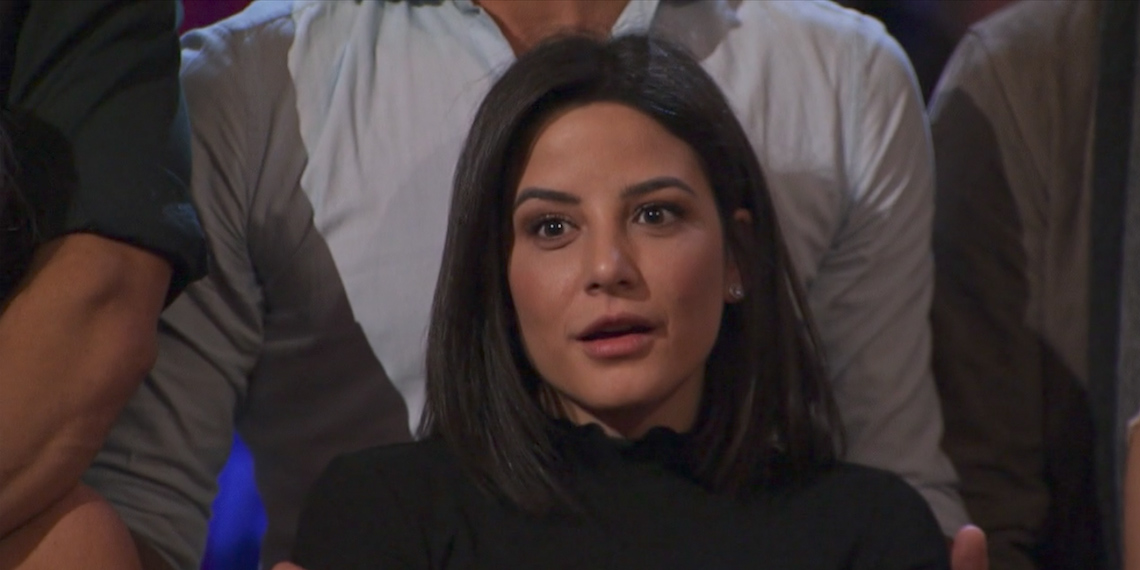 Ohhhhhhh boy, and here we are for another installment of The Bachelor Winter Games—also known as the show that has confirmed the Bachelor franchise’s stronghold on my life, my marriage, and my TV. When I quietly informed my husband that we’d be watching Bachelor television on Monday, Tuesday, and Thursday of this week (we have more TVs but he really loves the couch), he began weeping, quietly. As a reminder, this is the same husband I put through the Fifty Shades Darker review for your amusement, so the next time you say I don’t do anything for you, you sit and think about the toll this is taking on my marriage. Anyway.

We arrive back in scenic Vermont, a quiet winter wonderland BROKEN BY THE CATERWAULING OF ONE YUKI LASTNAMEUNKNOWN. We watch Yuki pulling Bachelor Ben around on a sled, with such exclamations as “BEN HEAVY!” Looks like everyone at the house is getting ready for another exciting winter challenge, and thank GOD they have their names on their jackets because I can’t keep fucking track.

Chris Harrison appears with barely budgeted announcer Hannah Storm to inform the contestants of the downhill skiing they’re about to embark on. Courtney interjects in the way only an Australian can with, “We ride kangaroos like mountains!” I’m sorry what? You did what to what? Never mind.

The contestants take a bit of time figuring out how to pizza and French fry so as to lessen the likelihood of them breaking their necks and bankrupting the Bachelor franchise with a lawsuit. How many waivers do you think these idiots had to sign before embarking on this *INCREDIBLE JOURNEY TO FIND LOVE* ?

Clare, resident franchise hag, declares her love for The Bachelor and that she’s willing to die. I don’t have a comment for that. However, she pulls off a STUNNING downhill performance in that she manages to stay upright without hitting a tree. Ashley I., Bibi, Stassi, and Tiffany all eat shit. The athletic ability of these contestants is questionable. Yuki goes slowly down the mountain, screaming; is all of us.

A true representation of how this show is going

The men are up next, and my money is on Kevin, since he hails from America’s Hat snowy Canada. Not surprisingly, Kevin, Dean, and Ben do the best while Josiah, Christian, Kangaroo Rider Courtney, Michael, and Luke fail miserably. Since Dean wins for the men in a stunning upset, power couple Deansley have two date cards and decide to gift one to desperate virgin Ashley I and Canadian Tom Brady.

Ashley I And Kevin’s Date

So, from what I can tell, Ashley I and Kevin wine and dine before their Ghost-inspired pottery class, which I’ll get to in a minute. Ashley I immediately lays her balls on the table and proclaims, “When guys find out I’m a virgin, their dicks go soft.” WOAH. ALRIGHT. Not cutting corners, I see. The rest of the convo goes something like this:

Kevin: I wanna make sure you feel good about the sexing for a VERY LONG TIME

As I and the rest of the audience wonder about Ashley’s leather trench/dress ensemble, they head to a pottery class to make clay dicks. Clearly these people either haven’t seen Ghost and walked right into this trap, or the producers just got really fucked up and decided to pay homage to their fav 80s movie.

The most upsetting part of all of this was the clay being rubbed into Ashley’s face as a result of Kevin’s v aggressive pottery kissing.

Back At The House And The Mass Bachelor Exodus

Back at the Vermont Bachelor Mansion, we see that Clare and Christian ARE STILL TALKING ABOUT THE FUCKING JACUZZI. I really had no idea that Germans considered Jacuzzis as sacred as sauerkraut and beer, but apparently I am not as culturally in the know as I once thought. Despite the spat, Clare and Christian get into the Jacuzzi. Christian makes some mention of trusting his “sto-mash” which I believe roughly translates to going with your gut. Clare is clearly not getting it, they stare at each other a bit, then both head back into the house. After all the talk of hot tubs and dates and angry Germans, this was the epilogue we deserved?

Meanwhile, Dean and Lesley have gone on date number two, which we don’t see much of and I’m not upset by. The rest of the contestants take this opportunity to talk shit about Dean, which feels forced and weird—much like this entire program. Lesley asks Dean some tough questions, Dean bats his eyelashes, and everything is fine.

Clearly, the meat of this episode was reserved for the absolutely overdue exodus of several non-attached contestants. First up is Tiffany, who is sitting on the porch in the (I assume) -20 degree weather to make a point about being sad. She decides to leave and no one really notices. She makes mention of a 32 hour flight, Yuki sadly waves a flag (where did she get that?), and we see our last of Tiff.

Next up is Ben, who apparently saw Tiffany’s departure as a sign from God that he, too, needed to go be sad elsewhere. I guess when you literally say “dating is a chore,” being in a mansion that requires you to date on national television seems a lil weird.

He has a heart-to-heart with Ashely I, which seems misguided considering this girl has cried her way through several Bachelor shows and touts being a virgin like a proud, white flag. Chris Harrison appears like a Jedi to offer sage advice listen and offer nothing while Ben cries and talks about how REAL his and Lauren’s relationship was. What comes out of this is Ben deciding to leave and be sad at home; followed quickly by Michael, who know one really even knew was here.

Then, in the saddest scene in Bachelor history, Chris Harrison reappears to talk to Yuki. IN JAPANESE. WHEN DID HE LEARN JAPANESE? HOW LONG HAS HE BEEN ABLE TO SPEAK JAPANESE? DID HE KILL THE JAPANESE BACHELOR HOST AND ABSORB HIS POWERS? WHAT ELSE AREN’T THEY TELLING US?

Anyway, that conversation goes something like this … in Japanese:

Yuki declares that she “leave back home” and everyone is hysterically crying. I’m crying. The earth begins to implode when Ashley and Yuki cry together. “Bye bye Bachelor house.”

The Kissing Contest And Rose Ceremony

Because everyone is already paired up and The Bachelor fans demand blood a loser, Jojo, Arie, and Rachel show up to judge a forced kissing contest between couples that barely know each other. What follows is some truly incredible television as the couples begin practicing.

Clare and Christian stare at each other’s faces for a few minutes before deciding they aren’t meant to be. I find this especially hilarious considering Clare had sex on national television several times, yet wanted to be with the guy who couldn’t get up the gumption to touch her face. They sniffle into each other’s mics and disappear into the night.

The survivors remaining contestants line up and are totally ready to begin the contest. No one mentions Lilly’s Pippi Long Stockings-meets-sexy-farmer ensemble which looks slightly out of place considering the raging blizzard outside.

What commences is an atrocious display of mouth sucking, the likes of which I hope to never see again. Ashley and Kevin slurp on each other’s lips. Dean and Lesley do a cheerleading routine. Lilly and Courtney are cute in a foreign sort of way. Jojo is loving this shit since she’s like, so fun, and Lilly/Courtney are also, like, so fun.

While Bibi and Jordan make out, the camera pans over Ally, whose body is clearly violently rejecting the idea of making out with Josiah. Don’t blame it on nerves, girl, I did the same thing at my first high school dance after making out with a nerd I mistook for someone much hotter.

What followed next made the previous two hours of this absolute train wreck ALMOST worth it. Ally runs away and ACTUALLY THROWS UP. Josiah attempts to comfort her, but his totally nonchalant attitude when faced with kissing someone who just vommed is V off-putting. Like, did she brush her teeth? Did she Listerine? Did she gargle? No one knows.

They proceed to actually make out. I’ve reached a new level of discomfort.

To try and get the vomit feeling out of America’s collective mouth, human muppet Stassi and Luke go in for the kill. I wonder what lip injections taste like?

The winners are Kevin and Ashley, followed by Luke and Stassi, Courtney and Lilly, Jordan and Bibbi, and Dean and Lesley.

Josiah and Ally are sent home, since barfing then making out makes everyone feel nervous and sticky.

We only have one more episode of The Bachelor Winter Games, people. Then I can get my life back.