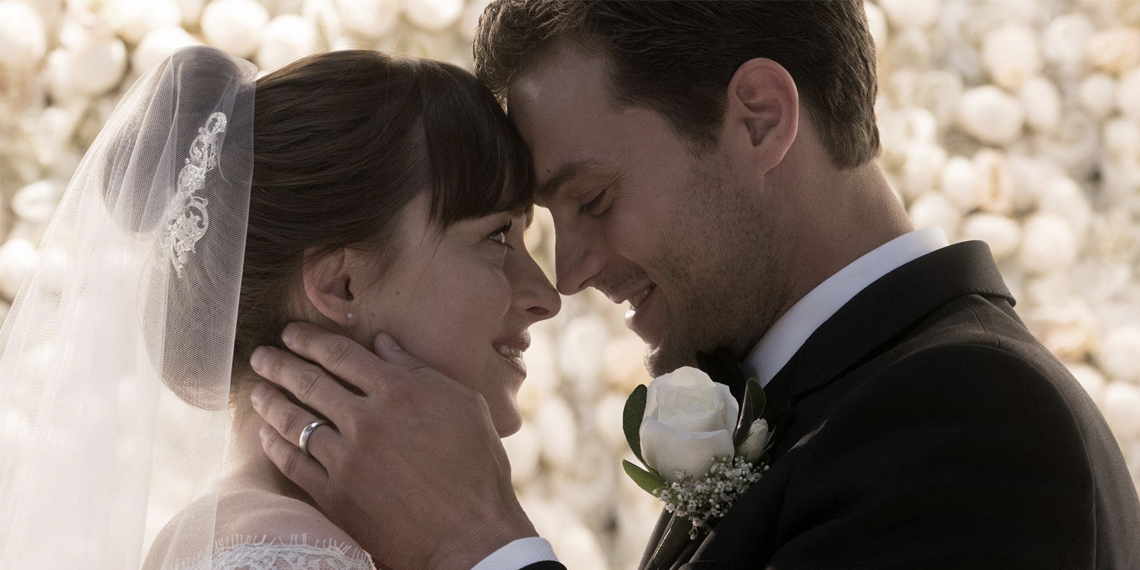 When I received an email on Friday asking if I’d be willing to see and review Fifty Shades Freed in the interest of entertaining Betches’ readers, I reluctantly said “k.” On Sunday, February 11, I dragged my husband to see this absolute abortion of a movie with me. It’s so bad that I don’t even feel bad about using abortion as an adjective. Here we go.

A quick look at the other reviews of this movie circling the internet should let you know that you’re in for a bumpy ride. Full disclosure: I brought a full pint of artisan cider (sry I’m so fancy) into the theater with me. I was done with it in 15 minutes. My husband assured the cashier that we were only going to see this so I could write a scathing review, our marriage needed no spark, and, yes, he required Twizzlers, a large popcorn, Raisinettes, and a large Coke to get through this. He looked upset as we entered.

I’m going to ASSUME everyone already knows the background of this movie, but if not:

Anastasia Steele was a virgin college student who, through some trick of mommy-porn writing the universe, ended up interviewing Christian Grey, a 30-something billionaire. They fall in love thanks to her SOMEHOW AMAZING BLOW JOB SKILLS, Ana signs a contract with Christian to be a submissive and play in his red sex dungeon (sans butt play, at least in the first movie). He goes too far, she gets mad, they get back together, they get engaged, and are now locked and loaded in the world’s healthiest marriage. That’s literally the plot—throw in some jilted ex-lovers and weird mommy issues and boom, 50 Shades trilogy. I want to note that I could literally shit a better storyline than what follows.

Act I: Ana And Christian Get Married And Go On A V Expensive Honeymoon

We open on Ana and Christian saying their “I do’s” and enjoying what is clearly a daytime wedding. They leave literally in the middle of it because world’s best and not-at-all-controlling husband, Mr. Grey, insists he’s “tired of sharing” Ana with everyone else. It’s just her wedding. No biggie. I’m sure her parents and great aunt who flew in for this v special occasion understand. Fuck em, amirite? Anyway.

Christian brings Ana to a jet and she’s all “WOAH YOU OWN THIS?!” Bitch, he spent the last two movies getting you new cars, having his personal security follow you, taking you on helicopter rides, and literally jizzing money. OF COURSE HE HAS A FUCKING JET.

What follows is a honeymoon in Paris and Nice. How PEDESTRIAN, Christian. He’s a billionaire and they’re in Paris? Yawn. We get a glimpse of Christian’s weird control issues when he freaks out about Ana showing her titties on A NUDE BEACH. To punish her, he handcuffs her hands to her feet in what looks like prime cramp territory and bangs her. I assume the other couples in the theater will use this as spank bank material to spice up their marriages later.

After their handcuff sex sesh, the honeymoon is cut short by a call from Christian’s assistant saying that someone broke into Grey Enterprises (still unsure what Grey Enterprises DOES) and stole some personal files. After a super tech-savvy zoom-in with the security cam, Ana discovers the thief is Jack Hyde—her old pervy former boss from the last movie that no one saw. Could it be he’s still mad about Ana spurning his love and Christian firing him?! THE PLOT THICKENS.

Act II: Back In Fucking Seattle

Christian and Ana come home from the honeymoon and Ana is totally aghast at the idea of “running the household” since she’s, like, a quasi-billionaire, now, too, and has all kinds of slaves servants to boss around. In no mood to deal with the help, she cooks dinner, makes a comment about being preg one day, and Christian recoils as if someone stole his special sex jeans. “Don’t you wanna have kids some day?” Ana asks. Apparently, this conversation was NOT had before they got married, which, I guess considering they once had a contract specifying what kind of things Christian was allowed to stick into her butt, is neither surprising nor a priority for this happy couple.

Ana gets back to her job and is SHOCKED that her office is totally different. Like, where’s all her shit? Her weird assistant, Liz, informs her that it’s been redecorated for the new boss? WHO TF IS THE NEW BOSS? SURPRISE! ANA, IT’S YOU! Apparently promotions are handed out like Molly at a club and Ana has been promoted through her SHEER business savvy and not at all because her controlling husband bought her company. So blessed, so moved. I hope someday my husband buys my company because, only then, can I aspire to get that juicy promotion. #glassceiling

After their spat over last names, Christian whisks Ana away to a dilapidated mansion that he bought without telling her. She’s instantly smitten and doesn’t at all question the amount of money he just spent on this piece of shit which will clearly need more than 10 Joanna Gaines’ to up its rustic chic aesthetic. Enter the porn star of architects—Gia—who clearly became an architect based on her mastery of math and not on her phenomenal boobies. She gets a lil too close to Christian, Ana tells her to fuck off, and we literally never see her again, oh wait yes we do for a super important plot point. STAY TUNED.

It was at about this point in the movie that I looked over to see my husband covering his face with his hands, and I truly felt sorry for him.

Act III: The Plot Thickens But Not Really

After the mansion adventure and v exciting car chase, the newlyweds are back home. Christian announces that he has to go to New York for meetings and Ana is obv coming because she is a woman with a small brain will be in total danger from the car maniac and Jack. Ana is like, lol, I work hard for the money, bitch, and then segues into Christian needing a haircut. Cut to a sexy hair washing scene. Wondering where the scissors are, Ana looks in Christian’s office drawer and finds GASP A GUN OMFG. She asks Christian why he has it, and he’s all whatever about it. End scene. “Did he ever get his hair cut?” my husband asks, v concerned. I don’t know. No one knows.

Apparently the sexy haircut or not-haircut convinced Christian to allow his wife to keep working and stay home while he goes to New York. During this time, Ana goes drinking with her friend Kate instead of going home, which is so diabolical of her. When she does finally get back to the apartment, Jack is waiting with a knife. How he got in, we don’t know. How he got past a doorman, security system, I assume lasers, and bolted doors is incredible. Maybe Christian firing him was the best thing that’s ever happened to Jack. Maybe he’s meant to be a master criminal. He’s quickly subdued by Ana’s security team. This scene led to the best line(s) in this whole fucking movie:

Security person 1: “You better restrain him.”

Security person 2: “I don’t have anything.”

No one laughs. Everyone in the theater is already dead.

At this point the couple takes a break in Aspen (ASSSSPPEEEEENNNNNN) with Kate, Elliot (Christian’s brother who is conveniently dating Kate), Christian’s sister (played by Rita Ora), and Rita Ora’s bf. They get to an Aspen mega-mansion and Christian plays the piano and literally sings. It was at this point I was praying for more alcohol. None came.

Because we didn’t have enough story lines going on what with sexy car chases and genius criminals, Ana goes to see a gynecologist and finds out she’s pregnant since she missed her contraceptive shots which were clearly outlined in her contract with Christian. How dare she. When she tells Christian, he freaks out, not ready to “share” Ana with anyone. This seems like a v healthy and normal conversation.

Furious, he goes out drinking with his old mistress, Elena, played by Kim Basinger in the last movie but who clearly wasn’t budgeted for in the third installment. Ana finds out and angrily showers, ignores Christian, then argues with him while PUTTING HER STOCKINGS AND BOOTS ON BEFORE HER BRA LIKE A FUCKING MANIAC. I am an adult woman, and I can tell you that when I argue with my husband, boob privileges—including viewing them whatsoever—are out the window. Anyway, she storms out and goes to work.

While “working” and def not fantasizing about butt plugs, Ana gets a call from Jack, who has somehow gotten out on bail despite recently breaking, entering, and holding a knife to someone’s throat. Again, criminal mastermind. He has Rita Ora and is totally going to kill her unless Ana gives him $5 MILLION NOW IMMEDIATELY. Oh, and she isn’t allowed to tell anyone because of course this guy is a fucking genius.

Through some really Oscar-worthy screenwriting, Ana gets the money and is met outside the bank by NONE OTHER THAN LIZ THE WEIRD OFFICE ASSISTANT. She’s working with Jack because he blackmailed her with a sex tape, which, sad.

Jack is all totally about to kill Ana, and tries punting her baby through her ass, but, SURPRISE MOTHERFUCKERS! She brought the gun from the desk that you’ll remember from the sexy not-haircut scene! She shoots Jack, then passes out after sustaining some bruises. Christian gets her to the hospital and the baby is totally fine (head’s possibly a lil dented like an old Cabbage Patch Kid, but fine). Everyone is happy.

Once home, it’s revealed that Jack and Christian were actually together in the same Detroit foster home. Somehow Christian has blocked this out … kinda like how I hope to block out this two hour experience.

Christian was adopted by a rich family, Jack wasn’t. Christian feels bad now. Ana reminds Christian he’s a great and respectable man who “treats people well.” Guess she kinda glazed over the whole “I have to beat people/handcuff people I love/wear the same pair of dirty jeans to get off” thing.

We end with a montage of all the romantic moments the couple has shared. Ana, naturally, goes into the dungeon and waits for Christian to do stuff which, I assume, involves ice cream, butt plugs, whips, vibrators, or some combination of all four. I breathe a sigh of relief. My husband, clearly emotionally distraught, returns home to watch the same curling play on repeat for four to six hours. We don’t speak about what has transpired. We never will. We throw away all of our ice cream.